British Summer Time Hyde Park. Not something I’d usually have gone to but with cheapo tickets on offer and the chance to see a few quality bands, how could I refuse? Friday headlined by Sabbath (seriously, come on) and a Thursday afternoon with a cracking early line-up and Arcade Fire headlining.

Let me take you back a short time in history to a rainy, mud-sodden Glastonbury 2007. It was Friday. Arcade Fire were to play the Other Stage prior to Björk’s headline set. At this point I was a big fan; Funeral was an excellent album full of triumphant teary lamentations, and I was hyped to see them for the first time at one of the biggest events in the world. It was going to be big. It was going to be great. It was going to be un-missable.

Well I went and fucking missed it! Having gotten far too pissed sampling the local country cider (well, Brothers) I stumbled about Worthy Farm like an obnoxious drunken egg man, falling into a booze addled coma in my tent and snoring the revelry-filled evening away as the band took to the stage with me in absentia.

In the interim years Arcade Fire became, as I would describe with beautiful poise and eloquence, ‘total utter shite’, and so the loss of not seeing them in 2007 never really burned as strongly as it could have. But there was always that sense of what might have been. Maybe if I were there in the crowd that night my glittering aura and inspirational presence would’ve halted their sad decline into wet-as-piss dad-rock banality. But I wasn’t.

So here we are 7 years later and the chance to see them again has presented itself. Will we embrace as friends having since gone our separate ways? Well?

Well, Thursday got off to a bloody marvellous start as Future Islands absolutely slayed the early afternoon crowd with rapturous synth-pop bear hugs. The music is great but it’s singer Samuel T. Herring who totally enchants the crowd, his voice veering from soulful croon to fearsome metallic growl literally within seconds. This man knows how to work a crowd and his papa bear dancing comes over as both endearing and vulnerable. Teetering on the edge of ridiculousness but never hurtling over it, he encourages the crowd to ignore the blazing (and I do mean BLAZING!) sun and dance like it’s dawn: “don’t be afraid to dance, it’s late where we’re from!” 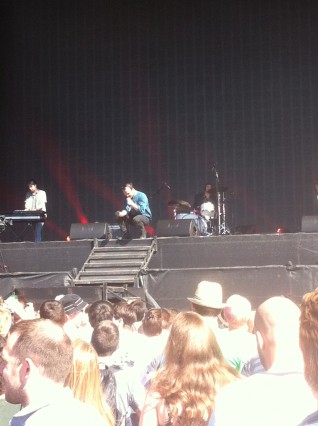 Following from Future Islands, Wild Beasts bring their brand of filthy-mouthed, jangle-dandy indie. They’re a fucking cracking band but the newer slinky synth seductions of Smother and Present Tense are slightly lost in the hot summer air. ‘Hooting and Howling’ stands out like a sore digit and gets everyone dancing. As smashing as the new songs are it made me wish they’d stop with the moodiness and get back to the guitar rubbernecking operatics of ‘Limbo Panto’ and ‘Two Dancers’. Hayden Thorpe and Tom Fleming’s voices are at times fragile and beautiful, masking the grubby guttersauce chat that’s actually emitting from their gobs. Totally charming. 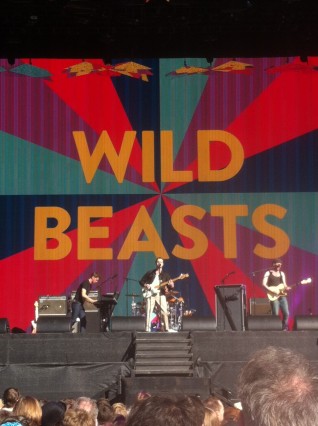 Without sounding like an old fuddy-duddy, Jake Bugg is absolute bollocks. So, not being a 14-year-old ASBO gimp, I give him a swerve to stock up on beer and food. Mainly beer. It’s a better use of my time; I’m not on an ASBO after all.

Then it’s time for the headliners. I made it to 8.30 PM! No stumbling about and falling asleep covered in shit for me this time, no! But by the time Arcade Fire have taken the stage and launched into the wholly laughable ‘Normal Person’ I’m wishing it was 2007 again. The darkness of Funeral has been replaced with a plodding, joyless descent into dreary by-the-numbers stadium indie. The set’s opening songs are particularly tepid, blurring into one mass of yawn, and it’s not until they crack out oldies ‘Neighborhood #1’ and ‘Crown of Love’ that my interest is piqued.

It’s not enough though and the damage is done. ‘Keep the Car Running’ gives the briefest of respites but the onslaught of faux disco bullshit totally capsizes my strained enthusiasm. I feel as though Justin Timberlake has just felt me up in a shit nightclub. The bad sod.

Overall though the day had been a bloody cracker, Future Islands and Wild Beasts were belting in the beaming heat and more than made up for the turgid dirge of an evening with Arcade Fire. It was a synth triumph in the sun.

Having unfortunately missed most of Friday’s bill due to work (we all have to do it don’t we?), losing out on seeing Soulfly and Motorhead (I’ve seen them before so fuck it), I get to the stage just as Soundgarden begin their set.

Now I’ve never been a big fan of the ’90s Seattle music scene (or ‘Grunge’ as we called it, yeah) and Soundgarden for me were the epitome of that sound. It’s all a bit too clean and safe for me. Chris Cornell’s gruff bluesy voice always caused me to come out in bouts of shrugs.

Their afternoon set affirms my position. They blast through the entirety of 20-year-old hit album Superunknown with passion and energy, I can’t deny that and I’m sure if you like them you’d have been more than happy, but I’m not. I’m bored. I know they have some heavier songs in their back catalogue so why the fuck not chuck a few out, aye? Instead we have to make do with ‘Black Hole Sun’, which is still the bland commercial dullard it always was. With my eyes closed I could easily be watching Lenny Kravitz. Which really isn’t a good thing is it? Not even for Lenny Kravitz.

Still Black Sabbath are next.

And when it’s their turn they really don’t mess about. They fucking rip through their set like their lives depend on it. Which it probably does doesn’t it? They may now be as old as Satan himself but the music feels like it hasn’t aged a day. Ozzy Osbourne is a transformed man on stage, from the doddery televised pensioner of old into a sort of heavy metal batrachian-demon, excitedly ribbeting his way across the stage as though chasing an eternally damned fly. He may forget the odd lyric here and there but he still puts on a ruddy good show. 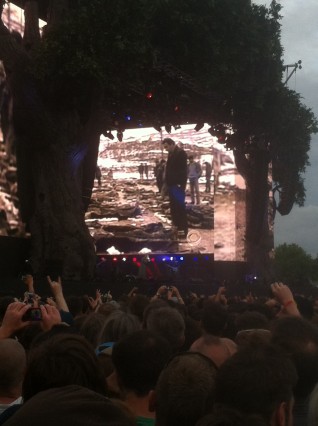 Tony Iommi and Geezer Butler are just fucking ridiculous too. Seriously, the riffs and bass are immense. Starting with ‘War Pigs’ the set rarely disappoints; even the newer songs get the massed heads a-banging. ‘Black Sabbath’ is big, proper big. It’d be hard to balls up such a stone cold classic, and you know what? They don’t. It really does feel evil. Like having a boozy shindig in a Hieronymus Bosch painting.

During the song, the backdrop licks the sky with flames as Hyde Park burns with Heavy Metal goodness. Then as if to fight back, the heavens open and it starts to rain. But god can’t dampen this fire and the set ends with the always molten ‘Paranoid’, like a defiant middle finger to the liquid secretor in the sky.

They may not make new music, they may never play live again, but for now they have set fire to the heart of London and I’m happy to dance in the flames.

So after two days I leave Hyde Park partially scorched, but with memories of the whole damn thing. Some sadly of Arcade Fire.

Which is something I can’t say about 2007… now where’s the cider? 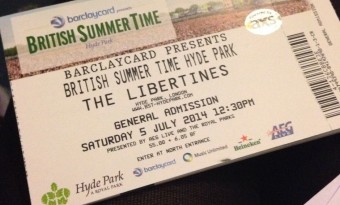 A cash-in reunion for a cash-cow festival, but could The Libertines muster some of that old magic as they headlined Saturday's British Summertime Festival?
Read More