“Aesthetics and Politics are neither equivalent nor separable. Black metal fandom all too often entails a tacit endorsement or strategic looking-the-other-way with regards to the racist, anti-Semitic, sexist and homophobic bullshit politics that (still) pervade the scene, on behalf of either escapist fantasy talk, shaky invocations of art as a crypto-religious path to transcendence, or–the oldest cop out in the book–the quietist declaration that “I just like how it sounds.” Just as blasphemy both affirms and assaults the sacred powers it invokes and inverts, so too this record celebrates black metal and offers queer critique / mockery / profanation of its ideological morass in equal measure. Mixed emotions about a murky, diverse and self-differential scene are all very well, but, as Barack Obama is so fond of saying at press conferences just before legitimizing drone warfare, let’s be clear: No apologies, no excuses, and no escape clauses are hereby offered. Murderers are murderers. No safe space for fascist garbage. The Soft Pink Truth hereby abjures black metal homophobes, racists, and Nazis categorically and absolutely: MAY THIS CURSE BIND! Remember Magne Andreassen!”

On the Thrill Jockey website, this text is labelled ‘Disclaimer’. On the inside cover of ‘Why Do the Heathen Rage?’ it is titled “Confessions of a Burzum T-shirt wearer”. It is accompanied by two photos of Drew Daniel, one half of Matmos, and one whole of The Soft Pink Truth. In the before photo, he has his thumbs up in front of a burnt out church, in the after, he’s just looking stern. The change is in the Burzum t-shirt. The second has additional text etched on it: ‘Fuck Varg’s politics’.

I’ve come to this record as a fan of SPT, a fan of Matmos, and a fan of esoterica in a way that means I’ve enjoyed Black Metal, without ever having had to think about it. It’s never been my scene, and I’ve never been all that aware of it, but ever since a friend visited with a surprisingly delicate compilation made up of ‘the quiet songs from albums by Black Metal bands, I’ve been willing to give it a bit of space. In its quiet moments the Black Metal scene has apparently produced some of the nicest folk I’ve ever heard. So when I heard The Soft Pink Truth was doing another covers album (his first, ‘Do you want new wave or do you want The Soft Pink Truth?’ is pretty self explanatory: all covers of new wave punk and hardcore bands), this time turning his attention to the satanic Norwegian subculture, I was just excited.

But the liner notes point me towards dark and horrific stories. I’ve always tended to view metal satanism as either just a particular type of storytelling, a flair for the dramatic or just an aesthetic rejection of the mainstream. Sure, there’ll be some people who start believing in it, but most will be aware of it as a musical scene with religious trappings, rather than an actual religion. But music is personal, and the personal is political. And we’re talking about a scene where some of the biggest names are convicted murderers. Varg Vikernes, aka Burzum, stabbed a collaborator to death and is an explicitly racist neo nazi. Magnes Andreassen was stabbed to death by Faust, drummer of Emperor; stabbed 37 times, and repeatedly kicked in the head for being “obviously a faggot”. Remember him. I had to stop researching black metal crimes, because I felt sickened.

So there’s real darkness here, real suffering. And Drew Daniel is taking pains to identify it. He is unwilling to be misinterpreted. He won’t offer excuses, but refuses to endorse the politics entwined with his subject of choice, even as he chooses to celebrate the music itself.

Profaning the profane is the order of the day, but first a sacred space is carved out. While Daniel may be undermining and subverting the aesthetics and politics of his Black Metal, he is intent on leaving its sense of ritual. The opening track is a spoken word invocation by radical faerie Moonrose Shaundel Angeles, lifted from Arthur Evans’ Witchcraft and the Gay Counterculture. Drew and Antony (yes, that Antony) summon spirits of femininity and the androgyne to protect and empower them. Along with the final track, a brief icy electronic profanation of a piece that is already a parody, Impaled Northern Moonforest’s ‘Grim and Frostbitten Gay Bar’, they draw a protective circle around the content between. The queer ritual at the edges makes a space for us to delve into the core of this scene, the core of this album, and pull out it’s entrails.

Which means, finally, I feel I’ve said enough to talk about the actual fucking music.

It starts roughly as you’d expect, a pounding drum, a bass synth, and some aggressive chanted lyrics. Venom’s Black Metal is an obvious starting point, and it’s got the perfect pace to be pushed into a gabba-esque pounding rhythmscape. It’s fairly sparse, but it lays down the gauntlet. This is going to be rock solid dance music, interesting even without the set dressing. The vocal keeps the urgency and passion of the original, even as Bryan Edward Collins’ sultry, pouting delivery undermines its intent, turning the unholy claims to power into something oddly seductive.

The trick is repeated on ‘Ready to Fuck’ featuring Wye Oak’s Jenn Wasner singing a sensual RnB version of Sarcofago’s screaming statement of deviated sexuality. Wasner’s moans are chopped and sliced, looping around a pleasingly rounded bassline version of the key riff. The breakdown is almost playful: monstrous groans, excited moans, and childish basslines slow down and rise again, as Wasner gets back into the sucking, and proclaims herself ready. And the fuck and the dance are rendered the same by the beat.

Satanic Black Devotion is my highlight. A surprisingly straight finger-picked guitar melody opens, as a chorus of voices slowly join together and become monstrous. The guitar only dies once a heavily processed metal scream is dominating, and the synths and drums have started to join the fray. There’s a section which would almost sound authentically black metal, if it weren’t for the drum machine. But it strips into a bass line, and along with samples of Snap’s ‘I’ve got the Power’ the groove returns. You’re slowly building to another climax, unsure if it’s going to be a rave anthem drop or another metallic screamfest.

Of course, this is The Soft Pink Truth. You don’t have to choose between the one or the other.

The key here is this constant mashing of subcultures. Whether you’re recognising the screams or the sacrilege or the basslines or the beats, your memories are being plucked at and referenced. Drew Daniel is incredibly music literate, and his passion for his subject matter, whether disco or metal, comes through in his ability to make one sing to the other.

The second half of the record includes nods to breakcore, jungle, disco and every flavour of house and electro. It’s the darkness of the lyrics that makes it coherent; the struggle between pastiche and homage becomes less important, and it just feels like an excuse to tie together some incredible feats of production and arrangement.

The refrain “Be the hammer, the desecration master, join us, we are your future”, repeated in a range of different screams, distortions and tones, doesn’t feel ridiculous, even as it wilfully mocks itself. And it’s because of the structure here. Every piece hits perfect dance music peaks and breakdowns, even down to the occasional screaming, concrete climax. Synths wrestle with beats, singers wrestle with screamers, irony wrestles with sacrilege and the profane cuddles up to the groove.

Every Soft Pink Truth record has been a question. Do you party? Do you want new wave? Why do the heathen rage? The first purportedly arose out of a bet (Matthew Herbert challenged Drew to make a house record, and happily published the output), although Drew’s partner Martin Schmidt, the other half of Matmos, claims it was mostly to stop Daniel from turning Matmos into a techno act. The last two SPT albums have been these explorations of subcultures, and I think it’s this exploratory, playful process that plants the questions on the fronts of the album.

The dichotomy between the queerness of the record and the homophobia of the subject matter cannot be fully accounted for with words. The disclaimer is important: to make it explicit, because music is so bad at speaking specifically (presumably one of the reasons it’s possible to enjoy a music that occasionally explicitly wants to kill you), but it does not provide the answer.

To some extent though, the music does. Music this powerful and engaging rises above itself. The profanation is completed by the sacrament of a well shaken ass. Drew Daniel has taken the power of black metal, and turned it into a power of his own. It’s masterful, actually, a brilliantly produced record, that will challenge your expectations, make you intrigued by the subculture behind it, whilst, hopefully, successfully abjuring it’s nastiest products. The musical is political. The synth successfully queers out the hate.

Why do the heathen rage? When they could be dancing?

Lay the record on, and find out.

Venetian Snares - My Love is a Bulldozer 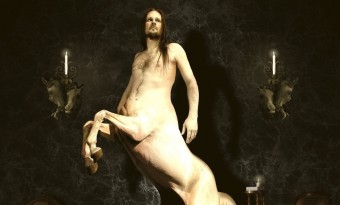 Venetian Snares' latest album may not be particularly innovative (at least by his own fairly deranged standards) but it's still a damn good musical mud pie...
Read More