I’m at the Green Door Store. It’s a dingy, wonderful venue underneath Brighton station, and it’s so close to my house I like to pretend it’s my cellar. I’m here to see a band I know a bit too well to review objectively, AKDK (aka Ed & G). This is the second night of their album launch, this time back in their home town. You probably can’t trust anything I say in this review, partly because I fancy both of the guys in the band. Of course, I only really started fancying them once I heard them play.

And I promise you this. If you go see them, you’ll start fancying them too.

I’m ahead of myself though. The only reason I’m ignoring my ‘strict’ rules against critical nepotism, is because I have quite strong opinions about the support act. To be precise, I have two entirely opposite opinions at once. That strikes me as a good excuse to write. So here I am.

The peeling, half-painted brick of the back wall is washed in bubbly lava lamp visuals, and the three incredibly young boys on stage appear to be hearkening back to a time before they were born. Possibly two different times.
Dressed in faintly sixties outfits and the odd mask, Hypnotized are solidly lodged in a kind of early nineties madchester shoegaze motif. I kind of wonder if they’re going for Kula Shaker’s dodgy as hell appropriation of George Harrison’s dodgy as hell appropriation of Indian aesthetics. It’s not entirely clear. There’s a lot of moany vocals, and a lot of droning synthesisers. I come pretty close to walking out.

But that lot of droning synthesisers? It slowly becomes clear they’re actually doing something interesting. The wall of electric throbbing is circling around itself in a pretty beguiling way. All three of the band have a small rack of synths in front of them and are gazing at them more than their feet, plus they’re actually doing something more interesting with them than I expected. Through the set, their rhythms become more aggressive, their arpeggiators more abstracted, and their whole sound becomes more coherently interesting. After a while I realise I’m dancing. I can’t help but pulse along with their genuinely hypnotic noisemaking. The drum machines repeatedly surprise, and they are tighter than they have any right to be.

If only they would stop moaning over the top of it, I reckon they could be alright. I almost admire the kind of person that has the bravery to decide that they’re happy to stand up in front of a crowd of strangers and sing terribly at them. It’s just that whiny, sub-psychedelic, baggy, echo chamber moaning. There’s no better word for it. It’s not even like it’s just one egotist who doesn’t notice. Two of them take on the ‘vocals’ at different points (those scare quotes probably aren’t really justified. They definitely did use their vocal chords to generate those noises. But by god I wish they hadn’t).

Perhaps this is just another of my personal biases. I reckon 80% of vocals in live music performance are unnecessary. People still think a band needs to have a vocalist to be appreciated, so they marr themselves with repugnantly bland moaning to try and fill some percieved gap.

Bands. Stop it. Only sing if you’re (a) good at singing or (b) have something genuinely worth saying, that can only be expressed in this manner. And beware, it’s very, very easy to get caught up in the idea that one of those is true when it isn’t. Be. Careful. No amount of reverb can fix you.

Anyway. I don’t want to stop talking about them on a hateful moan (although they ended their set on a hateful moan, so I’d only be closing the circle). They made some incredible noises on that stage, and I would have loved to have had a bit more of it blasted at me in the right circumstances. But let’s be honest, I was here for the main event and Hypnotized were just standing in my way.

AK/DK’s set up is fairly straightforward. Two guys. Two drum kits. Two racks of synthesisers. Possibly apocryphally, they got together because they had such a rant at each other about how much they loved drums and synths, and they wished there were more bands that focussed on just that. Someone overheard them, booked them a venue, and told them they had to prove it. About five years later, they’re still proving it.

There are three things you need to look out for at an AK/DK gig. The first thing is the first time the drums kick in. They have the tendency to start most sets with a fairly small synth loop, and a bit of noodling over the top. The synths synch up, and they play around a little, slowly building a little bit of noise into something with a rhythm. Then a drum kicks in, one of them taking over the rhythm whilst the other adds more layers.

The second thing to look out for is when they decide to swap duties. You should look out for it, because if you don’t watch, you won’t notice. They are tighter than you imagine (side note: they weren’t always this tight. They used to just jam in pubs and make a racket, and the magic was in that weird gap between when things were working and when things weren’t, watching brows furrow as synths fell out of synch, drifted apart, and then the relief as they brought it all back under control). It’s possible for a drum part to be passed from one to the other, so they can take it in turns to add layers of electronic fuzz, melody or whatever.

The third thing to look out for is the moment when they both crash onto the drums. Again, this could just be me, but I love nothing more than when two drummers slam into a rhythm together. If it’s tight, it’s just one of the rawest, most nervejanglingly wonderful things you can feel. AK/DK nail this. They know just how powerful a feeling it is, so every song, every jam, every moment of each gig, appears to building up to the next time they can do it. Through the course of this too-short set they build, relax, tease and push everything along from one crashing drop to the next. The centrepiece of this gig is ‘a journey into home synthesis’ where the elaborate machine at the back of the stage, which has been flashing in circles throughout the show is given the floor.

The fourth thing to look out for (did I say there were three things? I probably lied) is the jam. I remember when they used to say they would never record anything, never prepare, just jam together and see what happened. It still feels like the core of what they do. A home-made synthesiser (I checked with Ed afterwards, it is genuinely home made, a circular step sequencer, a couple of oscillators and a few LFOs, all bursting with leads, ready to route one noise into the next) glitters with light as it sets a semi-randomised pace for the jam. Layers of sound, a few nods and winks, and a bit of dodgy (but granulized to fuck) repetitive vocal stylings (I’ve never been able to hear a word they say, since they did that song about the catfish five years ago). It all builds, it all forms a shape and then they pour themselves over the drums. G bounces across his like a jazz soloist, while Ed just pounds out deft, perfect rhythms. It’s incredible.

They end (again, too soon) with a blistering rendition of their last single ‘Battersea’, which sounds like androids rioting on a merry-go-round. The bounce is infectious, the music spins and whirls. G crawls out into the crowd and Ed climbs up on top of his drums.

There’s a fifth thing to look out for. It happens just before the third thing, once they’ve both got themselves back in roughly the right position on stage, but only after G has done some comedically sharp drum fills to build tension. It’s the smile. Just before they slam into their unison of drum pounding, they make eye contact, and smile at each other. Right before the hammering climax of the night, you see that this is still just a pair of friends who love drums and synthesisers, doing exactly what they should be.

The drums, they get hit. The song ends. And they take their bows as a wall of echoing synths carries on bursting around them. It’s gorgeous. It’s sweaty. It’s the best dance in town.

You probably shouldn’t believe me. I’m all kinds of biased. But it doesn’t mean I’m not right. 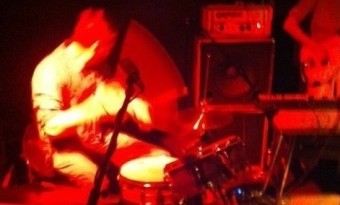 Our intrepid reviewer may suffer from beard envy as soon as he sets foot into 'Trendy Dalston', but Archie Bronson Outfit's stomping racket soon puts him at ease...
Read More