If the past couple of years have been creatively influenced by anything, it has been nostalgia. Take adidas’ ‘Original is Never Finished’ campaign, or the innumerable movie remakes that have been released. We are forever recycling the past.

Com Truise’s Iteration album is a magnificent example of that. He quotes one of Brian Eno’s Oblique Strategies in his press release: “Repetition is a form of change”. Indeed, ‘iteration’ means repeating a process until you create something new, and that’s exactly what Seth Haley has successfully accomplished.

Loyal to his retro futuristic mid-fi synthy sound, the spoonerism instigator is releasing his first full-length after six years. Galactic Melt earned Com Truise a very loyal following back in 2011, especially on the Internet. Although the two works aren’t too different from one another, Iteration feels much more vivid and catchy, like the soundtrack for a cult sci-fi movie.

Its opening song ‘…Of Your Fake Dimension’ is the introduction to this story: very accessible and uplifting, inviting you to stay. ‘Ephemeron’ is the beginning of the ride, with its robotic sequences and neon-streaked melodies. At ‘Dryswch’ we start to suspect there’s a romantic plot line, maybe between an alien and a robot; who is properly presented at ‘Isostasy’. The vaporwave tune combines galaxy voices and elegant, technicolour synths.

‘Memory’ brings some pop energy to the mix, the most danceable track on the album. The evocative ‘Propagation’ determines the break-up of this cybernetic love story, which leads us to the heavy synths and downtempo of ‘Vacuume’ and ‘Ternary’. The climax of this narrative comes at the emotional ‘Syrthio’, followed by ‘When Will You Find The Limit…’, where robotic vocals announce the comeback of this relationship.

Finally, the album ends with ‘Iteration’, an indisputable hit. A beautiful story, compellingly told. Now we can’t wait to watch the movie! 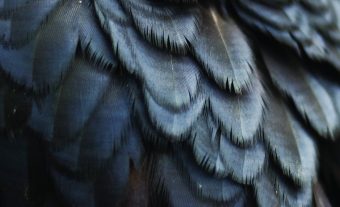 On their debut album Bird, London four piece Ex People want to scoop the listener up and take them on a journey to the gloriously jagged peaks of glacial riff-mountains.
Read More