It’s been eight years since ‘I Bet You Look Good On The Dancefloor’ made Arctic Monkeys the biggest band in the country. In full blown Stone Roses style they went from scruffy looking fourpiece to headline act, attracting the sort of attention that would see most bands crumble. What the Sheffield group did instead was look to expand their sound, from their widely agreeable second effort Favourite Worst Nightmare, the generally boring Humbug, and the more ballsy and definite step up Suck It And See. Having chalked up collaborations with Richard Hawley, Josh Homme and Dizzee Rascal along the way, we finally reach AM. It’s their steaming, tight-trousered, sexed-up rock’n’roll album. Well, that’s the idea – so how does it fare?

Opening tracks ‘Do I Wanna Know?’ and ‘R U Mine?’ are already long-standing tracks on the Monitors jukebox. “Do you want me crawling back to you?” Alex purrs on the former. If the previous two albums were slightly failed experiments with LSD, this is where he puts away the tabs and gets out the Northern charm. Hanging out with supermodels in New York and picking up some hip movement lessons from Homme has obviously rubbed off (ew). To say there’s sexual imagery in AM is to really, really underplay the theme; key track ‘Arabella’ (any chance this is about real life love interest Arielle Vandenberg, Al?) features the line “she’s got a 70s head but she’s a modern lover”. If listening to Alex Turner wordily explain his sexual kinks sounds offputting, you might struggle a little bit here (luckily, because of the tabloid culture we all live in, the likelihood is you’re a massive perv and had to take a five minute break in the middle of this paragraph to do a Google image search for ‘Arielle Vandenberg’). It’s actually quite refreshing to hear pop music that describes sex without bragging or sounding exploitative. If I had to get drunk and disappointed with the Monkeys or leery with the likes of Pitbull, I’d pick these guys anytime.

While the frontman has always been the focal point of the group, there’s plenty to dig into musically here. In the main their recently adopted R&B influences work pretty well, and they do a proper 60s desert number with ‘Fireside’. Not many tracks hit the four minute mark; attempting left field credibility they’re not, and to be honest I couldn’t be happier with that. A good old-fashioned pop band is what they were always meant to be, and with AM they’ve started hitting some nails on the head, not least on ‘Why’d You Only Call Me When You’re High?’ – the mid-paced, bump and grind effort that just doesn’t seem to get tired. There’s more harmonies on AM than in Sister Act 2, and they’re designed to make you sweat like a nun in a… wait, I’ll stop that there.

There are times when the louche pace doesn’t quite engage. Most of ‘One For The Road’ passes by without much to say (apart from the great line “there’s no need to show me around baby I feel like I’ve been here before”), while ‘I Want It All’ seems to be a Queens of the Stone Age-esque riff without any meat to really make it tasty (it is a decent riff though). The slower numbers halfway through also don’t quite work for me, maybe because I’m not a ‘lighters in the air’ guy. ‘I Wanna Be Yours’ works as a smoky closer, but I can’t tell if just using John Cooper Clarke lyrics instead of at least trying to copy them seems like a bit of a cop out (even with his clearance), especially after four records of Turner trying to reach that level of lyrical excellence. Then again, anything which makes JCC more widely known can only be a good thing (even if it does inflate his show ticket prices, for fuck’s sake Guardian readers).

‘Arabella’ is the highlight track, combining the reference points trailing throughout the record, and seeing the group at their peak enjoyment level, featuring a ridiculous Led Zep aping guitar line, loads more harmonies and a pretty ballsy guitar solo.

AM‘s detractors will write it off as an uninteresting, rock by numbers record. The sound of a man from Sheffield travelling to LA / right up his own arse. People like myself will say it’s a pretty good way to combine four albums of development, while being able to shred your ideas down to make an album of pretty ace pop songs.

I’d go so far as to say AM is the best Arctic Monkeys record to date. Solid songs, a la ‘Whatever People Say I Am…’, mixed with more interesting musical influences passed to them from the hip-hop community and the desert rockers. It may be about the excesses of being in a global band, but fourteen-year-olds in Doncaster will still be able to relate to it in parts. Most of all, at its peak are some of the most honestly fun tracks of the year. And in a world where London Grammar is considered an exciting listening, it’s less ‘Who The F*** Are The Arctic Monkeys’ nowadays, and more like thank fuck. 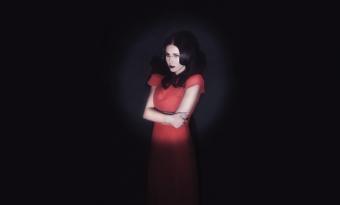 She's supported Sunn O))) and covered Burzum, but Chelsea Wolfe's new album is her most accessible and darkly blissful to date...
Read More