For an international mystery man (see his recent Who, What & Why? mockumentary), The Last Skeptik seems to be bloody everywhere at the moment. We go to see a stand-up show by comedian Doc Brown – there’s The Last Skeptik riffing with him on stage. We got to a Livin’ Proof night, or a FEMME launch party, or pretty much any decent beat-based night in East London, and there he is behind the decks. Then we compile our favourite albums of the year so far and, lo, he pops up there as well, like Zebedee in a snapback. However, of late the most likely place for him to turn up seems to be Youtube. He’s been knocking out videos for all the tracks on his aforementioned Thanks For Trying album, and this one, directed by Sonny Malhotra, may be the best yet.

An unpainted city scene is populated with tiny figurines, bringing to mind the street art of Slinkachu only completely drained of colour – a bit like a Subbuteo set designed by Rachel Whiteread. The colourless facade is then gloriously drenched in waves of marbled paint that slowly splooges over the scene like a psychedelic volcano has just erupted nearby, leaving the figures submerged in vivid colour. It’s a stunning scene, and the huge kick drums, gorgeous space-jazz samples and roving flutes of the track provide a suitably sultry accompaniment. Lush. 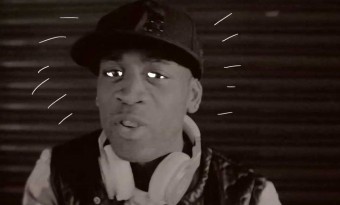 Wiley's back where we wants to be - far from the muddy fields of Glastonbury and back belting out frantic rainbow grime.
Read More