When asked to think about the Spanish city of Valencia, what colour springs to mind? Chances are it’s orange, right? Perhaps because of those delicious oranges (even though they were actually hybridized in California), or maybe because that’s the colour you get if you mix together the two hues that predominantly make up the regional flag, red and yellow, as incorporated in possibly the best football crest in the world (admittedly there is also some blue in there so the actual result would probably be some sort of turf brown, but that’s not the point):

Anyway, try telling that to upcoming Valencia band Jupiter Lion. Not only have they filtered out every bit of orange from their video, they’ve junked all the other colours too. And good on them, because their new video is a monochrome delight. Following the three members of the band from behind as they head from separate locations to a gig, you become aware from the distracted stares of passers-by that there is something a little wrong with their faces. We won’t give it away, apart from saying ‘if you tolerate this, then the Spanish will be next’.

The music, a thunderingly motorik space-stomp, is bloody great too – when the band finally reach the venue in the video the whole thing goes off like a (Kraut)rocket. Aside: if Krautrock had been invented in Spain, would they have called it Dagorock? Food for thought. Either way, we can’t wait for Jupiter Lion to play over here so we can ask them… 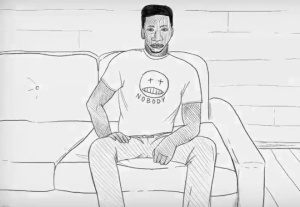 The uniquely twisted songwriter presents a fantastic animated short about everything and nothing...
Read More