This video was actually released a couple of months ago, but the way it appeared (and the quality of the video itself) means it’s still worth featuring.

The idea for the video, a surreal slice of CCCP Chic, came when Australian electro-pop band Midnight Juggernauts watched a few Tarkovsky films and decided they “liked the idea of being an anonymous Soviet art-pop band from decades ago” while on tour in Russia. Dressing up in military gear, they made the video look sufficiently dated and added a load of cyrillic text for authenticity (sadly we have no idea how it translates).

Then they got some Russian friends to start circulating the video on Russian blogs and message boards, in order to see how people responded to this bizarre, apparently real, rediscovered obscurity. Responses ranged from people saying it was a “comment using religious iconography within a communist context”, while others simply said they danced “like drunk morons”. Most Russians, it must be said, saw through the disguise and deduced it was actually a foreign band on tour.

The video itself is a perfect accompaniment to a compulsively catchy track (think a blissed out WhoMadeWho, or fellow Australians PVT’s latest album). What they saved on locations – most of it’s filmed in an empty warehouse – they clearly spent on props, as the video sees the uniformed Juggernauts playfully decapitating big cats, sharing baths, sitting in electric chairs, playing gigantic Swiss horns, and generally exhibiting some excellent Dad dancing. The fluid pace fits the tempo of the track perfectly, and the whole thing recalls that old footage of British soldiers being fed LSD in 1964. Lovely stuff. 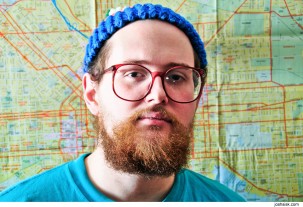 You know those 'hologrammatic' stickers you used to get as a kid, where you could make the picture change very slightly by moving it from side to side? Dan Deacon's new video is basically like a series of those, set to his own idiosyncratic take on the music of Congolese kalimba-plucking noiseniks Konono N°1. Features an appearance from old favourite the Glowing Green Skull at the end...
Read More