Jon Hopkins had the dubious honour of being dubbed ‘the next Brian Eno’ by The Guardian this week. Not dubious because it was an unflattering comparison, obviously, but because it guaranteed a raft of outraged musos spluttering below the line about how there would NEVER be another Brian Eno and how DARE the paper even suggest it – the man is still alive for goodness sake!

Putting to one side that it’s highly unlikely journalist Jude Rogers wrote the headline in question, the reason Brian Eno comes up at all in reference to Jon Hopkins is because they’ve actually been working with each other for almost a decade. After hearing Hopkins’ second album ‘Contact Note’ in 2004, he invited the young musician to play on his ‘Another Day on Earth’ album, kicking off a long-running collaborative relationship.

Indeed, after becoming disillusioned with his own work being overlooked, Hopkins ended up finding a great deal of success working with others. Through Eno he ended up becoming involved on Coldplay’s last two albums, while his records with Fence Collective mainstay King Creosote earned the pair a Mercury Prize nomination in 2011. A film score for cult Brit sci-fi flick ‘Monsters’ also saw him up for an Ivor Novello award (Hopkins’ Twitter bio sardonically reads “Ivor Novello Award and Mercury Prize losing artist”).

Yet for all his success as a composer, you sense that his personal work is what he really craves to be recognised for. While his last effort, 2009’s ‘Insides’, was warmly received by many, it didn’t really raise his profile as a solo artist. ‘Immunity’, however, is already doing just that. We may only be in June, but this is an album that is certain to wriggle onto umpteen ‘best of 2013’ lists by the end of the year.

Classically trained yet obsessed with synths and electronics from a young age, ‘Immunity’ combines his two obsessions with a clinical yet charming dexterity, like an amiable surgeon cheerfully humming to himself as he removes a particularly hermetical brain tumour. Hopkins records anything from dripping taps to reversing lorries for his tracks, but his musique concrète tendencies are always used to serve rather than distract. While some of the harder and more complex beats might put off fans of his more pedestrian earlier work, most will be left with their jaws swinging in the breeze at the sheer progression of it.

The first two tracks are particularly stunning. ‘We Disappear’ starts with a bunch of keys rattling in the door to his studio, which opens onto a feast of warm pulses and sharp glitches, descending into a languorous fade-out that’s like letting sugar-coated snowflakes melt on your lolling tongue. Then there’s the incredible ‘Open Eye Signal’, which revolves around an insectoid buzz of a bassline, swooping between tones like a smashed bee (apparently Hopkins spent a full six weeks on the bass alone – and it shows).

The latter is reminiscent of James Holden’s stunning ‘Lump’, and Hopkins employs a similarly exacting attitude, mixing magnificent, mutating music into scattershot electronics with such attention to detail that every bar sounds different. It’s miles away from the pre-set, drag ‘n’ drop laziness of many electronic musicians, yet also has a distinctly emotional feel that’s similarly distinct from the alien environments of Amon Tobin and the like.

As a case in point, ‘Breathe This Air’ employs an Apparat-esque mix of symphonic sounds and electronic beats. It’s lovely, but in a way that would be a little bland if it wasn’t for the shattered garage beat underneath – a bit like Gwyneth Paltrow on a bed of nails. ‘Collider’ is well-placed to follow it, a punishing beast that actually sounds like it’s being blasted through the Large Hadron Collider itself. It’s a huge but bracingly airy sound, with a slight drag to the beat providing the sensation of intense g-force being applied to your eardrums.

The second half of the album struggles a little to bear the weight of the opening half’s brilliance. The intimately cinematic ‘Abandon Window’ is wonderfully recorded but a little dull, while ‘Form by Firelight’, in what is, to be honest, probably a hugely misleading comparison, but the one that immediately sprang to mind, sounds like an Autechre remix of Kanye West’s interminable ‘Runaway’.

Hopkins has spoken about ‘Immunity’ following the arc of a festival experience, and ‘Sun Harmonics’ feels like that moment when dawn breaks to reveal a thousand blinking ravers, staring around glassy-eyed with the echoes of a gurn still rippling across their faces in pure, wrecked wonderment. Unfortunately, it also sounds like a Gold Panda track with most of the more colourful elements removed, which is unfortunate as, at a dozen minutes, it’s the longest track on the album. In fact, the cavernous ambient coda is more interesting than what precedes it.

Still, much like a festival veteran emptying their baggies into a final wrap for the road, ‘Immunity’ ends on a high. The closing title track is a wonderfully muted piano piece with a rhythm created out of, well, god knows what – considering Hopkins’ habits probably a freezer defrosting, a game of Kerplunk being put away and the creaking of his own knees. Another incredibly gradual ending only serves to emphasise that this is a record he refused to rush.

To promote it, Hopkins collaborated with biochemist-cum-photographer Linden Gledhill to produce a video matching tracks from ‘Immunity’ to microscopic images of food dye crystallizing (see below). Also like his music, it was created using the wonders of modern technology, and could easily be mistaken as being wholly artificial. Like his music, it takes what seem like mundane natural processes and presents them in a way that’s often breathtaking. He may not be the next Brian Eno, but who cares? It’s Jon Hopkins’ name that’s on everyone’s lips right now… 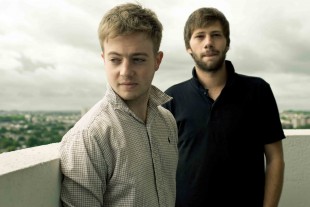 'Strike while the iron is hot' is the usual advice given when you hit sudden success. In contrast, following the acclaim over their debut album 'Crooks and Lovers', Mount Kimbie not only let the iron cool off for a bit but practically encased it in ice and sent it off to an Antarctic research station. Aside from a flurry of EPs dished out just after that album's release in 2010, we've heard precious little from Dom Maker and Kai Campos since. Unless you happened to catch them live, that is. The duo spent so long touring that writing music was forced to take the back seat - in fact it wasn't even in the vehicle but sitting at home twiddling its thumbs and gazing expectantly out the window. As Campos told Pitchfork, it was a disconcerting experience: "This was the longest I've gone without making new music since I was 15 - making music became my job, and then I had no time to do it". Fortunately any eagerness to get something out ASAP when back at home was tempered with a desire to produce a worthy follow-up. And 'Cold Spring Fault Less Youth' is not only worthy, it actually surpasses 'Crooks and Lovers' in almost every way. Their debut was a spacious record which allowed for intriguing subtlety at its best, but in weaker moments erred towards the occasional drifting tedium of their mate James Blake at his least engaging. This record is spacious in a different way, in that it actually feels like space: huge, expanding and full of exciting new elements, with enough distance in between to render them captivatingly distinct. The most obvious difference is the increased presence of vocal melodies. Opener 'Home Recording' utilises some gorgeous saxophone and keyboards against a sleepily sun-drenched backdrop that swaggers just slightly off the beat every second bar, and Campos' vocals fit much more naturally into Mount Kimbie's music than the slightly more awkward shift into singing exhibited by, say, PVT or Bibio. The most distinctive vocal tracks come from the much-hyped King Krule. For a sometimes lackadaisical performer, his take on 'You Took Your Time' is surprisingly aggressive, an attitude apparently achieved by having him rap alongside live drums which were later removed. The lyrics are also unnervingly violent at times, with the opening lines particularly unsettling in the context of last week's brutally bloody attack in Woolwich: "Now did you see me / I killed a man / They all stayed down / But he chose to stand / Girl, did it hit you deep? / To watch his mind seep / Across the pavement / Deep down slabs of meat". Grim. The visceral tones are emphasised even further by being delivered over a gently undulating backing track. You might think the laid-back, jazzy keys would better suit a vocalist along the lines of Cody ChesnuTT or Ursula Rucker, but King Krule makes the track his own by placing a distinct emphasis on certain vowels, elongating them in a way that almost adds a touch of Southern slack-jawed hillbilly to his South London drawl. His other appearance (on 'Meter, Pale, Tone') is even better, with the vocals kept slightly lower in the mix. Perhaps this is because the music is so demanding of attention, with the bass in particular played with a smoothly confident verve similar to Olugbenga Adelekan's work on the last Metronomy album, while the whole shebang is intermittently spattered with rhythmic raindrop arpeggios. It's possibly the best track on the album. In truth, and this is the reason 'Cold Spring...' generally outperforms 'Crooks and Lovers', there isn't a single track here you'd want to skip. The closest it comes to losing your attention is during the fairly benign slog of the first half of 'Blood and Foam', but that ends up being gorgeously energised by some woozily funky chords that appear halfway through, like George Clinton suddenly turning up at a sixth form common room party with a bottle of Space Punch. 'Slow' is the other track which doesn't quite fire on all cylinders, thanks to a beat that's just a little too loud and simple in comparison to the rest of the album (a bit like a bunch of sixth-formers who can't handle their booze gatecrashing George Clinton's 4th of July barbecue). Peaks are easier to find. 'Made to Stray' is a pounding kick drum away from destroying dancefloors, with a percussive rhythm that sounds like a bus driver rapping his fingers against the wheel while stuck in a particularly groovy traffic jam, while synths wriggle in and out the picture like time-lapse footage of a wormery. 'So Many Times, So Many Ways' is a lilting waltz that orbits some more slick bass playing, 'Sullen Ground' is slippery, ghostly and calmly bewitching, and the closing 'Fall Out' features a dubstep beat in the most literal sense, in that it actually sounds like the bastard offspring of two-step and dub reggae. As poly-rhythmic piano and synths ripple over the top, it's a colourful end to an album that expands Mount Kimbie's palette considerably. Post-dubstep always seemed like a slightly disposable term, saved only by the fact that the music being made by Mount Kimbie and their peers often wasn't disposable in the slightest. Yet the music Maker and Campos are now making is so much deeper, fuller and richer (perhaps the result of it being professionally mixed this time around) that the genre they helped define is no longer a satisfying description of their sound. And no one wants to coin the phrase 'post-post-dubstep'. As Campos ruminated, "Most of the music that sounds like it's been influenced by [Crooks & Lovers] that has come out since sounds fairly dull, and it's not something we want to carry on doing. We want to get away from it". Not only have they managed to get away from it, they've wound up somewhere far more interesting. And who wants to spend their time striking hot irons anyway?
Read More