Adam Pierce has been producing music as Mice Parade (it’s an anagram, geddit?) for fifteen years now, during which time he’s assembled several supremely talented collections of musicians to take his albums out on the road. When recording (he has a studio in his home that has hosted Animal Collective and Frightened Rabbit among others) it’s a similar affair; whoever he drags in, even when they’re not as well known as Stereolab’s Laetitia Sadier or Kristin Valtysdóttir of múm, invariably proves themselves to be pretty damn good.

Perhaps it’s the fact he’s a blinding musician himself that makes others so keen to work with him. An incredible percussionist, he tends to take at least one more on tour with him to fill in while he demonstrates his similarly enviable skills on guitar, or so they can face off against each other on separate kits during rhythmic pissing contests as complicated as they are noisy. Advice: if you appreciate witnessing human beings perform physical and cerebral activities extraordinarily well, catch these guys on tour.

“Candela” is the seventh studio Mice Parade album, and a marked improvement on 2010’s messy “What It Means to Be Left-Handed”, which attempted to do with West African music what 2004’s “Obrigado Saudade” managed much better with Brazilian idioms. In this case flamenco music is the soil from which Pierce’s fertile creativity grows, with the record taking its name from a lively late-night bar in Madrid that the city’s finest gypsy musicians tend to gravitate towards in the small hours.

Pierce fits a host of latin themes into Mice Parade’s distinctive sound, and for the most part it’s pretty seamless. Opening track ‘Listen Hear Glide Dear’, for instance, feels like a post-rock version of the intro to ‘El Condor Pasa’ by Los Incas (you know, the one DJ Shadow sampled). The layers of droning feedback and mournful tones provide a beautifully moody start to the album, while the rumbling rhythm is provided by what sounds like a mountain troll slowly descending down a rocky pass.

‘Currents’ sees the return of Carolina Lufkin on vocals, beginning with a sweetly distorted lullaby and developing into a churning mixture of manic guitar lines and the usual intricate drumbeats, although the percussion patterns that follow on ‘This River Has a Tide’ are surprisingly simple, at least until a sudden flamenco section shows up.

It’s that sort of restless musicality that makes Mice Parade such a refreshing tonic to the boring effects-pedal wankery that passes for most post-rock these days, although it’s rarely overwhelming here. ‘The Chill House’ begins with a whining drone and arpeggio combination, with Pierce adding a couple of poly-rhythms before eventually tying everything together with a simple vocal melody and synth line. It’s less cluttered than his work can be, which alows you to enjoy each individual facet as they’re introduced, draped over the song like so many layers of muslin.

The title track then defies convention by probably being the best on the album. A bittersweet song about missed connections in Spain, held together with a solid woodblock pulse, the chord progression is so catchily inventive you could imagine it being adapted by Metronomy, at least until the point where it flames out with a burst of female flamenco wailing.

It’s a short track, and unusually for Mice Parade there are no particularly long excursions on “Candela”. Also unusual, for a band led by a percussionist who used to expressly avoid sampling and other electronic jiggerypokery, is the appearance of a drum machine on ‘Look See Dream Me’, which plays a humble counterpart to the glistening Dustin Wong-style guitar ripples flying overhead – even if it does kind of make it sound like the soundtrack to an old Sega game (not that that’s necessarily a bad thing).

After ‘Gente Interesante’, a gorgeous track that’s possibly the most soulful thing they’ve ever done, the quality drops off severely for the last two tracks. ‘Contessa’ combines annoyingly chirpy jazz guitar licks with an intentionally sloppy rhythm section (why?) to create something Jack Johnson might come up with after a night binging on Hawaiian fungus, while ‘Warm Hand in Narnia’ is, contrastingly, a bit too boringly solid, like a Mice Parade take on U2.

However, this doesn’t detract from a largely joyful record, one that reminds you what a treasure Mice Parade are. Still, while some of the more accessible moments here (and it is probably their most accessible album so far) suggest a late bid for mainstream acclaim, reviews like this one from AbsolutePunk.net (bit of a misnomer that), which claim the main issue with the album is that “it’s just too bloody weird”, suggest it’s probably wishful thinking.

It’s true that Pierce’s talent is of the intelligent, inquisitive sort that tends to lead his creativity down unexpected avenues, but “Candela” takes a pretty conventional journey by his standards. Nonetheless, it remains a record that will reward those who not only stay the distance, but are happy to travel slowly, and take in the scenery.

Laura Mvula - Sing to the Moon 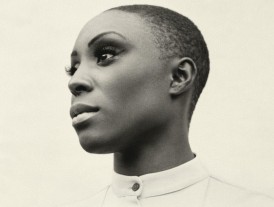 As far as I can remember, supply teachers were always pretty easy targets. They'd come in, take the register, then cower in the corner before the paint (art), sulphuric acid (chemistry) or hacksaws (D&T) started flying. I remember one guy placated the class by letting us watch a video rather than follow the lesson plan. The fact the video in question was a pirate copy of 'A Clockwork Orange', still banned at that point, didn't seem to bother him. Shortly after the (first) rape scene, someone turned to him and asked: “What do you think, Sir?” “Well, it's not quite Jean-Claude Van Damme, is it,” was his response. Laura Mvula used to be a supply teacher, but while some of her colleagues may have been busy showing ultra-violent films to classroom's full of fifteen-year-olds, she used any spare time she had to work on songs on her laptop. However, while she'd previously been trained to compose for an orchestra, the sonic limitations of Garageband meant she tended to restrict herself to celeste, harp and timpani, as those were the least synthetic-sounding instruments in the sound bank. That's why those same instruments frequently dominate her début album, "Sing to the Moon", which also allowed her access to a full orchestra and the talents of Rumer producer Steve Brown (who you may also remember as Alan Partridge's bandleader/nemesis Glenn Ponder from 'Knowing Me Knowing You'). Yet despite the new found sonic freedom, she uses the tools at her disposable sparingly. Opening track 'Like the Morning Dew', for instance, sees her voice given a huge amount of space which she uses to harmonise with herself, while 'She' goes for a good two minutes before the beat kicks in. When it finally does, it instigates some simple but effective polyrythms that give the track a necessarily propulsive kick. The highlight, however, is undoubtedly 'Green Garden'. Kicking off with singing, handclaps and a joyously catchy celeste ostinato, it blooms into an Amy Winehouse-style soul stormer. “To me,” she insists, “this is still a bit of a bedroom track”. Well, she must have one hell of a bedroom. It's an unbelievably good single, although it's a shame that it turns out to be something of an anomaly, ”Sing to the Moon” being largely dominated by slow, measured, cautiously exploratory songs of varying quality. 'Make Me Lovely' is one of the better ones. Having been schooled in the challenging arena of modern classical music, Mvula has spoken about the guilt of wanting to compose songs using conventional harmony, feeling “incongruous, as though I shouldn’t be in a context where there was an orchestra”. Happily, here she marries her predisposition towards prettier music with techniques way beyond the capability or ambition of your typical pop songwriter. The rhythm follows the unregimented syntax of her vocals, not dissimilar to Van Dyke Parks' arrangements for Joanna Newsom on “Ys”, while odd little touches of discord stop the fuller-sounding choruses from getting schmaltzy. At times it almost feels like Scott Walker after being put through one of those 'so-and-so transposed into a major key' Youtube videos. However, while other songs like 'Can't Live With the World' threaten to justify the likening of Mvula to a softer, sweeter (albeit more insipid) Nina Simone, others just descend into mush. The lyrics of 'Father, Father' - “Father, please don't let me go” - sound like they should provide a real emotional punch but, unless I'm dead inside (a very real possibility to be fair), just sounds lifeless. Ultimately you worry it'll end up being mewled by some berk on X-Factor before long. Similarly, the lashings of harp on 'I Don't Know What the Weather Will Be' end up making it sound like the Disney themes Mvula adored as a child, perhaps trying to erase the memory of the first time she heard her own voice singing 'A Whole New World' from 'Aladdin' (“it was so bad. I cried so much”). Elsewhere, closing track 'Diamonds' provides a truly mawkish finish and should have been replaced with the far superior 'Jump Right In', a bonus track on the 'deluxe' edition which makes restrained use of muted horns, lightly dashed cymbals, brushed snares, delicate strings and a beautiful, dreamlike chorus. Still, there are enough moments in between, such as the triumphant, 7/4 intro to 'Flying Without You', which almost sounds like a brass-led snatch of Philip Glass or Moondog, to keep your ears engaged. It cements the image of Laura Mvula as a composer of smart, symphonic pop that's a lot more interesting than it first appears. Yeah, some of it's boring, but even the boring bits are a billion times better than Emeli bollocking Sandé. And for that we should be grateful.
Read More