Every now and then NME choose a punk band to endorse that they reckon is reasonably digestible for their sheltered readership (Gallows, Fucked Up, you know the ones). Right now FIDLAR are that band – but don’t hold that against them.

The young L.A. four-piece have received a similar endorsement from the normally punk-wary Pitchfork too, with the caveat that they’re not doing anything particularly original. Which is fair. They’re not. But when you’re writing raucous, lairy tracks about getting wasted, the important thing is to do it with conviction, and despite the fact that they appear to be permanently stoned, conviction is something FIDLAR have in abundance.

This is extremely important. I was in a very short-lived punk band once. Our first (and last) gig was at a small festival in Surrey, and by the time we went on most of the band had heavily indulged in various pharmaceuticals which had rendered us barely able to play, apart from the bassist (he just didn’t turn up). We were, predictably, awful, although we did achieve the punk goal of causing a hippy to run into the woods while plaintively sobbing “why are they so angry?”. Still, the experience left me with some idea of just how hard it is to stay tight as a band when chemicals have caused your brain to begin oozing out of your own nose – and FIDLAR are certainly tight.

They have the pefigree after all. Greg Kuehn of notorious Long Beach punk band T.S.O.L. sired half of the band’s members (Elvis and Max), who were opening for bands like Circle Jerks when they’d barely reached pubescence. Meanwhile, Zac Carper was just about holding down a job in Elliott Smith producer Rob Schnapf’s studio (where he frequently snuck in to sleep) and Brandon Schwartzel was messing around with a hip-hop project formed primarily as a means of obtaining free booze (although he did narrowly miss out on a 2 Live Crew support slot).

They finally formed FIDLAR around a shared love of hedonism (the name stands for a friend’s skating motto, “Fuck It Dog, Life’s A Risk”) and a shared suspicion of bands that just did whatever was currently considered cool, which at that time was political posturing. As Schwartzel put it: “you’re fucking 16 and live with your parents in a nice suburb of Los Angeles. Like, what are you really pissed about?”

Instead, FIDLAR write about what they know, which is why their debut album, released this week, is awash with song titles like ‘Cheap Beer’, ‘Wake Bake Skate’ and ‘Cocaine’. There are two reasons why this doesn’t get as boring as it usually does when someone tries to impress you with how many drugs they take. 1) They do it with an irrepressible energy and 2) They show the darker, more pathetic side of it too – the moments of shivering loneliness, of being unable to pick yourself off the floor, of pulling over the car you’re drunk-driving so you can vomit your life away. What initially sounds like a meatheaded celebration is often a pretty honest assessment.

Perhaps the main reason for their crossover appeal is that, despite being raised on bands like The Descendents and eventually admitting their love for Blink 182 after denying it throughout pubescence, they actually sound more like Wavves or Ty Segall, sharing a love of catchy melodies and surfing with the former and, like Segall, a tendency to sharpen rather than smooth their edges. Their best songs betray a knack for awesome hooks too – ‘Wait For The Man’ is a shout-along stormer, ‘Blackout Stout’ is a surprisingly moody slice of surf-rock, and ‘Stoked and Broke’ is a boisterously anthemic, beer-spilling barnstormer, like Titus Andronicus with a sense of fun.

However, they’re not really bothered about their wider appeal. “Not everyone is meant to like this record,” is how Schwartzel has shrugged off criticism, insisting that the band “don’t give a fuck about what anyone else thinks, or what people want us to do, or what music is cool right now that people think we should be making”. Perhaps their wreckless, carefree attitude is simply a product of their environment. As Schwartzel has pointed out: “Every other city seems to hate on L.A., but everyone in L.A. is like, “whatever.” They don’t hate on anyone else”. So whether you like FIDLAR or not, there’s no point telling them. They don’t care about your opinion. They care about their music. And as long as that continues to come across in their records, so will we. 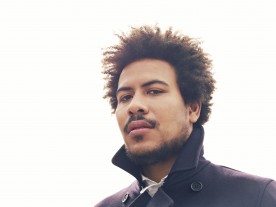 Although many people know Liam Bailey from his appearance on Chase and Status’ grime/dance crossover hit 'Blind Faith', his solo material has a more traditional quality. Using almost entirely live instrumentation, he creates songs that are reminiscent of the heyday of Detroit Soul. Unsurprising then that the person who first championed his sound was Amy Winehouse, who released his first single on her label and produced one of the tracks on his eagerly awaited debut album Out Of The Shadows. Comparisons with the retro compositions of Michael Kiwanuka are inevitable - and they are well founded. Both have classic crooning voices and their records have an unmistakable, timeless production quality. In November 2012 Liam put on a sold out show at the Union Chapel and bought the packed venue to a standing ovation, not once but twice. To end the show he performed a stripped back rendition of the aforementioned 'Blind Faith' featuring a Cello and his acoustic guitar, that could not have been more different from the thumping original… Our personal favourite track is 'Please Love Me'. Kicking off with a bass line that brings to mind The Coral’s classic 'Dreaming of You', it develops into something altogether more Motown, with horn led crescendos and lush instrumentation. His tenor vocals cut through to tell a classic love story; admittedly a story we’ve all heard before but why mess with the formula? One line seems particularly apt - "time is all we need" - and with time we predict that Liam Bailey will be the name on everybody’s lips. His album still has no official release date (frustratingly!) but if it's half as good as tracks like 'Please Love Me' and 'It’s Not The Same' it will be worth the wait. It seems that the album has already been recorded, but for one reason or another the record company has cold feet. Hopefully his recent successes might warm those toes a little.
Read More