Thursday night sees the 20th FIFA World Cup kick off in Brazil in what may well be a carnival of rioting and tear gas, as decades of barely hidden corruption finally collapses in on the sport’s governing body. Oh, and there’ll be some football.

Probably some quite good football in fairness, but if you’re not into watching goalkeepers being shot at with leather balls or protesters being shot at with rubber bullets, then there’ll be no better place in London to escape the madness than at Cafe Oto, Dalston’s premier experimental music venue (and also excellent locater of lost keys, as I found out after the Matmos gig they hosted recently). Tomorrow it’ll be hosting two bewitching acts who spin marvellous new creations out of traditional folk forms: New Bums and Tara Jane O’Neil.

Portland’s O’Neil, who released her latest album on the excellent Kranky Records earlier this year, will kick off proceedings with some marvellous, trance-like folk. The fact she’s played with such bands as Low, Sebadoh and Jackie-O Motherfucker over the years (and on a whole bunch of different instruments too) gives you an idea of how talented she is, but her solo work shines through even brighter than her collaborations.

Check out ‘Wordless in Woods’ below, for example. Accompanied by a pastorally dappled video by Makino Takashi (watch it at the highest resolution for full effect), her gentle guitar undulates exquisitely like water slowly lapping at the shore. Total bliss.

New Bums will then take over with some of what they’ve branded ‘Old Drunk Americana’ (is there any better kind?). Consisting of Ben Chasny from Six Organs of Admittance and Donovan Quinn from Skygreen Leopards, it seems them move away from the free/freak folk of their usual outputs into something more conventional – although no less captivating. Chasny calls Quinn “one of the best lyricists out there today” as an explanation for why he started working with him.

Considering Chasny himself is one of the best guitarists going (he also used to play in storming noise rock band Comets on Fire), that means you’re in for a treat when the pair combine their significant talents. Check out ‘The Killers and Me’ below for a taste.

Who needs Neymar when you’ve got this on your doorstep? 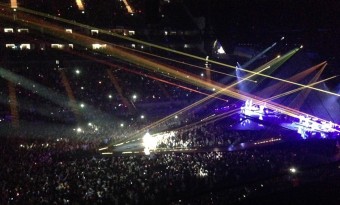 Katy Perry pulled out all the pop stops at soulless phone dome The O₂ last week, but while the costumes and pyrotechnics were spectacular, her feminist message was a little confused...
Read More