While 2014 already has a few too many scuffs on it to be termed box-fresh, and the unremitting sogginess has stifled most new year excitement, there’s still plenty of reasons to be optimistic about the music heading our way over the next 12 months. So, having celebrated the best albums, tracks, videos, gigs and artwork of last year (and slated the overrated), what better way to move on than by making 2014’s first Album of the Week something that came out in, um, 2013…

Still, it’s Nate Connelly’s fault for releasing his debut on December 23rd, after we’d already clocked off work to gorge on Baileys and brandy butter for a fortnight. Yet the bizarre decision to launch ‘A Dream About Being Lost’ in the cultural downtime of late December doesn’t mean it deserves to be overlooked; quite the opposite in fact.

Having largely concentrated on scoring short films (and one feature) since graduating from Leeds College Of Music in 2003, Connelly first came to our attention as a solo artist after we featured the disturbing (and appropriately cinematic) video for his ‘You Echo’ single. Yet it was the music that had us looking forward to the LP. While press release comparisons tend to be wildly misleading (“‘X’ sounds like Frank Black fronting The Velvet Underground!” – no it doesn’t, it sounds like Frank Sidebottom fronting the band from Velvet Goldmine, who’ve all contracted dysentery), the stated touching points of James Blake, Thom Yorke and Bonobo weren’t actually that far off the mark.

The maudlin tone and crisp, broken robot beat of opening track ‘Some Faith’ certainly explains (musically if not vocally) the Thom Yorke comparisons, although things are a lot sparser here than on any of his solo or Atoms for Peace efforts. A shadowy, subtly soulful female vocal bobs up and down over the top, culminating in an understated, modern take on trip-hop (admittedly a phrase that might have some people running for the hills).

‘You Echo’ comes next, and, stripped of the brutal video, the quality of the song (like the protagonist of said clip) is left bare. Thankfully, in this case that’s a good thing. The Blake influence is the prominent one here, with muted, echoing piano and tender vocal repetition gradually building up in intensity, but without ever threatening to wash anything overboard.

It may still be a little low-key for more impatient listeners though, who’re more likely to be won over by Ruby Pemberton’s vocals on ‘Tired Waiting’. Her harmonies with Connelly manage to be both despondent and sexy at the same time. Is it possible to be despondently sexy? This suggests it is, particularly when the creeping, reversed synths come into play. Delectable.

Beyond the smoothly sibilant title of ‘Similar to a Simulated Situation’, the album’s overall palate is expanded with some pulsing synth-work, sauntering rhythms, slick guitars and even a sample of some early vocal jazz. Indeed, the record seems to open up as it progresses, starting as a cold, closed bud and gently flourishing into something more colourful and expansive. We’re still not talking about tigridia pavonias here, more a solitary white lily, but it’s a deftly fluid progression. Although continuing that metaphor with ‘Would I Be Where I Belong’ is pretty tricky, unless you imagine said flower being dried, pressed, shredded and then chucked into a kaleidoscope – it’s an interesting strack, but hard to get a hook into.

Warm bass tones open the similarly cut-up ‘I Form A Club’, though they create a chilly pattern, with a touch of the Burials about the sad synths that shroud it. The jerkiness of the sliced up vocals provide a nice counterpoint to the straightforward bass and drums, before Amy Robina effects a similarly staggered delivery on ‘I Dream a Dream about Being Lost’, although some hypnotic acoustic guitar makes the end result altogether dreamier. It’s gorgeous in fact, not unlike an opiated version of one of Clark’s collaborations with Martina Topley-Bird.

This more luscious seam continues into ‘Deadmen’, although the latter feels a little more sluggish until the pulsating synths build up to more bruising levels. It should be the punch that delivers the album’s final blow, but sadly ‘A Dream About Being Lost’ instead finishes with the feeble slap of ‘Arkham’. An attempt to get on the soundtrack to the next Batman game/film? It’s certainly dark enough but, perhaps appropriately, it also feels too cartoonish to be truly terrifying, and isn’t helped by some cheap-sounding drums.

However, ‘cheap’ isn’t a word you could easily apply to the rest of the album, which has a classic, sumptuous, minimal feel akin to a stylish black leather armchair, which you see though a shop window and imagine being perfect in your living room, until you realise it costs twice your annual salary. ‘A Dream About Being Lost’ may run the risk of going overlooked after sneaking out at the tail end of 2013, but those who do hear it will doubtless come to the same conclusion as us – 2014 has a lot to live up to. 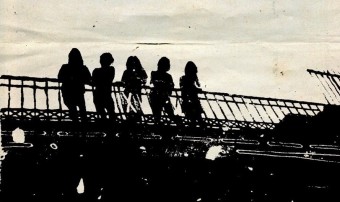 TOY's debut was one of the key albums of 2012, but do they still sound super-slick a year on? Or is their retro-fetishism starting to wear a little thin?
Read More