Just out of the way from the car crash waiting to happen that is Elephant & Castle roundabout, a sold out Corsica crowd is keenly anticipating the appearance of the dread-headed Kelela. This was the first of two sold-out shows for the LA-based singer, and was acting as something of a pre-album teaser for the small but loyal fanbase who have been spreading her tunes around the web and at house parties since 2013’s ‘Cut 4 Me’ mixtape first made an appearance.

With smoke machines on in full force, minimal ambient music and moody lighting giving the simple but effective garage space a suitable aesthetic, Kelela took the stage solo, her DJ based next to the sound desk. Kelela doesn’t really need anyone on stage with her anyway; during tracks she’s a lovelorn, passive aggressive ball of charisma, while in-between songs she emits a humbleness with just the right amount of confidence. “A year-and-a-half ago I was in telesales,” she informs the crowd mid set, “and now I can do this full time. Thank you.”

One of the benefits of most of her material coming from a mixtape is that the range of producers she collaborated with gives the tunes a variation sometimes missing from her peers (most notably FKA twigs, who she’ll no doubt be lined up against – they operate on the same planet, but not exactly the same country).

It’s not disorientating though. From the more trap-indebted collaborations with Morri$, to the dub rumblings of the Girl Unit-produced ‘Floor Show’ (which features the biting lyric “you forget my name but you say it every night”), her falsetto vocal is always the focus. She brings out an edited version of her recent Le1f and P Morris collaboration ‘OICU’, albeit without the vocals from the other two. Nevertheless, the Salt ‘N’ Pepa meets Burial, hypersexual, weed-induced croon of “get in the car/I’m taking you home […] Tell me where you want to go” doesn’t lose any of its appeal without them.

Her insistence on using alternative edits live, these being a variety of tracks mixed by the off-stage DJ, gave the show a feeling of originality and exclusivity. A proper geeky “man I loved that half-time version” set of conversations likely took place on multiple bus rides home.

Even if the encore felt a little unnecessary, losing the edge of what was a perfectly formed hour, Kelela and her fans couldn’t have been more upbeat about an early UK show from a singer who’s no doubt going to be everywhere come the arrival of her debut album proper. If the premiere of new tune ‘Messages’ was anything to go by, it will be worth the wait, too. 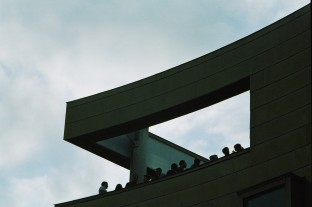 Bristol has one of the most diverse and exciting music scenes in the country, and with Simple Things, it also has one of the best inner city one dayers.
Read More