Enjoy a thorough run-down of June’s best EPs, including the melancholic electronics of EOD and a stunning debut by Cologne’s Josin…

We’ve already waxed lyrical about the title track from All Those Thoughts, the debut EP by Barcelona troubadour BENET, but you owe it to yourself to give the rest of the record a whirl as well. For while the swirling seven-minute opener might be a formidable offering in itself, it’s but a satisfying entree to the rest of the record.

The delicately finger-picked ‘Stay Stronger’ starts with sweet acoustic nothings before moving into grander territory, thanks to some distant strings. ‘Visceral Wolves’ is stalked by some shadowy flashes of organ, sounding a little like the much-missed Gravenhurst but with a slight Spanish inflection before launching into a valley of overdriven guitar and tumbling piano keys. ‘Poultry House’ offers an entirely different flavour, a fiery mixture of habanero and gunpowder, as BENET invites you to “look into my mouth… my words are gonna kill” over a stormy flamenco that billows out like oil-smoke. A dramatic climax to an impressive debut.

As a crucial member of fka Twigs’ production team, it’s no surprise CY AN knows how to create dizzyingly panoramic soundscapes. From the oscillating ‘K’ to the ultraviolet ambience of ‘Azrael Rotor’, listening to this EP on headphones will make your skull feel like it’s expanding, lashings of digital delay reverberating through the cavernous depths.

CY AN does drop beats into this sonic lagoon on ‘Minus ONE’, but they are curious combinations of tentative snicks and rigid quantization, stringing the track along but refusing to dominate – you could easily imagine Twigs singing on this one. ‘Sprawl Monoliths’ is perhaps the most effective track of all, filled with all the tense isolation and quiet malfunctions of an Alien movie (one of the good ones). Put simply, it sprawls in all the right directions.

A ripe, vibrant release on Iceland’s brilliantly named bbbbbb label, although Swurlk would’ve sounded equally at home on Rephlex back in the day; indeed, EOD released two sparkly EPs on Richard D. James and Grant Wilson-Claridge’s legendary imprint just before it closed in 2014. Swurlk surpasses both those records though, with an approach that combines springy synths with lo-fi drum machines and the occasional moment of chaos.

‘Swurlk (snarlfingercroak mix)’ kicks things off in fine style, managing to sound both peppy and poignant simultaneously, like a five-year-old’s party bag after bigger boys have stolen all the best sweets out of it. It’s a strangely beautiful mixture, boosted by some lush harmonies. ‘Evenhark’ continues in a similar vein, tear-stained synths weeping all over fast-paced bleeps and beats. Closing track ‘ELCASET-TESTGROOVE’ doesn’t quite nail the formula in the same way, but there’s still plenty to enjoy in its jittery synth freakery. Oh, and that moment of chaos? Just check out the frenzied, hyperventilating ‘Swarm’…

Epilogue seems like a strange title for a debut EP, but if it did somehow turn out to also be Josin’s final release then it would make one hell of a swansong. In fact it would make for an impressive statement at any point of an artist’s career – that it comes so early in hers suggests an unholy amount of potential. Which is just as well really, as apparently the German-Korean composer jacked in a potential career in medicine to pursue music. On this evidence, a wise choice.

Having said that, opening track ‘Oh Boy’ may prove a bit too ballad-y for some; and to be fair, your enjoyment of the rest of Epilogue probably depends on how you feel about Radiohead. As it happens, I bloody love Radiohead, so the moon-shaped chord progressions of ‘Midnight Sun’ and ‘The One (Epilogue)’ are right up my street – even Josin’s Yorke-style vocal fries are spot on. ‘Feral Thing’ starts slowly but builds nicely with some appropriately growly synths, before ‘Evaporate’ brings things to a tender close. What comes after an epilogue? I can’t wait to find out.

Hazy beats from the Berlin-based RIP Swirl, who builds on last year’s Doomed EP with four nicely frosted productions. Lead single ‘Mortal’ smudges some airy synths over a snappy beat, before the half-speed come-up of ‘Knaster’ takes things up a notch. If Arnold Schwarzenegger had asked for some pills rather than clothes, boots and a motorcycle at the start of Terminator II before wandering, naked, into a nearby warehouse rave as they started to take effect, this is what it might have sounded like.

‘Thirst’ follows with some flutey synths and crushed drum machine action, before ‘Television’ comes close to matching ‘Knaster’ for backstreet hi-jinks. Strutting along with a lo-fi 2-step swagger, the crystalline synths provide a euphoric sheen to the distorted thump of the kick, akin to what an Actress tune might sound like pre-deconstruction. Mortal good.

Palm play the sort of indie music that is often described as ‘angular’, a term that usually indicates an act who adopt some of post-punk’s intensity and discord, but without going so far as forgetting to include a tune. Certainly that’s the case with Philadelphia four-piece Palm, whose first release for Carpark Records manages to retain an irresistible catchiness despite keeping a respectful distance from anything too conventional. It’s fair to say fans of Deerhoof will find much to delight in here.

Palm deliver disjointed combos like an unpredictable MMA fighter, with shots coming from all sides – a tom thump here, a bass thrum there, and flurries of guitar targeting your temples at any spare moment. And yet, tracks like ‘Walkie Talkie’ and ‘Sign to Signal’ also manage to incorporate surprisingly fluid and enticing passages that exploit the contrasting registers of twin vocalists Eve Alpert and Kasra Kurt. Other highlights include the spicy polyrhythms of ‘Two Toes’, the thunderous dissonance of ‘Trying’ and the title track’s teasing guitar lines, but Shadow Expert is seldom less than intriguing. They play London and Brighton on the 19th and 20th of September and will be well worth a look.

Seeing is another banger from the Black Acre stable, this time courtesy of London producer Prayer. It’s a serious piece of work, both in terms of Prayer’s stated aim of contrasting “harmony with brash rhythm” and in the stern, moody disposition of the result.

The grand, gothic ‘Alone’ lets you know what you’re in for from the first moment, and that sense of scale doesn’t diminish for an instant over the EP’s 19 minutes. Synth strings and choirs combine to add a ghostly element to the rhythmic scaffolding of ‘Decline’, before the title track ramps up the tempo with a junglist refraction of the Twin Peaks theme. Prayer then finishes with ‘First Light’, drawing a dense veil of drones over proceedings in a way that is really quite majestic. Seeing may seem a bit too epic for some, but Prayer is not the type to skimp on sonic bandwidth.

OK, so it turns out this actually came out in May, but I was sure it came out in June so fuck it, it’s going in anyway. The Coathangers are always good value for a garage rock kick in the goolies, and Parasite is no different. Be it the opening 71-seconds of punk parasitology or the anti-Trump “hex on assholes” that is the rousing ‘Captain’s Dead’, the Atlanta trio manage to make even simmering rage sound surprisingly fun.

Washington legends Sleater-Kinney would’ve been proud of the scuzzily clap-happy ‘Wipe Out’ (as would most bands tbf), while the alternate version of 2016 single ‘Down Down’ roughens up the edges of the original before swapping the mid-song mash for a spooky xylophone breakdown. ‘Drifter’ then provides a well-earned breather, sounding like a homesick Beck trying to write a Phil Spector song in an abandoned railyard. The front cover may depict The Coathangers as sirens sat amidst a pile of skulls, but Parasite is well worth dashing yourself against the rocks for. 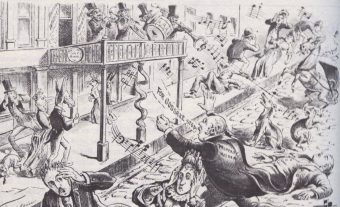 The Monitors presents forty of the best albums 2017 has thrown up so far, from Matt Martians to Mac DeMarco. Also includes a handy Spotify playlist...
Read More