From the return of At The Drive-In and Azealia Banks to fresh takes by Nnamdi Ogbonnaya and Lucia Cadotsch, delve into the most arresting new music of the week. And no, there’s no room for that new Lana Del Rey track because it’s BORING…

ARY has featured in our Nordic Schmordic column on several occasions, and ‘Childhood Dreams’ shows why. A passable and somewhat pale track on first listen, it’s not long before the chorus starts nagging away at you. Before you know it, it’s earworm o’clock. Which is what you want from a pop song innit?

At The Drive-In – Incurably Innocent

Like many kids who religiously read the NME at the turn of the century, I was a big fan of At The Drive-In. The serrated guitar riff and blurred arm drumming of comeback single ‘Incurably Innocent’ go some way to justifying that teenage fandom, but the wailing vocals and irritating chorus make me wonder whether they weren’t actually a lot more emo back then than I remember. Pretty sure that’s not the case, but like a childhood fantasy film or an eighties sitcom, revisiting and potentially ruining those memories is a daunting prospect.

Azealia Banks has come out with so much bollocks over the last year or so that it seems a bit remiss to give her any sort of platform. However, the bubbling beat and Banks’ always incendiary flow mean it’s impossible to ignore the potency of ‘Crown’. If you’re going to try and rebuild your reputation, do it with a banger eh?

The moody beat, the stylish self-directed video, the vivid, methodical flow and the sense that making it was a laugh for all concerned… everything about ‘Thrasher’ suggests a parallel universe where Odd Future was founded in South London. Which would make for a pretty strange episode of Sliders, but one with a decent soundtrack at least.

While still pining for Weaver to return to the wintry psych-folk of her The Fallen By Watchbird album, it’s hard to feel too wistful when she keeps on delivering melodies as dreamy as this. The signs seem auspicious for new album Modern Kosmology.

Jons’ self-released At Work on Several Things LP charmed its way into our belated Best Albums of 2016 list, and is now set for a well overdue physical edition on Field Mates Records. The swooning, drowsy tunefulness of ‘Trip Ads’ sums up why you should get yourself a copy.

After winning plenty of new fans while supporting compatriots Goat last year, Josefin Öhrn + The Liberation are touring Britain again with a tweaked line-up but the same hypnotic sounds. If you’ve not had the pleasure, get your ears around ‘Sister Green Eyes’ and your arse down to the nearest venue scheduled to be graced by Öhrn’s presence.

After the critical success of last year’s Speak Low album, and having recently been nominated for the prestigious ECHO Jazz prize, Lucia Cadotsch has plenty to celebrate. She’s doing so by inviting a range of musicians on the vanguard to help reinterpret tracks from that album. This version of the title track, masterminded by Swedish bassist Frans Petter Eldh, is the first to be revealed – and what a version it is. Full of verve, energy and Brainfeeder-esque progressiveness, the original’s gusting effervescence is boosted by Julian Sartorius’ flickering percussion and some circular saxophone worthy of Colin Stetson. Further evidence that jazz is becoming more culturally relevant than it has been in decades.

Chicago’s Nnamdi Ogbonnaya is a new one on me, but not likely to be forgotten any time soon. With a beat that sounds like a Francis Bebey number played at half-speed, the eerie groove of ‘hOp Off’ brings to mind the restlessly inventive approach of Busdriver and Shape of Broad Minds. Nnamdi Ogbonnaya: remember the name.

I saw Phobophobes play quite recently. Probably. To be honest I was so pissed that I barely remember anything about it. ‘The Never Never’ makes me regret that overindulgence, as the hammy organs and infectious guitars are built to tickle the parts that only the scuzziest of rock can reach. Also a bit reminiscent of The Blue Orchids’ ‘Work’, which is pretty high praise really.

If you were disappointed by Mac DeMarco’s new material (and bits of the new album do seem to be worryingly Jack Johnson-ish) then Soko’s ‘Sweet Sound of Ignorance’ might do you as a substitute. The sore and sorrowful vocals are submerged in the mix as if sinking in quicksand, but the end result is curiously weightless.

If you desperately miss the lo-fi psych-rap of Edan then you’ll be in heaven with this. Produced by and featuring a guest rap from the Humble Magnificent himself, ‘Help’ also allows you to play a rewarding game of ‘guess the sample’ (spoiler: Frank Zappa’s ‘Help I’m A Rock’ and Rodriguez’s ‘Only Good For Conversation’ are two that immediately jump out). Add in Edan as a heavy metal binman in the video and some spiky verses from Your Old Droog and Wiki (the latter on his second ear-catching guest spot of the week) and you’ve got a sure-fire formula for success. Don’t be a stranger Edan. 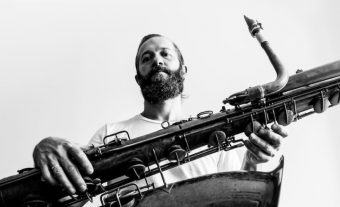