Due to the fact it’s ALMOST BLOODY CHRISTMAS we’ve combined October and November’s music video compilations into one bumper edition of MPEGs Fifteen. Yep that’s right, here are the fifteen best music videos from the last couple of months, from Francobollo’s pubic pal to Coco Banana’s cartoon car crash. (Not the OK Go one though, because you’ve already seen it.)

Playing on the idea that people who play Dungeons & Dragons are invariably wrong ‘uns, ‘Lavender’ finds BadBadNotGood chained up in a basement by an evil dungeon master. With only a vial of poison, a couple of dry one-liners and a summoned Kaytranada to help them, can our heroes escape? Either way, the dungeon master is for hire…

A word of warning – the looping effect of this made a colleague of mine feel sick. For those of us with stronger stomachs, Bonobo’s latest offers a disorientating experience that both syncs with and jars against the music, with Gemma Arterton conjuring the same feeling of frenzied fear recently channelled in The Girl With All The Gifts…

Someone once told me the key to creating a memorable persona in music is developing a style that could easily be translated into a cartoon. Judging by ‘I Did’, Bonzai’s nailed it. Probably earned herself a future cameo in Adventure Time too.

Another cracking animation. This one, by Simon Landrein, is a surreal mix of Roy Lichtenstein and R. Crumb, containing the most bizarre oral sex scene you’re likely to see before the end of the year. Although then again, I don’t know what your Christmases are like…

Hurrah, it’s another amusing excursion into the music video world of Francobollo. Although the boys themselves don’t actually appear in this one, the fact that the star is a ball of pubes, hellbent on revenge after been shaved off by the video’s heroine, makes up for their absence. (Band members do appear, however, in the similarly excellent recent videos for ‘Finally’ and L.A. Salami’s ‘Going Mad As The Street Bins’…)

***
Jane Zhang – Dust My Shoulders Off

A series of classic paintings come to life in this clever clip from Jane Zhang. Van Gogh getting his ear bitten off by a boxer, Holyfield-style, is just one of many highlights…

This is the only one of the videos created to accompany Max Cooper’s Emergence live show that I’ve seen so far. Assuming the rest are half as good, it’s clearly a show not to be missed. ‘Trust’, by animator RC Aksun, is a stylishly satirical study on the theme of altruism that stars, among others, President Trump and a robot. No surprise which one turns out to possess the most human qualities…

This sort of happy-clappy strum-a-thon isn’t the sort of thing we’d usually cover on The Monitors. However, it’s exactly that sort of earnest, cheesy grin soundtrack that makes the video for ‘Being’ quite so brilliant. The gruesome humour of this classic parasite-meets-girl romance is made all the more disgusting by its juxtaposition with Millington’s music, which sounds more like something you’d hear on an advert for Center Parcs…

The music/horror interplay is a little less unexpected here, although ‘Shadows Of My Mind’ still makes quite an impact – mainly on one poor fellow’s skull. Peder’s smoky, jazzy lament provides the perfect soundtrack to a troubling tale of a department store psychopath, featuring some stunning cinematography and a chilling lead performance from Peder himself.

I’ve been meaning to book a dentist appointment for a while, but I think this video is putting me off. The azure filter that captures Rejjie’s appointment with the pliers is gorgeous, the dental and waiting room action itself significantly less so.

Not everyone misses the late Cilla Black (certainly not BA cabin crew anyway) but let’s face it, ITV never really managed to replace Blind Date. They should’ve got Spring King on the case, as the episode of Euro Lover in their video for ‘City’ is even better than the original. Poor Penelope though…

***
The Furrow Collective – Wild Hog In The Woods

There are some great animations in this edition of MPEGs Eleven, but Chris Cornwell’s creation for The Furrow Collective takes the biscuit. A beautifully rendered video that sits in the centre of some strange venn diagram comprising Krent Able, Dr. Seuss, Chad VanGaalen and Tove Jansson.

The end of October always fills our inbox with about a million dodgy Halloween music videos, mostly from metal bands and mostly bloody awful. ‘Sick’ is the exception to the rule. A hilarious tribute to Texas Chainsaw Massacre, the music doesn’t even start till about four minutes in but by then you’ll already be gripped. Stick around for the important life lesson delivered at the end… 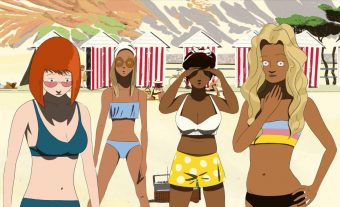