This edition of Single-Minded is brought to you by the unspecified lurgy currently waging warfare with my white blood cells. In an unorthodox medical experiment, my doctor (i.e. me) suggested I see whether recent tracks by Tasseomancy, Powell, P Money and others could potentially cure the sickness. Here are the results…

Result: Does the world need a middle-aged Beck rapping over a trap beat? No. And neither does anyone suffering with a severe case of man-flu. I can literally feel my nervous system throwing in the towel.

Result: To be honest, the Bjorkish introductory wails do nothing for my increasing nausea, while the addition of a church organ just cements the impression that my own funeral is fast approaching. However, a dose of curious beats halfway through provide an unexpectedly calming effect, and the overall impression is of what Justin Vernon was going for on the new Bon Iver album, but better executed. Condition: improving.

Result: An eye-opening collaboration between two artists who’ve earned plenty of deserved praise on here, but the lyrical combination of White Ace, laughing gas and sherbet sticks is probably not what any medical professional would recommend. The feverish delivery and sickly loop mean I’m back on the way out (although going out with a bang at least).

Result: Like a spoonful of Courtney Barnett consumed via one of Fat White Family’s filthy needles, this probably isn’t good for me but is definitely numbing the pain. Is it OK to have a whisky and honey now?

Result: The introduction initially brings the nausea back with full force, although the ticklish percussion and staggered waves of synth actually end up making me feel quite giddy. It’s probably the onset of a fever, but I’m quite enjoying it for now.

Result: Ah, some good old Oliver Wilde, this is sure to soothe the pain. Except where’s that throbbing coming from? And why does everything feel slightly lop-sided and creepy? My initial thought is that someone’s mixed up my prescription, but apparently not. Time will tell whether this new formula proves to be an improvement, but it feels like it needs more testing…

Result: Love the retro gaming production of this new P Money track, but unfortunately it also reminds me that my go-to childhood illness recreation – 16-bit console gaming – is no longer available to me. ‘Panasonic’ is decent, but I’d prefer a game of Sonic 2 right now.

Result: There’s something about this which is spurring my immune system into a fightback. The manipulated rock ‘n’ roll riff reminds me of Matmos’ tribute track to Joe Meek; maybe that explains why I’m suddenly feeling perkier. Although then again, watching Powell and pals smash watermelons with their heads is likely to make anyone who isn’t smashing a watermelon with their head feel better in comparison I suppose.

Result: This new version of a traditional English song by folk legend Shirley Collins is really lovely, adding a Wicker Mannish edge to the 1968 version she sang with her sister Dolly. The morbid theme, however, is inevitably making me revise my general prognosis downward…

Result: Bella Union have put out some belters this year, and this is another one. The regular electronic woodblock pulse of Tasseomancy’s ‘Missoula’ seems to steady my heart, as does its general Wyatt-esque wooziness. There may be hope yet.

Result: Although then again, what’s the point of getting better if everything outside that I once loved has been turned into a dormant luxury flat? Thanks Wave Pictures, now I don’t even WANT to get better (I’ll just stay in and listen to this instead).

Result: Future of the Left bassist Julia Ruzicka has got Frank Black to bellow some guest vocals over this track from her solo project, although in fairness that’s probably a refreshingly mellow change from Andrew Falkous. This knocks the new Pixies stuff for six, although the paint hawked by the protagonist sounds like it comes in a particularly deathly shade of black. Uh-oh.

Result: If that wasn’t enough to finish me off, this definitely is. Ah well, this final pounding hammer-blow of a track makes a fine liturgy (or Liturgy) to secure the safe passage of my soul. Cheers Uniform! 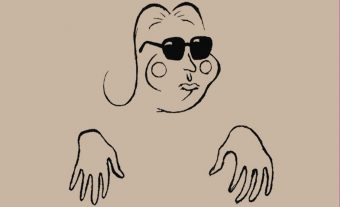