I’m pretty sure people like Adam Betts exist purely to make me feel bad for all the hours I haven’t spent practising playing drums. Although according to a colleague the intro sounds like me typing particularly furiously, so there’s that. Who knew I typed like Kid Millions playing with Venetian Snares? Kier Wiater Carnihan

This is one of those tracks that should be experienced with the video, at least the first time. Zach Stone’s crystalline creation, featuring both real gems and imitations made from ziploc bags, cellophane, and plastic trinkets, is the perfect visual equivalent of Bayonne’s sparkling, multi-faceted sound. KWC

When did Bon Iver get interesting? When he started collaborating with Colin Stetson for me, although this is more reminiscent of his work with Kanye West. In fact, it’s like someone scooped up all the off-cuts from those sessions and smooshed them together without a thought for what might happen. Fair play for trying something different, although I’ll need to hear more to work out whether I like this Bon Iver any more than the old one. KWC

I first heard C Cane after stumbling across a 1Xtra freestyle, which switched between English and the Congolese language of Lingala to such devastating effect that it even helped cement the release of a recent compilation of African and diasporic hip-hop, Afrodias’ (Génération enjaillement). ‘Levels’ proves bilingualism is just one weapon in her arsenal though – the title, rhythm and rapid-fire delivery naturally bring to mind Wiley’s ‘On A Level’, and it holds its own against that comparison too. KWC

It’s genuinely stunning that a bad as fractured and rawkus as the Fat Whites have managed to make a song as good as ‘Breaking Into Aldi’. All my post-punk and new wave dreams have come true: acid sax the Blockheads or Psychedelic Furs would be proud of collide with some bizarre children’s choir as Lias sings the refrain with a throat-destroying screech. Best thing they’ve done since ‘Touch The Leather’ and the most energetic they’ve sounded since ‘Is It Raining In Your Mouth’. Nicholas Burman

“Things change / I’m still young”, sings Forth Wanderers singer Ava Trilling, and she’s not lying – apparently she only just turned 18. Bloody kids. (As an aside: how good a surname for a singer is ‘Trilling’?) ‘Slop’ sounds like a more sorrowful Courtney Barnett, with choruses like this I’d put good money on Forth Wanderers being playlisted on 6Music before long. If it turns out they’re actually named after a tiny Lanarkshire football club I’ll be fully converted. KWC

Bit difficult to write anything about Giggs this week without referencing the recent NME fuck up, where long term music writer Louis Patterson confused ‘rate’ for ‘rape’ in a song about a girl from the grime MC’s recent album (and still managed to give it a good review!)

Not worth adding to that conversation here (though this track and CasIsDead’s half are more than enticing), although if you haven’t already read it yet, JP Patterson’s (no relation) article on Complex about the debacle is well worth a read.

Novelist – Girls Around the World

I was desperately looking for a lyric in this to ‘accidentally’ mishear in order to kick off a social media storm like the Giggs/NME one, but no dice. Hopefully just being yet another white 30-something writing about grime will annoy everyone enough. On the face of it, the brash, sparse sounds that typify the genre wouldn’t seem to lend themselves to out-and-out romance, but alongside Skepta (whose ‘Text Me Back’ was my favourite new track on Konnichiwa (I’m probably alone there mind)), Novelist proves himself an artist who can switch into lurve mode convincingly. The smooth, swooning synth tones are key here, easing the listener into the low-key, lounge-friendly tempo. KWC

Pillow Person – In My Game

Another bouncy three minutes for Pillow Person is here and I ain’t complaining. Not quite as creative as her previous track, nevertheless the game bleeps and playful lyrics make this a nicely listenable tune. NB

I used to quite like Regina Spektor back when I was a teenage Strokes fan, but I haven’t thought about listening to her old stuff for years let alone considered checking out her newer work. More fool me, as ‘Small Bill$’ is pretty damn good. The lyrics and cadences are as batshit as ever, but the production and vocal delivery are equally fantastic. In fact, the quirky hook and sense of theatre weirdly reminds me of late ’90s Eminem and Missy Elliott, which is a more immediately pleasing curveball than the Bon Iver mutation we kicked off with. KWC

If you only listen to one example of lung-blackening, planet-crumbling Inuit throat-singing this week, make it this one. In fact, you should probably just replace ‘heart-blackening, planet-crumbling Inuit throat-singing’ with ‘song’, as the doom-laden ‘Aorta’ is truly unique, and unique music always deserves ears – even if this particular track will likely leave you quaking in fear. KWC

This is almost like an Aussie version of the Fat White Family tune above, although The Peep Tempel’s anger is much more targeted. While my knowledge of Australian politics is pretty rudimentary, could the lyric about “Tony’s little factory” be a reference to recently ousted Prime Minister and noted dickhead Tony Abbott? Seeing as the song is aimed at those who’re “steering the disenfranchised and ill-informed down a path of intolerance, hate and fear”, I reckon so. Johnny Rotten himself would be proud of the sardonic delivery of the line “Over and out / That’s a wrap / Glad we had this little chat”. Which is also a good line to end on. See ya! KWC 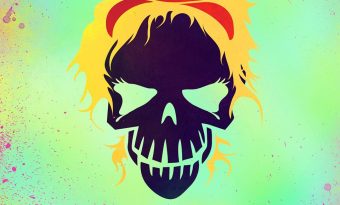 Two different tracks from the soundtrack to over-stylised superhero turkey Suicide Squad duke it out in this week's singles column (with one clear loser)...
Read More