“To those of you I’ve disappointed… get used to it.”

That’s Willis Earl Beal’s rejoinder to the people who start leaving his gig at The Forge halfway through the set.

And there are a few of them. In fact, by the end of his set I’d wager only two thirds of the audience are still in the building – and one of them emits a tentative but genuine “booooo” at the end.

I can understand the displeasure to some extent. Willis Earl Beal is a consummate performer in terms of talent, energy and charisma. However, the word ‘performer’ implies a certain deference to your audience, and it’s fair to say Beal demonstrates little of that. He puts on a show, a fucking great one in my opinion, but it’s one that pays short shrift to the ‘customer is always right’ cliché.

To be fair, he makes it clear right from the off who’s in charge. “There are two rules in the Nobody Club,” he begins, making reference to the zen-ish philosophy behind second album Nobody Knows (represented here by the sleeve art adorning both his t-shirt and the flag/cape he periodically whirls around). “Rule one is no applause. I get that you’re trying to be polite, but it just sounds stupid to my ears. So no clapping. The second is that everybody should sit down, but I notice that most of you are already seated so I don’t need to tell you that. Although I just did. Ha!”

Next he reassures us that it’s fine to fall asleep seeing as his new songs are so boring: “At least I’ll have afforded you some rest.” To be fair, he has something of a point. Whereas his early work employed a range of textures, even if generally of the lo-fi variety, his newer work is fairly one-dimensional in terms of tone and tempo. They’re harmonically comforting, and a decent foil to his live performance, but you’d have to concentrate to distinguish one song from another. Very minimal percussion – often just a single ride cymbal or occasional soft snare hit, if anything – is combined with generous but very languid layers of string synth, all played through his iPod.

At its best it’s not a million miles away from Dean Blunt circa ’13-’14, apart from one thing – the voice. It’s hard to think of many vocalists, past or present, who could go twelve rounds with the sonic blunderbuss that Beal keeps holstered behind his Adam’s Apple. There are singers with strong, rich, collar-grabbing voices, and then there’s Willis Earl Beal. Each note emerges regally from his throat, as if casually sporting an ermine gown that’s bursting at the seams, struggling to contain flexing, melodic muscles.

Speaking of which, it’s worth noting that he begins the set with some stretches and a few push-ups, as if to demonstrate his physical commitment to the performance. Because he does put a lot into it, beyond his vocal chords. Visually, with his wide-brimmed hat, tight t-shirt, leather boots and dance moves that run from the obscenely sexual to the almost balletic, Willis Earl Beal is a mix of Elvis, James Brown, Sergeant Hartman from Full Metal Jacket, a music hall adagio dancer and the Cat from Red Dwarf.

Indeed, with the significant arsenal of moves and croons at his disposal, it’s not hard to see why he was signed up by indie giant XL Recordings, who probably thought they’d nabbed the new Amy Winehouse back in 2012; or at least the male Adele. With his often bizarre between-song murmurings, which include tirades against capitalism interspersed with demands for money and/or fruit pastilles, it’s also not hard to see why they’ve since dropped him. Amy may have fallen into oblivion, but at least she had the hit songs. Willis Earl Beal appears to relish his non-mainstream status, in a way that’s magnetic for many in the crowd but draws ire from people who “just want to hear some songs” (as I hear one pisshead pine).

“Ejaculation…,” Beal intones at one point, drawing the word out lasciviously before reminding us that “you get what you pay for” while ominously removing his belt, prompting one of several slightly nervous giggles from the crowd. It turns out he’s talking about The Forge’s soundsystem, which makes him want to “cum in his pants”, and to be fair, the sound is stupendous throughout. The potentially excessive levels of reverb and delay on his vocals could be ruinously muddy in an inferior venue, but here they enhance what’s already a ridiculously impressive voice. (Beal’s lewd compliment is well-earned – I’ve been here a few times and the crystal sound tonight is par for the course.)

There are two more themes that Willis Earl Beal, intentionally or otherwise, brings to mind tonight. One is about ‘authenticity’, a difficult term at the best of times in relation to art, but one which he impressively pulls into focus. While Beal has the backstory (homelessness, outsider artist status, a stint in the army) to get any music hack salivating, he speaks his truth with a stage-friendly enthusiasm, somewhere between an evangelical preacher and a drunken carnival barker, with an uncompromising commitment reminiscent of other show-stopping artists like Johnny Rotten, Patti Smith and the aforementioned Dean Blunt. It’s very much a performance, but it’s one that rings true.

He also touches on the idea of individualism, an issue which should really be tackled more in an era when most of us regularly perform our own supposedly authentic individualism on a daily basis via social media (to that end it’s no surprise Willis Earl Beal is better value on Facebook than the vast majority of musicians). Capitalism has delivered us the age of the individual, which is not necessarily a mentally healthy era to exist in. The best defence, as Beal passionately wails at one point, is to love yourself, because if you can’t love yourself then be sure that the consumptive comsumption of our culture will soon have you hating yourself instead.

I wonder whether that’s what lies behind his ‘no applause’ stance; the fear that he’ll start to buy into it whether it’s heartfelt or not, and come to depend on it at the expense of his own, internally-regulated self-esteem. To be fair, if you had the talent of Willis Earl Beal, and the ability to recognise and judge it without the need for external validation, you might do the same. His set tonight might be self-indulgent at times, but playing songs purely for applause is like posting things on Facebook purely for ‘likes’. Willis Earl Beal might be a self-styled Nobody, ending his set with the insistence that “people don’t give a shit about you unless you’re on a stage”, but there’s nobody else quite like him right now. 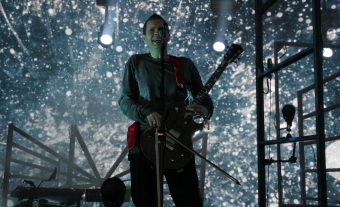