From YG & Nipsey Hussle’s anti-Trump anthem to Let’s Eat Grandma’s celebration of shiitake and Alice Jemima’s ode to liquorice, this week’s Single-Minded is both sour and sweet…

My partner eats so much salted liquorice that even seeing the word written down triggers anxious thoughts about our cupboards collapsing under the strain of a ton of black goo. The fact I managed to get to the end of Alice Jemima’s ‘Liquorice’ is a good sign then, even if the chorus doesn’t quite live up to the sultry, bongo-driven minimalism of the verses. Kier Wiater Carnihan

I normally really enjoy Nehru’s material, but despite this having a nice, if melancholy, bounce, and reminding me of Earl Sweatshirt, ‘It’s Whateva’ lacks a certain spark to make it great. Nicholas Burman

‘The Bering Strait’ very much resembles the fruit that gave Philly’s Cumquat his name: invitingly colourful at first glance but sharply acidic to the taste. There are some interesting textures at play here and a decent tune underneath them, although the clattering sound effects feel a bit too dominant after a while. KWC

Not gonna lie, I was a pretty big Garbage fan in my early teens. While the ’90s-radio-friendly ‘Empty’ isn’t going to tear up any roots, the lively chorus manages to do more justice to their salad days than most bands from that era have managed. KWC

Always a big fan of Lakker. Their material works a lot better in a long player format, but their warm and analogue brand of ambient always wins me over. NB

I quite liked Let’s Eat Grandma’s last single, and I quite like the first half of this. The second half, however, reminds me of my misguided own attempts at rapping aged 16, and that is something we can all do without. KWC

LNZNDRF’s latest is about as far as you could get from the three-piece’s previous output as members of The National and Beirut, which is a pretty positive thing as far as I’m concerned. ‘Samarra’ is six minutes of fidgety electronics executed with finesse, slowly stretching itself until it eventually crumbles into distorted rubble. Nice. KWC

Viet Cong may have got themselves a nice new non-controversial name, but we’re still waiting for them to produce some new music. In the meantime, this rattling little number from OMNI will fill the gap. While it’s a little more lo-fi than Calgary’s finest, the guitar/bass interplay is compelling enough to keep you nodding along appreciatively. KWC

Great tune, not sure how I feel about the re-promotion of tracks that are almost two years old, though the innuendo-laden video is entertaining and visually stunning. NB

Cheers to sometimes Monitors contributor Patrick Swift for sending this on. I imagine there’ll be plenty of anti-Trump tracks on the way, so it’s worth starting the playlist with this one by YG & Nipsey Hussle. (Also a big fan of the line “If it’s time to team up, shit, let’s begin.”) NB 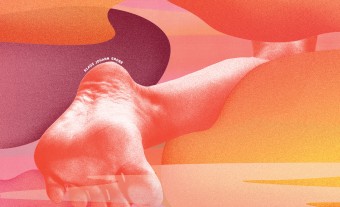 This week's singles column finds itself haunted by Snow Ghosts and under attack by Nolan the Ninja and Klaus Johann Grobe among others...
Read More