Once again we round up last month’s most ferocious selection of music videos so that you can observe them from a safe distance. This edition sees Nordic four-piece Liima terrorised by Roger Waters (or his spirit animal at least), FEMME inflicting shocking surprises on her willing fans, and the residents of Thamesmead under the tyranny of a certain Roots Manuva…

Sadly not a song about the Cameron family’s tax returns, but Adam Stafford’s moves in the video for ‘Phantom Billions’ manage to match even Dodgy Dave’s enthusiastic flip-flopping. With a pair of pretty blue eyes painted on his eyelids and a briefcase that may well have been borrowed from Felix the Cat chained to his wrists, Stafford carouses through the streets spreading a peculiar kind of joy, accompanied by some cheerful steel pans.

Judging by my Instagram feed (something I wouldn’t generally encourage unless you share a predilection for Peep Show quotes and sad street names), collage seems to be back in a big way. Canadian songsmith Andy Shauf is right on trend then with the video for ‘The Magician’, which sees a series of collages animated in charming style – almost as charming as the song itself, in fact.

Somewhere in the omniverse there is a world where Oskar Schlemmer was born half a century after Bauhaus and got into house music instead. Although actually, the stylishly surreal video for Antony & Cleopatra’s ‘Love Is A Lonely Dancer’ suggests we may have accidentally crossed into that universe last month…

***
Dilly Dally – Snakehead
There’s no way we can’t include a video that starts with the subtitle ‘music videos are bullshit’. Dilly Dally’s ‘Snakehead’ is appealing enough on its own without the sardonic accompanying commentary, but the deceptively disinterested comments are what makes it. Like a Simon Hanselmann comic where even less happens than usual, and I mean that as a compliment.
***
FEMME – Light Me Up

Visual proof that torture can sometimes be acceptable, ‘Light Me Up’ captures the faces of various FEMME fans as she surprises them with air horns, buckets of ice and, somewhat more kindly, puppies. The slow motion reactions work brilliantly against the brightly coloured backdrops, although it does make me slightly worried about what ambushes may lie in wait at her album launch party at Corsica Studios on Wednesday night…

Symbolism overload in this incredibly unsettling piece accompanying John Kaada and Mike Patton’s latest collaboration. With visual imagery that runs from butchered pigs to a disturbingly incestuous dip in ‘mother’s milk’, the colourful scene at 2.57 is particularly arresting…

More hidden horror in Liima’s latest video, which begins with a crazed, bloodied, half-naked man emerging from a tunnel while his companion succumbs to some unseen beast – much to the consternation of the local workers and dog-walkers. Directors Plastic Zoo manage to make the most of a simple setting, and certainly succeed in achieving their stated intention: “You know that feeling when you switch on the TV late at night and catch the last few minutes of a film and you think, “wow, that was awful and made absolutely no sense!” but you still wanna watch the whole thing? Yeah, that…” However, I must admit to feeling slightly disappointed that the monstrous villain doesn’t turn out to be Roger Waters, as Liima promise in the song’s title.

You know that trick to avoid rotten eggs by seeing if they float or not? Can you remember whether it’s the floating ones or sinking ones that are bad? No, me neither. Still, I do know that if your fried egg contains eyeballs then they’re probably best left in the pan. Sadly the protagonist of Palehound’s ‘Molly’ is less sensible, with predictably poisonous results. If you like your fry-up with a side of Fear & Loathing, ‘Molly’ is definitely the dish for you.

In which Mr. Manuva casts himself as Thamesmead’s answer to Omar from The Wire, only with better taste in dressing gowns. A Sunday afternoon stroll to the shops sees Rodney Smith’s neighbours ducking for cover in the most amusing Roots Manuva video since the one where he returned to his old school, solely so he could finally win the egg and spoon race. No surprise that he lives at number 420 either.

***
The Spook School – Speak When You’re Spoken To
The appearance of Josie Long at the beginning of this video from The Spook School immediately suggests we’re in for a mirthsome time, and so it proves. Playing a pet shop owner who warns a prospective customer off buying a Russian hamster (“horrible personalities”), Long instead foists a far more labour-intensive pet on the poor man… 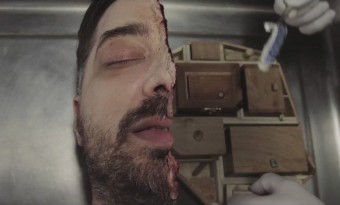 From the split skull of Aesop Rock to a chicken shop Sweeney Todd (via a couple of shorts even more unsafe for work), here are last month's best music videos...
Read More