A slightly deranged voice, eerie background music and a small shadowy figure suddenly appears in the middle of the stage. The slender girl begins to sing, almost timid, almost human. “Whatever song it is I’ll sing it” proclaims a sweet voice. But something is off. Almost uncanny.

The construct of the perfect popstar is no longer Britney Spears but a 3D hologram by the name of Hatsune Miku. Unlike Britney she won’t fall to pieces in front of our eyes. We have to do it for her. Or rather, conceptual artist Mari Matsutoya is doing it for us. Together with choreographer Darren Johnston, virtual artist LaTurbo Alvedon and digital artist Martin Sulker she has put together the performance Still Be Here. Electronic musician Laurel Halo provided the soundtrack to Miku’s short life at CTM festival on the 5th of February in Berlin.

The collective is doing precisely what Miku creator Hiroyuki Itoh intended: making Hatsune Miku come to life by giving her a piece of oneself. Be it the voice, the lyrics to a song, the moves to a dance: Hatsune Miku is always the construct of the collective, of her fans, of the “creative commons”. For Itoh she provides a 3D animated sharing platform, where contributors can express their feelings and ideas through her songs. But is that really all she is? The thousands of Japanese fans screaming to the oversized hologram on the stage of a massive stadium suggest mania rather than creative flow.

Dismantling her image piece by piece, the artists discuss nothing less than questions of identity, reality and possibly the loss of humanity. Like the modern individual, the 21st century superstar is not so individual any more, and yet unique. Forever sixteen, she is the ideal popstar. Forever innocent, yet sexually provocative in miniskirt and pigtails, she attracts all genders and ages. She is the product of humanity’s desire to never grow old and the constant striving for something that us humans will never reach: perfection.

Still Be Here takes this perfection apart, “unmakes” it. The performance traces the ready-made product back to its origin: Vocaloid, a voice synthesizer program originally designed for professionals in the music industry. By disassembling Hatsune Miku into single components and putting her back together slightly wrong – the voice deformed, the moves off – the artists show the cold electronics behind it: void of feeling and humanity. By showing a middle-aged white man dressed up as Hatsune Miku they show the desperation behind the desire.

By juxtaposing the humanoid figure on stage singing about the all-too-human need for companionship with an interview given by Itoh referring to her as an object, the artists critically discuss the complexity behind her non-existence. The small projection on stage can only give a glimpse of a Hatsune Miku performance and yet is somewhat enticing – not because of the actual manga girl trapped in a rectangular screen but because of the myth around it. She is the embodiment of the modern individual given the illusion of choice, while living someone else’s design. Uncanny.

Hatsune Miku and Still Be Here are on tour with shows scheduled at Donaufestival in Austria and London’s Barbican. 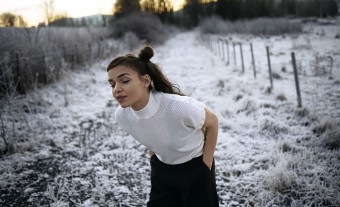