Ahead of Dave Gahan’s show at the Shepherd’s Bush Empire on Monday night, you could feel the excitement as the crowds gathered in front of the stage. Leather jackets everywhere, a guy to the left of me was so excited that he’d come dressed as Exciter-era Dave, complete with gelled-back hair, shiny red waistcoat and cross tattoo on his arm. The pre-gig excitement upped a notch when Andrew Fletcher took his seat at the front of level one. You’ve never seen so may people scream at someone sitting down. It seemed, to me, a metaphor for Mr Fletcher’s career in Depeche Mode.

There was no support band last night, so people found their spots to the strains of various blues and rock tracks. It was hard to imagine Dave getting away with such a playlist had he been doing his day job. When the strains of Led Zeppelin’s ‘Kashmir’ filled the auditorium, it felt to me as though Gahan was calling down the gods of rock, daring them. Surely this wouldn’t be the last song before Dave and the Soulsavers made their entrance, surely not?

Of course it was.

Resplendent in a red jacket, bright against the darker tones of the band, Dave arrived and dived straight into ‘In The Morning’, from 2012’s The Light The Dead See. The drama of this track was a perfect scene setter for the evening. As when I saw Depeche Mode in 2013, I was struck by just how clear Dave’s voice was against the music swelling behind him. This is a man who, obviously, knows what he’s doing. No surprise, after 35 years.

The cacophony of ‘Shine’ – “Liiiiight, there is a light and it shines down on you” – threatened to drown out the Basildon baritone without quite managing to, and then we were off on a run of tracks from the new album.

As Angels and Ghosts has been out all of four days there hasn’t been much time to get familiar with it, but one of the tracks that immediately stood out to me was ‘Tempted’. Okay, lyrically, with its angels and tales of love lost, it’s nothing new to anyone who’s ever heard a Depeche Mode record, but what sets it apart is the music. I really love the chiming blues feel of this and, naturally, Gahan’s impassioned delivery lifts the song.

Plus, I really enjoyed these lines: “But she said I’m not bothered / And you’re the same / Well I’m done with love / And you’re to blame.” I think Martin Gore would have been proud of that. For me, those lines highlight the fact that whilst Dave’s songwriting needle seems a little stuck in the groove of addiction and recovery, he can show a neat turn of phrase. He can also, as would be demonstrated later on, laugh at himself.

‘All Of This And Nothing’ was the first track from the new album to be shared with the world and, last night, its percussive intro turned the Empire into a sea of hands. Personally, I’m not sure the song was so deserving of the properly rapturous welcome it received, but I couldn’t begrudge Gahan it. I just happen to think he’s written better songs.

Like ‘Presence of God’. This track has been described as one of Dave Gahan’s career highlights and last night, as he sang accompanied only by a couple of guitars and some light drumming, it was easy to see why. It’s in moments like these, which he doesn’t usually get with Depeche as Martin tends to handle the slower stuff, that you can really see the singer Dave is. If it wasn’t for the cameraphones everywhere yesterday, this really could have been just him and me. It felt, weirdly, like you actually were in the presence of God.

By way of contrast, Dave’s vocals, for pretty much the only time last night, were a little creaky on ‘Just Try’, but that would soon be forgotten. 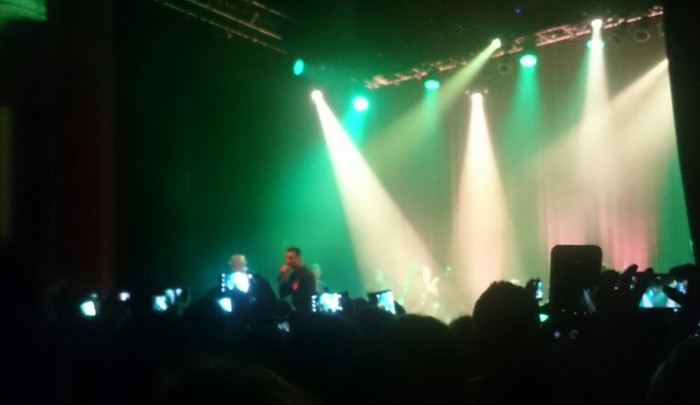 ‘Don’t Cry’ was a stirring, rockier number, although its lyrics appear to have been generated by going through Martin Gore’s songbook and just throwing all the words in it into a random lyric generator. Maybe. Whilst on the subject of musical larceny (which we are, sort of), on ‘The Last Time’ (there’s that Gore songbook again), the Soulsavers seemed to morph into Nick Cave’s Bad Seeds. Flanking Gahan as he once again scratched the wound of his (long since kicked) heroin addiction, the backing they produced must have had Warren Ellis twitching somewhere.

And then Dave produces a lyric like “Have you ever followed Jesus / He lives in downtown LA.” This man has been paying serious attention to Nick Cave, hasn’t he? We all know about Dave’s time in downtown LA, so there’s something quite knowing about this lyric. Particularly when he delivers it with a big smile on his face.

‘Take Me Back Home’ was an undisputed highlight on the first Soulsavers album and here the gospel backing singers gave it a real lift, which was further augmented as the audience got properly involved for the first time. On ‘My Sun’ we once again saw a flash of Gahan’s wit as he sang, “I’ll never get old / Not older than you / I’m a sinner I’m a saint / I’m nothing without you.”

Now these aren’t lines that, when you’re sitting at home, are going to have you proclaiming Dave Gahan the logical heir to Leonard Cohen, but they work live. Gahan brings you, the listener, into his world.

The cheers would only get louder during a barnstorming encore, which began with a Soulsavers version of 2007 electro stomper ‘Kingdom’ and continued with one of the highlights of the evening, ‘Dirty Sticky Floors’. Personally, I think Dave never really needed to write another song about his addiction period after this one, it says it all and does so with a rueful grin. Of course, Dave being Dave, it turned into an utterly euphoric singalong which paved the way for the closing pair of tracks.

When you’ve performed a set with such obvious blues and gospel stylings, there aren’t many Depeche Mode albums you can turn to for a couple of old favourites. However, there is Songs of Faith And Devotion. And there is ‘Condemnation’. I’ve never been a huge fan of this song, but anyone not moved by the crescendo Dave and his backing singers took this song to last night would need their pulse checking. What a moment.

‘Walking In My Shoes’, one of the songs Dave is on record as saying he felt Martin had written for (and about) him, closed out the set. Thinking about it, I was so lost in this moment I can’t really tell you how I felt. Though I do remember thinking it was good to hear a guitar dominated version of Alan Wilder and Flood’s classic arrangement. And that, for all the undeniably good songs Dave has written, he’ll be writing them for a while longer before he tops that one.

I’m not complaining though; it would be churlish to after an hour-and-a-half spent in the company of one of the great frontmen of our times. Last night, I saw something. I saw a happy and engaged Dave Gahan.

I saw Dave Gahan as the rock star he has always wanted to be. 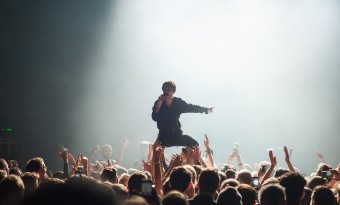 While Dean Blunt strobed the Simple Things crowd, Savages used them as a fleshy stage during perhaps the best edition of the Bristol one-dayer to date...
Read More