Festival season isn’t so much a season any more as a year-long experiment on just how many different events can co-exist. There’s a number of reasons for festivals being a dominant way people experience music now – licensing and costs strangling venues, grassroots gig goers existing almost solely in cities – but one of the main ones has to be that it gives people an excuse to go on holiday.

Last weekend’s DGTL was on a bit of a holiday itself, the Amsterdam-based event replaying itself at Barcelona’s Parc Del Forum (the same concrete space Primavera inhabits, albeit here on a smaller scale), and with it brought the most out of town crowd I’ve come across at a festival since I went to one of the Croatian summer events a couple of years ago. A mixture of Dutch, French and English gurned through an unusually chilly and wet August weekend to get down to some techno and house.

The first thing to say is that DGTL certainly put the effort into the design, although the weather sadly killed any chance of ‘lightening bolt artists’ or all of the lighting rigs being utilised. However, the shipping container crates that surrounded the site, the steampunk dragon that came to smoke-breathing life later on, and the decent stage designs with their split screen backdrops were certainly impressive given this was the first time the festival had taken place in the city.

Combine that with the really great sound quality (every stage managed to kick and uplift its audiences in equal measure), a sensible lack of (visible/angry) security (which always makes a festival environment a little more at ease) along with a more than manageable site (you could see everything for at least an hour if you’d like) and we had ourselves a pretty sufficient party environment.

Spanish producer Baldo was the first set I caught, performing his ‘BLD Live’ show, which essentially meant he was the only act I saw keeping away from the decks and focusing on a laptop and drum machine set-up. As a result he was, unsurprisingly, able to create one of the most cohesive two hours of the Friday. Taking a step back from the straight-faced techno of the larger Digital stage his wobbly, acid house leanings drew a crowd and kept them.

When the rain started to arrive the driest place to be was under the solar panels at the Mono stage, which was lucky because fellow Brits Pearson Sound and George Fitzgerald were lined up one after another. Pearson Sound’s echo chamber techno was lively and deep, with a few welcome veers into more jungle-y vibes. Everyone in danceland seems to have been a bit down on George Fitzgerald’s album, maybe because it’s essentially a pop record parading as a house one, but nonetheless by 1am most of the assembled crowd including myself were perfectly willing to let the mellower vibes take control.

If there’s one complaint about DGTL’s Barcelona debut, it’s that it all ended a bit suddenly; 3am is an early end for a party like this, and although there was an after party at Apollo, hopefully next year the weather and the crowd can hold out for a little longer. Apart from that, by the looks on the faces of the attendees at clearing out time, everyone was midway through a pretty decent holiday. 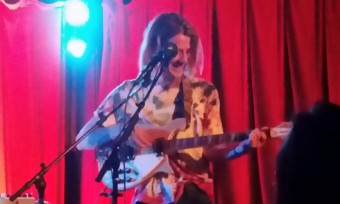 No one can accuse ex-Girls man Christopher Owens of lacking stamina, although he does have to recruit an extra member from the audience during his 2-hour, 3-set performance in Seattle...
Read More