Yesterday we published an extended feature about why we feel the saxophone is in particularly rude health right now, thanks to the exploits of bands like Melt Yourself Down and musicians like Colin Stetson. In this follow-up piece we ask our favourite saxophonists about the history of the specific saxophone they play, and get their views on the greatest saxophonists in history…

Where did you acquire your current instrument, and can you tell us a little about its history?

Verity Susman: Since the late 1990s I’ve bought all my saxophones from Rupert Noble who was an early bass player in Electrelane, and is notoriously (in the sax world!) the best saxophone repairman in the country. I have a soprano, alto and tenor. Both my soprano and tenor are Selmer Modele 26, made in the late 1920s. I got the tenor over ten years ago, and the soprano last year. As they’re old horns they are quite idiosyncratic and perhaps not as comfortable to play as modern instruments, but I really like their sound. My alto is nothing special, not worth mentioning!

James Allsopp: I traded a spare tenor sax I had for my Selmer mark VI Baritone about 8 years ago. it was made in 1960 and it looks like it has been given some heavy abuse in its past!

Shabaka Hutchings: At the moment I play a Conn 10M which I’ve played for the past 4-5 years. This is an American-made instrument from about 1936. I took a slight detour about 2 years ago and started to play an unlaquered Conn transitional model from 1933, which I had to stop playing since my sweat is pretty acidic and it was really corroding the metal. I really love playing Conns, they have really big bores and it feels like less of a ‘given’ sound than you get with Selmers and other modern horns, so you can really craft the sound you want from them. Also, they can make a colossal sound when really pushed. When my sax is in top working condition I feel like I’ve still not ever reached the limit of how far it can be pushed in terms of my physical self verses the metal.

I got the sax from my ‘dealer’ in Brighton, Rupert Noble, who trades in old horns. I tried out a bunch and this one was the horn that seemed the most mysterious. It felt like the horn had little secrets, areas within it that wouldn’t give themselves up without dedicated exploration. So I got it. It has been a struggle, since one has to have a pretty firm idea in one’s head about the tuning of each note to emerge from the horn when you play a Conn. The basic fabric of the notes feel more spread than on other saxes so there’s more of a margin for unfocused notes.

I don’t know a lot about the particular history of my sax. I just tried it in the shop, made sure there were no structural problems and left with it.

Mark Lockheart: My current horn that I play is a 1956 silver Selmer MK 6 tenor that my dad brought for £60 in the classified section of the Portsmouth News in 1976. It was pretty beaten up and was a Royal Marine instrument complete with a special RM issue serial number. After getting it re-padded and re-sprung it played pretty good. I used this horn for many years in Loose Tubes and my own groups from 1981 till 1992 and it features on lots of my early recordings. I then brought another instrument (mk6 tenor) which I played until about 4 years ago when I got the silver one out again. I then brought a Selmer solid silver neck which I use with the Silver tenor and its mega now, totally love the sound and response I get from the instrument.

Colin Webster: I have a few, but none are particularly old or vintage or anything. The baritone I have I bought from David O’Connor – an excellent improv player based in London.

Colin Stetson (from this previous interview): Yeah, what is it, a hundred and five [years old]? I found it on eBay in 2005. It was a guy in Illionois was getting rid of it. He’d played it in the past but I guess it hadn’t seen too many gigs for a few decades [laughs]. So I was able to get it, and since then haven’t spent much more than a day or two without it. It’s been all over the world.

… I bought it sight unseen. I’d seen it on the computer and I had several really intensely talented repair men who scoped it for me and asked questions, and figured that from what they could see there weren’t any problems. In the end it was a steal, considering all the time I’ve been able to spend with it. It’s a phenomenal instrument.

Pete Wareham: My current instrument is a prototype for a saxophone being made by a friend of mine in Leeds. At the moment it’s called a ‘Red Back’ but that may change. Before that and for years I played a Selmer Super Balanced Action from 1949 – an absolutely incredible horn. But as soon as I started playing the new one I just switched immediately – it’s that amazing.

Michael Wilbur: My tenor sax was given to me by a very kind man named Miguel Manuel. It used to be owned by the legendary saxophonist, Sonny Stitt. It’s a Conn 10M from 1941. So nice.

Who is your favourite saxophone player, both living and dead?

Colin Stetson: The idea of singular favorites is strange to me, so I’ll just say:

James Allsopp: Ohhh, too many choices – Charlie Parker for his fearlessness, John Coltrane for his ecstatic spirit and complexity, Albert Ayler for his joy and Lester Young for his effortless beauty.

Mark Lockheart: My favourite living saxophone player is Wayne Shorter by far. His sound and improvisational concept has inspired me throughout my whole career, I love everything he has ever done. Johnny Hodges who played alto sax is probably my favourite deceased saxophone player as he’s so distinct and transcended the ‘nuts and bolts’ of playing the instrument.

If you were to recommend one piece or album to convert someone to the saxophone, what would it be?

Colin Webster: I don’t think I could.

Verity Susman: That’s a hard one. But for people who are turned off by ‘smooth’ sax, I’d recommend listening to John Coltrane’s abrasive playing on the piece ‘Living Space’. I love the way he explodes on the soprano as the track progresses, it’s really exhilarating and cathartic to listen to.

Colin Stetson: Would really depend on the individual, where they were coming from musically. But, I think a safe bet would be the track ‘Maceo’ by Maceo Parker, off of his record Doing Their Own Thing. Kinda impossible not to like that.

Mark Lockheart: ‘A Remark You Made’ played by Wayne Shorter, from Heavy Weather by Weather Report.

Sax Appeal: Why we're hanging on the saxophone... 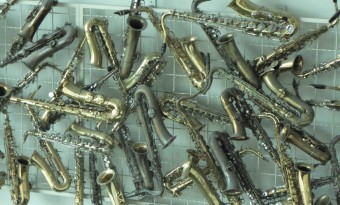 The saxophone seems to be storming underground music right now. We spoke to our favourite contemporary saxophonists to see if they could tell us why...
Read More