It’s good to smile. That’s not just a page ripped out of the Little Book of Twee Sentimentality, it’s actually been proven in real life studies by people far, far cleverer than you. Not only does the act of smiling release dopamine, serotonin and endorphins into your bloodstream, it also apparently makes you appear more attractive and sincere to other people. Assuming you don’t have a really creepy smile.

Even looking at someone smiling has a positive effect, as a study has shown that people find it almost impossible to frown when looking at an image of someone smiling. In fact, their face naturally goes to imitate the grin in front of them, thus spreading the sweet circle of serotonin release. Mmmmm.

For this reason, the best thing you could do right now is watch Alex Calder’s new video for ‘Lola’, for it features him beaming like a loon from start to finish. And why not? The track is a subtle delight, and after releasing an endless stream of brilliant EPs (not least the superb Time from last year), his debut album is finally slated for release on Captured Tracks in January.

‘Lola’ is a lush taster, still imbued with the shambling tunefulness of Makeout Videotape (the band he and Mac DeMarco used to play in) but with an entrancing ambient touch, not unlike the sort of stuff Deerhunter’s Bradford Cox used to release as Atlas Sound. The DeMarco connection is more obvious in the video itself, which sees Calder skating down the street with that infectious grin plastered all over his face, partnered with a healthy dose of his former partner in crime’s taste for partial nudity.

The video was knocked out in just 30 minutes with no real plan, but that just makes it suit the tranquillized sunshine of Calder’s lo-fi stylings all the more. Turns out that his music is as infectious as his smile…

Theo Bard - You Give 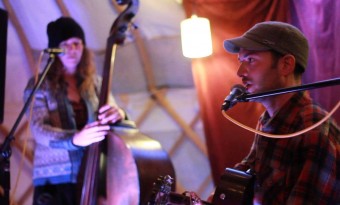