Eminem’s The Marshall Mathers LP was one of the first albums I properly knew back to front. I was 14 and angry for little discernible reason. It was a record that could say the things I wouldn’t, but its unending sense of anger resonated with me at the time. It was abusive for the sake of being abusive and for me it felt like a violent, scathing but private soundtrack in my ears that no one else knew was raging. A massive part of the appeal was inevitably how much every adult with any sort of authority hated it to their core. I wasn’t even a rap fan, but there was something about the meticulous construction of the record, its clearly defined characters and the the visual nature of the lyrics.

I was revisiting The Marshall Mathers LP recently and it really hit me how post-modern a piece of music it is. On its surface it’s sexist, homophobic, sociopathic, deluded and all other kinds of fucked up but it’s also one of the most self-aware and self-referential albums I’ve ever heard: “Oh, now he’s raping his own mother, abusing a whore, snorting coke, and we gave him the Rolling Stone cover?”

Slim Shady, the nihilist alter-ego of Marshall Mathers’ Eminem, is out to corrupt your kids and blatantly add to the disintegration of the social fabric. He is a meticulously constructed personality and the dynamic between Slim, Em and Marshall plays out as an intensely clever, often funny and at times cathartic (for better or worse) type of entertainment.

Almost everything Slim says is brought into question by the context of the album and its other characters. Eminem, the rapper, is the overarching brand; Slim is his no holes barred, demented alter-ego; Marshall is the introspective human, the one who suffers the fate of Eminem’s fame and the one who ultimately answers for Slim’s lyrical crimes.

From start to finish there are endless references to and conversations between the three, often explicitly dealing with the fictional Slim Shady as a universal personality trait that can’t be contained (“In every person there’s a Slim Shady lurking”), as a real person or as a media fixation. The two most obvious examples within the record being singles, ‘The Real Slim Shady’ and ‘The Way I Am’. There are continual references to the record being made, the public perception of Eminem, and at its most personal Marshall, specifically, repeatedly failing to deal with his fame and his family. Plus the whole thing is littered with pop culture references at every turn. It’s all meta as fuck.

A lot of people failed to grasp that fictional construction, from parent groups to, I’m sure, many of the record’s listeners. All of whom were prepared to take the record on face value and either embrace or decry its apparently violent message. For me it’s an album that was shining a light in the darkest parts of American society (albeit for the sake of gratifying entertainment), more than it’s an album that is glorifying its headline-grabbing worst parts.

Fast-forward 15 years and many are critical of Brand Eminem’s recent comments about punching Lana Del Rey in the face (twice) as if it were something a man named Marshall Mathers might be capable of doing. On the surface it’s great that society is trying to hold that sort of awful shit to account. However, I’d suggest this particular act of violence is something that Slim Shady is compelled to do and it’s all a part of the fiction that’s been trolling everyone since the mid-’90s, often by doing nothing more than holding up a mirror to the very worst parts of our society.

But why Lana Del Rey? For my money it is because her brand is the most intertextual target of all. Lana Del Rey has expressed a love for Eminem’s music and the depth of his lyrical content, whilst the Lana Del Rey persona (listen to ‘Ultraviolence’) has itself dabbled in the realms of domestic violence: “He hit me and it felt like a kiss.” The surrounding references to Ray and Janay Rice are antagonistic and offensive in the extreme, but the Rice’s themselves have been reduced to media fodder, making the whole gambit unmistakeably flippant and unmistakeably Shady.

“I may fight for gay rights, especially if the dyke is more of a knockout than Janay Rice / Play nice? Bitch I’ll punch Lana Del Rey right in the face twice, like Ray Rice in broad daylight in the plain sight of the elevator surveillance / Til her head is banging on the railing, then celebrate with the Ravens.”

If Eminem’s latest album is called Shady XV, then I think it’s safe to say that the character is back and potentially more exaggerated than ever. Or, I’m completely wrong and Eminem is actually the biggest cunt on the planet.

Return to The Island this Halloween 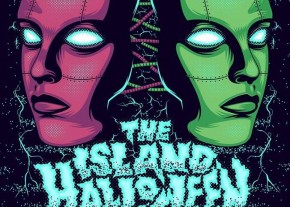 This Saturday will see the party return for a Halloween special with some pretty spooktacular guests. But, almost more importantly, also some free Tequila.
Read More