Having been enchanted when first hearing Grouper’s breakthrough album Dragging A Dead Deer…, the opportunity to review her latest offering, Ruins, was something I couldn’t turn down. There aren’t many artists out there who are fortunate enough to have marked out a sound which they can say is wholly unique and recognisable, but Liz Harris’ ambient sounds are distinctively her. The reverbed vocals and layered DADGAD tuned guitars and hushed bleakness and aching beauty.

On Ruins, a document of her time during a residency in Portugal, she strips the instrumentation back further. Recording with only a 4-track recorder and upright piano, with all the ‘mistakes’ left in warts ‘n’ all (including microwave beeps, birds chirping, rainfall and constant background hiss audible throughout) she steps out of her comfort zone as she captures her surroundings, emotions and thoughts. She said, “It was the first time Iʼd sat still for a few years; processed a lot of political anger and emotional garbage,” and you can sure tell.

Opening instrumental ‘Made of Metal’ sounds isolated. A field recording with repetitive beats, it sounds as if it could have been recorded by a tribe of old, ready for a sacrifice with its primal call as it seeps into ‘Clearing’, with its sparse piano and lullaby melody. It’s clear that this record is a study in isolation, loneliness and longing. The fact the Harris was hiking several miles to the beach during non-recording time seems perfectly apt. “The path wound through the ruins of several old estates and a small village” – you can envisage the long walks through a decrypted scene, inspired and overwhelmed.

‘Call Across Rooms’ is like a mournful love letter which feels uncomfortably personal, as if you’re sharing the same room as she’s recording it. ‘Lighthouse’ sounds hypnotic with its winding notes spiralling into a daze, and ‘Holding’ is probably the closet we get to “classic” Grouper. Her vocals are layered over delicate, simple chords repeated, and rather than drowning in all the baggage she refers to, it sounds positively optimistic.

The album doesn’t hold much in terms of variety aurally but that’s to be expected; it’s undoubtedly her and neatly realised. Unfortunately, the inclusion of 11-minute closer ‘Made of Air’ (an instrumental, ambient piece recorded at her mother’s house way back in 2004) is out of place in the context of the recordings. Still, if all her previous work contained some kind of heavenly and other-worldly essence, then Ruins is a down to earth dose of reality. It’s a snapshot of her trip and makes for compelling, although not easy, listening.

The Coral – The Curse of Love 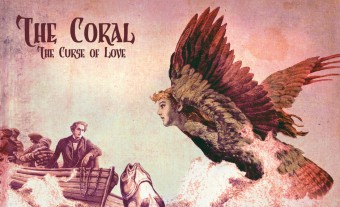 Our very own exile from The Wirral, Emma Hall, takes a trip back in time with her fellow woollybacks, 'fake Scouseland' psychedelicists The Coral...
Read More