In the second of our series analysing film soundtracks, we critique the OST to Martin Scorsese’s The Wolf of Wall Street…

There really are two kinds of celebrity DJs (1): the try-too-hard, and the try-not-so-hard. In the former category are those eager to be taken seriously at a craft they will never have the patience nor dedication to master — see: the poor sod stuck between Paris Hilton’s legs trying to beatmatch songs for her (2) (this, by the way, is not a euphemism). In the latter celebrity DJ camp are those happy to lend their names to a night so that punters may bask in the warm glow of their fame by proxy while crossfading an iTunes top-ten and calling it a set.

It would be unfair to imagine how dear old Marty would fare behind the wheels of steel, but if The Wolf Of Wall Street is anything to go by, this writer guesses he’ll probably be the kind of performer who shows up whenever he wants to play whatever the hell he likes (3). Because no matter how many excellent songs appear in the film, the sad fact of the matter is that they pop up without any consistency, thematic continuity, rhyme, or reason.

Case in point: the opening scene. We begin with a sequence of standard V.O. / establishing shots soundtracked by Elmore James’s excellent ‘Dust My Broom’, then cut to some cheesy disco tune for a few frames of archive footage and angel dust in the crack (this is a euphemism) before going straight back to Elmore. We then cut to Howlin Wolf’s ‘Spoonful’ during the same monologue because… wolf? As any amateur filmmaker will tell you, cramming songs together achieves little except wasting sync money and creating a confusing sense of pace. DJ Scorsese’s BPM, in short, is all over the shop.

Unfortunately, it isn’t a one-off. Later we get Ian Dury’s ‘Hit Me With Your Rhythms Stick’ or Cypress Hill’s ‘Insane in The Brain’ (because the characters are insane in the brain) indiscriminately mixed with Eartha Kitt and the Foo Fighters, a bunch of Bo Diddley tunes (4), Billy Joel, Plastic Bertrand, or Devo’s ‘Uncontrolable Urge’ (because… you get it). The problem here isn’t so much that the songs do not stick to one era, or that they teeter on the edge of triteness (Purcell for the epic druggy slow-mo; ‘Bang! Bang!’ for the ‘what fun we had’ montage). No, what matters is that it sometimes seems as if someone grabbed a bunch of songs they loved, threw them in the air in the editing room and left them where they landed on the film’s final cut (5).

Speaking of editing, it is no secret that The Wolf of Wall Street had to be viciously slashed from a 5 hour long first cut to a mere 3 hours for its rushed release. We cannot image how hard it must have been, especially when the parti pris was to let your actors’ ad-libbed scenes run their course. Yes, they had fun, and so did we. Yes, the film still ends up 30mins too long and follows the ‘and then this happened’ model that most biopics cannot seem to escape. And while some argue that the chaotic selection of songs reflects chaotic times, one would hope a director of Scorsese’s caliber would be able to tie his scenes together without relying on the old artifice of gluing them with background music. Too much of a good thing ends up cheapening it, whether it’s early blues classics or Leo’s Greek God golden thrusting backside (one last euphemism for the road).

1. Celebrities who happen to DJ, you understand. Not DJs who later became famous, e.g. David Guetta.↩

2. This writer is somewhat ashamed to bash on such an easy target for such an outdated reference, but it’s the most significant example he could come across.↩

3. We will here give full responsibility to Scorsese when of course Randall Poster, his music supervisor, is equally to blame. ↩

5. This review excludes the film’s original trailer which made excellent use of Kanye’s ‘Black Skinhead’. Do you remember the raw energy, the war drums, the lyrics of a man on the edge of losing it and the promises of debauchery? Do you remember the frisson of anticipation you felt when you first saw it in the cinema? This is what happens when music and images are perfectly paired.↩ 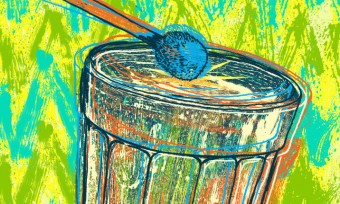 Win a copy of a brand new book and CD detailing the best music, art, film and literature in Brazil, as the nation prepares to kick off the 20th World Cup...
Read More