Bruce Dickinson, John Denver, Kris Kristofferson, Jimmy Buffett, David Lee Roth and about a dozen country musicians you’ve never heard of – not necessarily a list you’d expect to find a drummer from an up-and-coming West Sussex three-piece completing. But Adam Stock of Chichester’s TRAAMS is indeed part of that elite squadron who’re as comfortable in the cockpit as they are in The Cockpit: the flying musician. In fact, if you have a gander at the Flying Musicians Association, or read this pilot’s theory that flying an Avro Arrow is like playing Also Sprach Zarathustra by Strauss, you might be forgiven for thinking that musicians who take to the skies aren’t all that uncommon. Whatever. You don’t see Ellie Goulding in a glider or The Vaccines doing the Big Vixen do you?

Still, while Stock’s private light aircraft licence remains pretty impressive to those of us who struggle to keep a paper aeroplane off the ground (never did get the knack of those winglet tips), it’s his band that are soaring at the moment. After struggling to find places to play in their sleepy hometown, the trio, completed by bassist Leigh Padley and frontman Stu Hopkins, started playing in the somewhat livelier city of Brighton & Hove. The move paid off. A load more gig opportunities allowed them to build up a noisy head of steam, and fortune struck when they were asked to play a birthday party at notorious anarchist centre The Cowley Club. The birthday boy turned out to be an A&R man for legendary local label Fat Cat who was impressed with what he saw, and it was Fat Cat who put out the band’s Ladders EP in June.

Listening to the lead track on Ladders gives you a good idea of why they were signed – sharp, brittle riffs with touches of Richard Hell, Wire and The Ramones – and the other tracks they’ve unveiled to date are similarly splintered. ‘Jack’ contrasts a ridiculously tight rhythm section with yelpy vocals and wobbly guitar notes that stagger into each other like drunks leaving a pub, while ‘Peggy’ marries the carefree punk of former tourmates FIDLAR (what is it with these guys and capital letters?) to the falsetto garage of Wavves. Then there’s ‘Mexico’, one of those songs that affects a slurred, slacker disposition despite being as strict and muscular as a PE teacher who’s been on the ‘roids.

It’s got our appetites thoroughly primed for their debut album, due for release on 16th September, and the fact that production duties have been split between MJ (of Hookworms) and Rory Attwell (formerly of Test Icicles, now of Parlour and Warm Brains) only has us salivating more. The gobby, catchy chorus of lead single ‘Flowers’ looks likely to chuck a great big barrel of oil onto the smouldering anticipation surrounding them too – the line “I don’t even know your number and you don’t even know my name” is likely to soundtrack a hundred drunken dancefloor fumbles over the next couple of months.

It’s closing track ‘Klaus’ that shows they’re more than just a good-times mosh bomb awaiting detonation though. The appearance of a motorik beat is no surprise considering the title, but this is more Kraut-surf than Krautrock, occupying a channel you can imagine Crocodiles happily swimming in. Whereas most of their songs are cut sharply into bite-size chunks, this is like swallowing a six-foot eel – and it slips down a treat. With shows at Beacons Festival, The Great Escape and, appropriately, Tramlines having wowed the crowds recently, there’s no doubt that TRAAMS are on the right tracks. 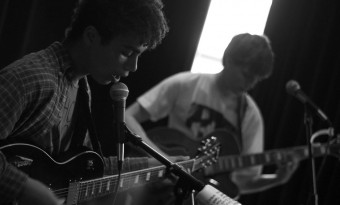