We loved the Specials-esque zombie skank of Misty’s Big Adventure‘s last single ‘Aggression’, and judging by the video to ‘The Bigger The Front’, they’re clearly still hell-bent on bringing a bit of sunshine to the grimmer aspects of Britain. This animated video sits somewhere between close-to-the-bone satirical cartoon Monkey Dust, a Studio Ghibli film and Yellow Submarine, and it’s difficult to think of a better recommendation than that.

It begins with a blue skinned bloke in a red jumper watching Misty’s frontman Grandmaster Gareth performing on an X-Factor style show, hosted by a siamese Ant and Dec. Yet when GG gets the red button from a garden gnome on the judging panel (Louis Walsh?), our armchair-dwelling hero puts in a call to the moon, and before you know it a blue monster has split Amanda Holden’s head open like a cartoon version of John Carpenter’s The Thing. Nice.

Musically recalling Gorky’s Zygotic Mynci at their chirpiest, the jaunt levels are turned up to 11 upon the monster’s appearance. After briefly stopping to remove a head from our siamese hosts, it grows to tower over the city with a grin that would be terrifying if it wasn’t radiating light and colour over the rooftops. Sunshine and a dead Dr. Fox might be distant dreams in December, but this is a Misty fantasy we can definitely get onboard with… 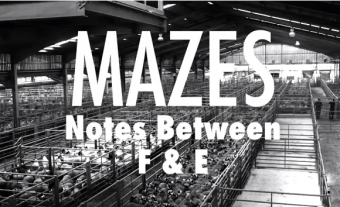 Manchester's Mazes take us to see some sped-up Zwartbles and Bluefaced Leicesters in their farm-friendly new film...
Read More