Chigago natives Oozing Wound‘s power riffed madness will take your face off. Right off. The three-piece have just released thier new album Whatever Forever and are returning to the UK as part of a wider European tour.

In honour of their hairy presence we asked Zack Weil (guitar and vocals) a few mid-tour questions about the band, the new album and how the tour is going.

Could you tell us a bit about how you all came together to form Oozing Wound?

The ooze has always been, we just figured out a spell that lured it into the open and we captured it before it had a chance to escape. This band is the culmination of dozens of other bands that came and went in the last ten years or so in Chicago. This band would have likely followed a similar fate had we not had a light shined on us.

Where did the name come from?

No one is certain, but it has been said to have been uttered by a witch right before she died.

You’ve just released your third album Whatever Forever, can you tell us a bit about its making? Did you have any specific ideas of how you wanted the album to turn out going into it?

We knew it was going to be weirder than the last two because that is where our riffs were taking us. We wrote ‘Weather Tamer’ first, right before our European tour in 2015. The writing of the rest of it kinda followed that path; nothing really fit together at first. Kyle (Reynolds, drums) told us he was quitting around September so we went into writing overdrive mode to give him a proper send off.

All the fast songs came last because I was tired of being compared to Slayer and didn’t really want to write anything like that. There was something about all the slow shit that just made sense to alternate it with some fast shit. It was a really organic process and I think it reveals itself when you let the album unfold. But what do I know?

You often get compared to thrash bands like Slayer. Does this attempt to pigeon hole your music make you angry?

We are on Thrill Jockey, metal purists don’t exactly care for this. The writers who get assigned our records are often bewildered or at a loss for comparison. What is a fast heavy band? SLAYER. Aways with the fucking Slayer. I would argue we have less in common with them than say Destruction or even Metallica. No one ever says High on Fire or Melvins, which are our actual influences.

Beyond that, we know that it means they didn’t really listen, Slayer does not write songs like ‘Mercury in Retrograde Virus’ or ‘Diver’, I just cannot for the life of me hear what the fuck people are hearing. I listen to the Beach Boys and Everly Brothers, I channel my energy through big riffs in a way I find pleasing. I honestly just wish that with a near 60 year history of metal, critics would have more to say than, “sounds like this.”

Why do you think reviewers are so keen to try to label your music in such a way?

Because it is easy and lazy and because how could you possibly describe in words what music sounds like without just saying it sounds like other things? Fans come up and say it sounds like Slayer, fine, it’s what you get…but writers, come the fuck on, you can dig a wee bit deeper.

If you had to create a label for your music what would it be?

‘Speed Space Metal’ made sense to us when we saw it written as a description for a show. ‘Power slop’. ‘Fucking garbage’? How about ‘rock’? We don’t really invest much into this. Fast and heavy sometimes, slow and heavy other times.

Did you feel any pressure to produce following the positive reviews that Earth Suck received?

Nah. We have all been in so many bands and writing songs for so long that the pressure is more about not repeating yourself than anything. We think that our songs are getting better, so as long as that continues I think we are good. If we start to suck, we will stop.

The artwork for Whatever Forever is awesome; can you tell us a bit about it? Is the decaying astronaut a reference to the cover of Retrash?

Kevin (Cribbin, bass) wants me to say no, but I think it is. Like a kind of summation of the Kyle years. Sam Nigrosh always gets what we are doing and has this intrinsic ability to get the right feeling for the cover art. He is a goddamn genius, go look at his shit!

Oozing Wound appears to be a band that doesn’t take itself too seriously. Is humour very important to you all?

I think we are consistently misunderstood. We don’t care about anything rock star related. Self important motherfuckers pretending they are artists and poets, it is rock n roll, get the fuck over yourselves.

Our humor is a response to that, the name of the band should be a signal to all wannabe writers and critics that your pretensions and sanctity of rock are absolutely being mocked, but the music itself is dead serious. The only jokes are the song titles, which are more for us at practice than anything else. Sorry we aren’t writing U2 songs or some shit. Go cry into your pillow with Arcade Fire and let us have fun without your insistence of seriousness. It is so fucking stupid.

There’s been so much upheaval around the world recently, what with Trump being elected President of the USA, the UK Brexit vote and a rise in right wing attitudes across Europe. Would you agree that at the moment, earth really does suck?

I wake up sad everyday and have to relearn through friends and art that it always sucks, but there are wisps of goodness if you care to look.

There are references to Rambo across your last two albums, are movies a big influence on your music?

I mean, it is mostly band lingo. I really love the first and last Rambo movies but the newest song ‘Rambo 5’ was just a fast and confusing riff until Kyle said it sounded like a ‘Rambo’, which meant it would make people go nuts mosh-wise. Then I just wrote more stuff I thought Rambo would say. Sorry, we aren’t that deep.

What are Oozing Wound’s favourite movies?

Just gimme the Paul Verhoven trinity of Total Recall, Robocop, and Starship Troopers; Waynes World 1 and 2; and Some Kind of Monster.

How has the European tour been so far?

Great, obviously. Europe kicks the States’ ass when it comes to enthusiasm and hospitality.

Have you had any highlights or favourite cities you’ve played in?

Paris, Porto and Barcelos have been amazing. We are huge fans of Portugal, kinda sad to be driving away from it at the moment. Good shit is ahead though!

What can UK audiences expect when you return to these shores?

What are Oozing Wound’s future plans?

Oozing Wound’s UK tour kicks off in Sheffield on 30 November, they play at The Windmill in Brixton (supported by the always excellent Luminous Bodies) on Saturday 3 December. Full UK tour dates below, do not miss them. 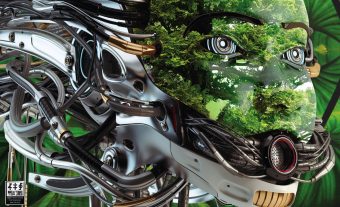