The words ‘dead’ and ‘untitle’ may, in a semantic sense, represent nothingness, a certain absence of detail. ‘Dead’ connotes the passing of life, thus of vitality, and the word ‘untitle’ suggests a lack of the definite, an uncertain vagueness. But on Australian noise-sludge duo DEAD’s new album UNTITLE, the two moribund words come together to mean anything but lifeless and incomplete. It’s a right bloody banger.

Melbourne-based DEAD comprises of Jem on drums and Jace on bass/vocals and they’ve just squeezed out their new album UNTITLE, which is planned to be the second part of a proposed four album cycle, playfully titled ‘The Trilogy’. Ha.

Clearly then DEAD are no strangers to humour and an oddball surrealism lurks throughout the abstract sludge that seeps through every pore of UNTITLE, collecting in a sticky pool about the listeners feet and rooting them helplessly to the spot. Released via Jem’s own label We Empty Rooms, UNTITLE will also be collected together with the other instalments of ‘The Trilogy’ once it’s complete. The first, Collective Fictions, was a split with Mark Deutrom of Melvins fame, and that choice of collaborator should give you a good hint of where DEAD are coming from.

UNTITLE opens with ‘Grizzly’, the sound equivalent of a wind chime hanging from a decimated tree that sits perched proud atop the horizon of a long lost desert. Jace’s crackling fireside whisper causes mystic brain terror as the burning flames form images which grope at the pitch black night sky. The track steadily takes its time to evolve into a bold clump of power-rock awesomeness, its subtlety slowly revealing itself as time unfolds, like burning embers. A carefully hushed, delicate bludgeon of a song.

The second track however, ‘Don’t Prey For Us’, is truly an evil, knuckle-dragging brute. Filled with spittle and barked bile, its muscular and controlled drumming lends the song a powerful directness that goes straight for the jugular. The song eventually swirls into a vortex of monastic voices, before a final battering rains down from the noise gods on high. It’s a belter of a track.

‘The Kid Was All Wrong (Vol.I, II, and III)’ features a hazily sandblasted, mellow riff that gently rolls over the dry arid hills created by the drums. Shards of splintered wood jut out from the burnished dirt as a strong breeze blows through the track revealing a ghostly chug which lurches straight into the sludgy bass intro of ‘Turning Screws’, a Melvins-powered pounder that hits the nail so hard on the head it punctures a crater deep into the earth’s core.

Underneath the bass and drums, fractured keyboard parts and electrical dings and tings, courtesy of BJ Morriszonkle, tickle at the ears, giving each song a blanket backing of patchwork noises that combine to create a sinister atmosphere, not unlike someone watching you from afar or staring at you through a murky smeared window. This eerie underbelly keeps UNTITLE on edge, creating a sense that there’s always some deep doom lying in wait just around the next corner.

At 11 minutes long, instrumental track ‘Masonry’ shows that DEAD don’t mind taking a riff and running with it. Throughout UNTITLE Jace takes a bass riff and stretches it to glorious, wonderful extremes, control and release, like someone threatening to ping you with an elastic band. The first seven or so minutes of ‘Masonry’ is akin to the sound of an army of bees gorging away at human flesh with little Philips-head screwdrivers. Possibly putting up some nice shelves or the like to hold all of their lovely mushy honey. Slowly the bees build a nice, tidy hive, covering the entire human body in bee-based D.I.Y regalia.

Like the imagined bee-I.Y. (guffaw) enthusiasts I’ve made up above, DEAD have, with UNTITLE, created a sludgy nugget of pure filth that is entirely engrossing.

As I say at the beginning of this here review, DEAD are unlike the adjective meaning of their name. This band isn’t wriggling off this mortal coil or growing cold any time soon. They are in fact more like the adverb for dead, like ‘this band is dead good, yeah’. Yeah?

Just give it a listen will you, you won’t regret it.

The Wytches - All Your Happy Life 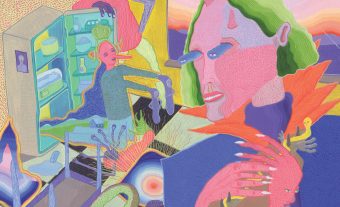 The Wytches expand on the grungy distortion of their 2014 debut Annabel Dream Reader with eleven songs steeped in creepy coastal cool...
Read More