Two different tracks from the soundtrack to Suicide Squad duke it out in this week’s singles column (with one clear loser), alongside new music from Francobollo, Katie Gately, Swet Shop Boys and more…

We premiered a brilliant video by burlap enigma Albert Bagman last year, so it’s good to know he’s got a new EP in the bag, so to speak. ‘Block Freak’ reiterates his knack for a meaty riff and manic vocal, while the off-kilter structure suggests a mad scientist’s bid to reanimate Jack White’s corpse gone pleasingly awry. Kier Wiater Carnihan

Terrible name and terrible artwork notwithstanding, AOSOON understand that their singer’s accessibly welcoming vocal doesn’t need too much going on around it, and in that sense ‘Good Enough’ is good enough. If they dropped down a key they’d probably ending up sounding exactly like The Twilight Sad. Nicholas Burman

Chelsey and the Noise – Edge Of Infinity

Never mind ‘Edge Of Infinity’, Chelsey and the Noise regularly teeter on the edge of being in tune, which adds some discordant intrigue to this increasingly malevolent exercise. The 808 cymbal crashes are what make it for me. KWC

At only 3:36, ‘Lost Illusions’ already sounds pretty epic. Half sung, gothic tinged spoken word meets with Faustian (as in the Krautrock band, not the pact-maker) monorhythm. How much you’ll enjoy this depends solely on how downbeat you feel when you press the play button. NB

London live favourites Francobollo finally have a debut album on the way, and ‘Kinky Lola’ promises plenty of treats in store. Opening with a yelp and some wobbly DeMarco-esque guitar, Simon Nilsson soon starts snarking out some lip-curling lyrics, calling out crybaby songwriters and “popstar wannabes straight from the ’80s”. I have a feeling the couplet “Hearing Kinky Lola from the loudspeakers / Drinking stinky cola in the house of God” stems from his stints doing the sound at a certain London music venue, although I’m intrigued to know who Kinky Lola is a cipher for. The rule for slagging off most of the music scene is that you have to be doing something better yourself, and by the time the track rockets into its spitting crescendo, Francobollo have proved they are. KWC

New Warp signing GAIKA has been making waves for a little while now, and the belting rhythm and horn stabs of ‘3D’ go some way to explaining why. Gaika’s contorted delivery remains his strongest asset though, and this track mainly makes me wonder what it’d sound like over a beat by The Bug. (Surely only a matter of time?) KWC

If the reviews for Suicide Squad weren’t bad enough, then this absolute turkey of a track from the fashion mags’ favourite cover star is the final thing to persuade me to keep my £8 and not hit the cinema this August. Seriously, this sounds like an unfinished filler tune from The Matrix soundtrack. If the future of movie soundtracks is to just get on-trend artists to make pop tunes for Spotify playlists then grab your Kubrick DVDs and hide. NB

I can’t deny that I turned my headphones up incrementally while listening to this. Hip-swinging in the most gurning way possible, even the novelty chipmunk vocals get a pass. NB

This might be my favourite track to come out on TriAngel for a while, and that’s saying something. An eerie take on electo-pop that finds itself almost beaten to death by some drunken trumpets just a minute in, only to fight them off and invite them into the fold instead. Completely chaotic without ever losing the plot, ‘Tuck’ is a tantalising taste of Katie Gately’s debut album, due in October. KWC

While in total agreement with Nick’s take on the Grimes track above, Kehlani’s contribution to the Suicide Squad soundtrack gets a pass, mainly thanks to her delicate, breathy vocals on the chorus and some fairly restrained production (in comparison to Grimes anyway). KWC

Show Me The Body – New Language

A strange party of skater/slacker rock, shouty rap and underground, fuzzy rock. Show Me The Body are the musical equivalent of a venn diagram of genres people like if they smoke too much weed. The fuzzy, earache-inducing element is up my street, but the rest reminds me of the crap parts of being an early-teen. NB

Riz MC is dominating TV currently with his striking performance as Nasir in HBO’s The Night Of. As part of the return of the Swet Shop Boys duo he, erm, unfortunately comes second. Although being beaten by one of New York’s quickest witted – former Das Racist MC Heems – is a punch worth rolling with. The most surprising thing about T5 is that the once melodica-wielding Redinho has dropped the ’80s cheese and here delivers a punchy beat reminiscent of MIA and Diplo’s collaborations. NB 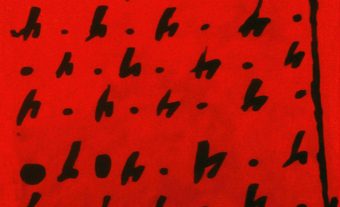 Apocalypse times call for 'Apocalypse Times', the twisting new track by psychedelic trio Teenage Ghosts and one of the highlights of this week's singles...
Read More