From a hallucinating Mr Jukes to a pair of snogging bellies, here are the eleven best/weirdest music videos we’ve been subjected to over the last couple of months…

I thought it’d be a good idea to start this edition of MPEGs XI with a video that will make you feel so much simulator sickness that you may be rendered incapable of watching the other ten selections. If you can withstand the nausea, however, you’ll be rewarded with a video that demonstrates enough technical skill to match Clark’s always crucial music. Probably best not to watch it when you’re blotto, unless you want to be scrubbing a mixture of bile and Newcastle Brown out of the carpet shortly afterwards.

Fair to say this Fat Goth effort didn’t require quite the technological mastery as the video above it, but that’s part of its charm. It’s also nice to finally see a band not scared to deliver harsh truths about the effect of a declining fishing industry on British seabird populations.

From the ridiculous to the sublime. Corey Scott-Gilbert provides the absolute definition of freaky dancing, making the most out of Jlin’s clinical, reverberant rhythms.

I once saw Juana Molina while high on acid, and was convinced she was a witch. Not in a scary way, but she definitely seemed to have some sort of connection to a mystical force beyond everyday comprehension. The video for ‘Paraguaya’ does nothing to rid me of that impression. Enchanting stuff from Argentina’s finest.

The stunning cinematography of ‘Throwing Lines’ would be enough to earn its inclusion on this list, but the post-modern presentation of it being sent to Kelly Lee Owens on spec by two Norwegian fans makes it even better. Unless it actually was. Which would make it even better still.

Never before has so much time and money been spent turning a meandering post-coital conversation about war, aliens, dinosaurs and vegetarianism into a music video. And damn it was worth it. Stars John C. Reilly as God, in case you needed any more convincing.

Directed by Sam Bailey, who plays bass in Marika Hackman’s touring buddies Francobollo, this is a frisky tale of love, lust, fencing and, er, bellies with tongues. A more accurate depiction of upper class life than you’d get in a Jilly Cooper novel, one imagines.

Mr Jukes makes it two MPEGs XI appearances for 2017 with another animated delight. Not dissimilar to last year’s excellent video for ‘Subways’ by The Avalanches, this creation sees a clearly hallucinating Mr Jukes and Charles Bradley taking a surreal trip through town…

Described as a “music video game”, this is the sort of thing you hope we’ll see more of as directors really start to take advantage of the options offered by internet media. Essentially a counter-cultural version of a Choose Your Own Adventure book, you take responsibility for a quintessential sixties drop-out as he faces a series of difficult choices against a backdrop of drugs, protest and Vietnam. It’s probably best experienced through this dedicated site, where you can explore the options more easily…

This meta-video starts off concerning someone threatening to leap off a building, but the biggest impact is an unexpected crash through the fourth wall. I’ve already said too much. Sorry.

***
Wesley Gonzalez – I Am A Telescope

As someone who spent a disproportionate amount of my childhood waiting for my dad to put his bets on in bookies, I find Wesley Gonzalez’s video for ‘I Am A Telescope’ oddly nostalgic. It may not be the most glamorous setting but Gonzalez manages to turn it into his own personal three-minute Las Vegas residency. He also wrote a brief description of the experience, which is more than most musicians bother to do in their press releases, so I’ll leave the final words to him:

“This new video for I Am A Telescope was filmed at 8am on a bleak day in Brockley at the Betting shop, one of the oldest bookies in the area, there were still built in ashtrays on the tables and fag burns in the seats. Betting shops are interesting places, it’s like there isn’t a outside world when you are in there. The shoot ended with a Rasta bloke asking to buy my Synthesizer for £20 I declined the offer but can’t blame a dude for trying, maybe I would’ve accepted the offer if he hadn’t called it a piano? If I look ill or in a bad way for any reason let it be known that it’s because I did my own makeup.” 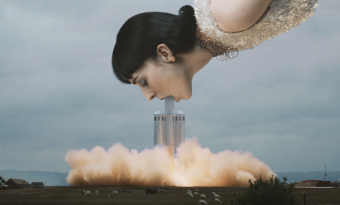 From the titillating sleaziness of Tommy Cash to the monochrome oddities of Mary Ocher, set your square eyes on eleven of last month's finest music videos...
Read More