Apocalypse times call for ‘Apocalypse Times’, the new track by psychedelic trio Teenage Ghosts, which lines up alongside the likes of Airbird, Warpaint and serpentwithfeet this week…

Any fans of Talabot and Pional’s collaborations will like the drifting vocals, wide eyed synths and stuttering snare claps in this. Nicholas Burman

After the blissful ambience of Benoit Pioulard’s last album, one of our favourites from last year, ‘Layette’ would appear to herald a return to more song-based compositions. Hopefully they’ll all be as beautifully produced as this, hazily textured in a style reminiscent of Hush Arbors at his most tuneful. Kier Wiater Carnihan

Beyond The Wizards Sleeve – Door To Tomorrow

Erol Alkan and Richard Norris’ recent album as Beyond The Wizards Sleeve is pretty hit and miss, but the string-laden ‘Door To Tomorrow’ is one of the hits, and a welcome reminder of Euros Childs’ ability to lift a track with his lilting vocals. KWC

It’s refreshing that we seem to be in a period of time where not having everything in-your-face is acceptable. The drunken lean of the beat on this is quite catchy, although swerve paying any attention to the verse’s lyrics. Despite her vocals being of the could-be-anyone variety, this isn’t terrible. NB

I’ve always found Daughter’s music deathly boring, so kudos to them for trying to inject a bit of intensity with the percussion-heavy ‘No Care’. Elena Tonra’s cadence and lyrics are impressively visceral too, and while the tune isn’t quite strong enough to convert me, it’s a welcome change of direction. KWC

A member of Sweden’s Studio Barnhus group, while I don’t usually have a lot of time for his accomplice Axel Boman’s output, Kovács’ goofy house style sounds like a lot of fun, edging just enough into cheese for my feet to wish they were dancing in warmer climates. NB

Papi & Youngs Teflon – Look At Me

The beat on this is so spaced-out I almost drifted off – in a good way. The bars may be pure London but those synths are drifting in from somewhere beyond Jupiter… KWC

Roger Goula – Something About Silence

A friend of mine had the privilege of doing the sound for one of Roger Goula’s recent gigs, and was blown away by his lush string arrangements. Listening to ‘Something About Silence’, it’s not hard to hear why. The real delights are in the details though; specifically the creaking, skittering background noise that adds a delicate undercurrent of tension. KWC

He has an impressive voice and the uplifting arrangement (courtesy of The Haxan Cloak) makes this sound like an old Motown backing track being siphoned through an Arca outro. If he could go easy on the acrobatics and trim the very unnecessary fat which pushes this towards the seven minute mark, the result would be more effective. NB

If you’ve written a track called ‘Apocalypse Times’, now would seem like a fitting moment to release it. Although if you’ve written a track as good as Teenage Ghosts’ new offering, any time would be a good time to release it. This gently distorted drone stew will fill every square millimetre of your eardrums until loose bits of snare and bass start spewing out of your nostrils, while the breathy vocals gently mop up the mess. A real beauty amidst the maelstrom, which leaves me looking forward to Teenage Ghosts’ imminent new Revelations EP… KWC

Alt-J’s second album was disappointingly free of the more interesting quirks evident on their debut. Perhaps drummer Thom Sonny Green was hoarding them all for his solo project? That would certainly appear to be the case judging by ‘Phoenix’, which sounds a little like ‘Love’ from Mica Levi’s score for Under The Skin, if it had been directed by Nicolas Winding Refn. Combined with the more recently released ‘Preach’, it makes Green’s forthcoming High Anxiety album sound a lot more appealing than the last record he was involved with. KWC

Took me until seeing them put on a storming set at Primavera a couple of years ago to get my head around the appeal of Warpaint. Though I rarely go to put them on the stereo they always sound refreshing when they eventually make an appearance. ‘New Song’ is the all-out-pop track they’ve been aching to make since ‘Elephants’, and anyone who thinks the bass line to ‘Disco//Very’ wasn’t catchy just wasn’t listening hard enough. Not sure this is much more than a good way for them to get some radio rotation, but it’s sounding good while it’s still fresh. NB 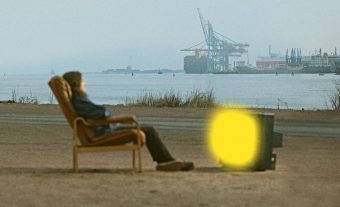 Our round-up of last month's best EPs sees Sweden's sir Was saying hi, clipping getting a wriggle on and Circuit Des Yeux searching for her alter-ego Jackie Lynn...
Read More