Our round-up of last month’s best music videos brings us drugs from Formation, pus from Francobollo, Nazi puppetry from Jaga Jazzist and a dildo-wielding Barbie from The Big Moon. Sounds like a party!

In which representatives at a UN summit start throwing El-P and Killer Mike lyrics (and a few punches) at each other, and the result still seems more civilised than your average edition of PMQs.

Apparently shot in an ice factory in a Thai jungle – a pretty unique setting for a music video by anyone’s standards – director Ben Reed’s monochrome footage makes for an otherworldly experience both graceful and disorientating.

Believe it or not, the above statement is actually true. Well, assuming you’re after the song ‘Drugs’ by Formation, rather than some illicit chemicals. The video is interactive, meaning you can click through a series of short, grainy clips that each complement the track’s gritty bass riff. My favourite is the looping canary, but there are plenty to choose from (several involving, yes, drugs).

Francobollo were in explosive form performing at the single launch for ‘Kinky Lola’ last night. Not quite as explosive as the life model in the video though, although the pustular chaos only seems to inspire those around him even more. Joyous, unique and slightly sticky – a bit like the gig last night actually…

Jaga Jazzist’s music is famous for flowing down many a weaving avenue, but even that can’t compete with the amount of twists in the video for ‘Prungen’. I’d be lying if I said I knew exactly what was going on at any point, but it’s beautifully put together with some fantastic puppetry (and a few Nazis).

I think ‘Russians’ makes Liima the first band to appear in MPEGs Eleven twice, although this is a very different creation to their video for ‘Roger Waters’. A mini-documentary about the controversial boycott of the 1980 Moscow Olympics, it focuses on West German javelin thrower Michael Wessing, who was robbed of a likely gold medal by geopolitical posturing he could do nothing about. It’s a timely reminder that sport and politics rarely make good bedfellows, a lesson the Brazilian government sadly ignored at the recent Rio games.

Some gorgeous animation by Carine Khalife makes this Makeunder video shine. The thick brush strokes that form the knotted snarl of her ‘Great Headless Blank’ figure also manages to uncannily resemble my own mind on a Monday morning…

Director Marion Dupas shows how fashion really can kill, by having the star of ‘Fashion Killa’ sport a weave so long you could strangle several people with it and still have plenty left over. Luckily all she wants to do with it is tie up the random semi-naked man who just happens to be hanging out in her local beauty shop…

Most lo-fi, day-in-the-life style videos are deadly boring, but Slow Club’s ‘In Waves’ contains just the right dose of easy, candid humour to make it charming. Rebecca Taylor’s forehead-strapped go-pro captures everything from aborted sea-swimming attempts to Google searches for “does Victoria Beckham have colonics?”

If Robert Crumb had directed a short called ‘Yellow Sub(way)marine’ for Sesame Street, it might have turned out something like this. Disco bunnies, decapitated bananas and havoc-wreaking daisies abound.

In this modern-day adventure of Mattel’s most famous female figurine, Barbie operates on a dog, gets cheated on, gets onto Tinder and finally gets lairy at a Big Moon gig. Oh yeah, and there’s a brief encounter with an instrument of self-love that I’m not sure is an official Barbie accessory… 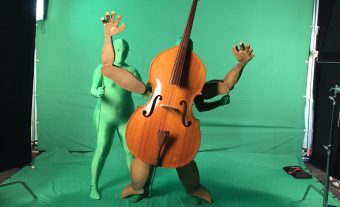 Our compilation of July's best music videos features Kari Faux, MLiR, God, Satan, a bunch of murderous bowling pins and a woman making out with a pig...
Read More