As teased by Baba Yaga’s Hut chief Anthony Chalmers in last year’s preview, the awesome Raw Power festival will return to North London on 22/23/24 May for another weekend of ferocious psychedelic noise goodness. Hosted at Tufnell Park’s intimate The Dome and Boston Arms Music Rooms, last year’s festival was an absolute beast. I’ve probably only just recovered from its spaced-out wig-ness now.

It really was glorious.

This year the fine people at Baba Yaga’s have put on an equally good spread. Its delicious line-up would make even the most vacuum-hearted music-bastard drop to their steel knees in tearful praise, and blow kisses to the various rock deities that have blessed us with this glorious happening.

Well, maybe not but they’ll certainly inwardly whisper a quiet thank you. The soppy gits.

Carefully scheduled over the course of the weekend, this year’s line-up has some tasty standouts. Here’s a few cheeky recommendations for you to ponder and chew over…

On the Friday there’s a triptych of rock fun, with Luminous Bodies kicking things off with a solid boot to the bits. Insane abstract noise devils Gnod are the filling of the Friday sandwich, topped of by a lovely slice of Gallon Drunk [who featured in our recent Camel Mix – Ed]. Chomp it down to line your stomach, ready for a weekend that looks full on quality.

There are a fuck-ton of great bands throughout the Saturday and I’m looking forward to seeing the delightfully named Pigs Pigs Pigs Pigs Pigs Pigs Pigs. They’re fucking great, so get down for a bit of an early afternoon doom punch. I bloody love the The Wharves too, and having seen them live recently I can tell you they will be excellent. You’d be a fool to miss them.

I’m also really looking forward to seeing Sloath for the first time, their sludgy Deep Mountain (out now on Riot Season) is bloody immense, so they promise to crush minds like small crushable things under the clumsy cloven hoof of a drunken bison. Good Throb then bring their confrontational post-punk and should be bloody chaos live.

Built from members of Part Chimp, Dethscalator and Mugstar, Sex Swing are a positively grubby noise supergroup and their sax-mangled, electronic noise rock will burst what’s left of your mind. The evening should be rounded off in epic full jam style by California’s Earthless. As if all the other bands weren’t enough for you, greedy-guts.

The Sunday line-up shows little sign of letting up, with the likes of Blown Out rubbing psychedelic, mind-exploring shoulders with Cosmic Dead and Circle. There’s also the return to Raw Power of the mighty Hey Colossus, who for me stole last year’s festival. They’re coming off the back of their most critically acclaimed album, the brilliant In Black and Gold, and are not to be missed for anything. Not nothing all right! They will be class.

Then there’s Makoto Kawabata & KK Null, which should prove very interesting indeed. The Acid Mother’s Temple guitarist’s set with obscure electronic noise mutant KK Null should make for a proper full on wig-out. Time may very well fold in on itself. I’m not sure. Either way the next day’s a bank holiday so whatever.

You can still get separate day tickets (if that’s how you choose to roll) with tickets for Friday at a very reasonable (i.e. mega cheap) £12.50, and full weekend tickets a measly £50.

Think of how much you’d pay to go and watch Kanye West being a knob on stage at Glastonbury whilst you stand knee deep in shit in a muddy field. Then invest that money more wisely in a ticket to Raw Power, that’ll leave you plenty of change for a few pints and a cheeky bit of merch; and whilst you’re at the bar I’ll have one too. Spread the savings yeah? 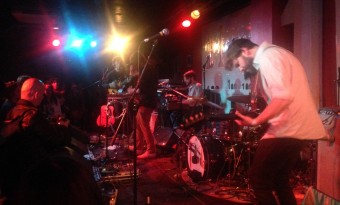