With 2016’s Raw Power Festival soon upon us, we bring you the final instalment of our three-part preview interviews. But hey, dry those eyes my friend, it may be the final instalment but it’s at least killed a few days, edging us closer to the weekender and the brain-melting levels of excellence I mentioned in part one.

To round things off nicely we chat to legendary noise-bastards Part Chimp, who are one of the loudest and most revered heavy bands you could hope to come across. Ask anyone who has a vague interest in the noisier underside of music about Part Chimp and they will, rightly so, gush liberally about the punky sludge of Chart Pimp and I am Come, or the world-ending enormity of Thriller.

Their skull-crushingly volumous live shows are a sight and sound to behold. Those in attendance at their recent show at The Crypt in Camberwell will tell you how absolutely important it is to not miss seeing Part Chimp live [I was there, and I concur – Ed]. To say they were immense that night is an understatement wrapped in flaming dog-shit. Simply put, they are worth chewing your own legs off for a chance to see. Luckily for you, you don’t have to as Baba Yaga’s Hut have persuaded them to headline this year’s festival.

I asked the band – Tim Cedar (guitar, vocals), Jon Hamilton (drums), Iain Hinchliffe (guitar) and Joe McLaughlin (bass) – a few questions about their music, their recent return and what the future holds.

What drew you all together to form Part Chimp? What were the main influences?

Tim: Me and Jon were doing this band called Ligament and Ray the bass player decided to quit. We had a tour booked so we needed a bass player. We thought, ‘let’s get Nick [Prior] because Scarfo have finished and he likes us right?’ So that happened and then we started writing some new songs that didn’t really sound like Ligament anymore and we were digging its heavier vibe, so we killed Ligament and Part Chimp was born.

But it needed thickening up like a stew. So Iain joined our stew. Influences for the band are a bit of a mishmash. Classic rock mixed with noise. We share a common love of comics, sci-fi and film, which is just as influential to our sound as the music we listen to.

After twelve years and three studio albums, Part Chimp went on hiatus in 2012. What caused the break?

Tim: Twelve years of Part Chimp. Nothing seemed to be happening. I think we were getting a bit bored and it was reflected in the songs we were attempting to write. It all became a little bit too complicated and just didn’t feel right. The best thing about playing in Part Chimp is that it’s comfortable and that’s when it sounds right. It’s like shoes. It feels good to put on your beaten up old desert boots after trying to break in a pair of shoes that you’re not sure why you bought in the first place.

Jon: The original idea was to break up properly, but in typically shambolic fashion we accidentally went on hiatus instead. I can’t remember what the reason was.

During the break, Part Chimp’s reputation grew and grew. What’s it like now being considered as ‘elder statesmen’ or legends of the noise rock scene?

Iain: A noise rock pension scheme or a carriage clock would be nice. Something to fall back on.

Tim: I didn’t know that. If we’re elder statesmen, does that mean we can have a private club on Piccadilly? We don’t get treated like elder statesmen. I shall have to amend our rider to include pipe tobacco and fine port.

What were you all up to during the break?

Jon: Three quarters of the band (including me) got married; I made several albums of synth music.

Tim: I played drums for Hey Colossus for a couple of years and we did an album and then I joined a band called Sex Swing [who have also been added to this year’s Raw Power line-up].

Iain: I met my wife. I don’t think she saw us play until after we got married.

Why did you get back together?

Tim: I think we realised it was quite boring not doing it. The break, and playing with a bunch of other weirdos, really helped loosen me up. Before, songwriting had become a bit forced. I began writing tunes that felt more naturally ‘Chimpy’. I think we all missed playing live too. It’s not something we did a huge amount of compared to most bands. We all have jobs, playing shows is what we loved doing and I think we missed that part of it the most.

Iain: Same as Tim really. It was also nice to get back together without any pressure or need to rehearse for a show or anything.

How did it feel playing together for the first time after a few years apart, was it like putting on a nice old pair of brightly coloured trousers?

Tim: More like a nice pair of old Green Flash. They smell pretty bad, but they feel pretty good. But enough with the shoes now.

Jon: Nice to realise the songs weren’t that hard to play.

A huge part of a Part Chimp gig is just how loud you are. I remember seeing you at Corsica Studios in 2009 and it was the only gig where I thought I’d actually gone deaf, it was so loud. It was as if I’d been punched in the face with a hand made of tinnitus. How did this huge level of amplification become part of the sound?

Tim: Drums are loud. Amps are loud. I don’t know if we are much louder than other bands. Sounds good to me. The amps we use only sound good when they are turned up. And that’s when you start to feel the correct reaction between guitar and speaker.

We kind of have a setting that never changes and works for us when we practice and when we write. It’s weird, but I can only sing when my vocals feel submerged in the sound. Even in my head.

Live is different but we aren’t going to change our settings as that will change the sound and the way we play. Some rooms sound louder than others too. I feel sorry for the (many) poor bastards that have seen us in near empty rooms where there’s nothing to soak up the sound and the sound engineer has been told politely to “fuck off” when they’ve asked us to turn down. All ear damage sucks, especially tinnitus. You’d have to be pretty nuts to go and see any band without earplugs in, especially us!

Oh yeah, and there’s the fact that when we started playing as a three-piece, Iain and I started playing through bass amps as well as our regular amps. And that sort of stuck.

As well as ear-bursting loudness, what can newcomers to Part Chimp’s live show expect at this year’s Raw Power Festival?

Tim: Apart from the spectacle of a middle-aged man screaming his head off in front of three other sweaty dudes? A selection of golden mouldies from the back catalogue and a bunch of new tunes from our upcoming record, which will never have been performed live before! Apart from in Manchester the night before.

I’m not sure we can do more than that, but we’ll give it a go. Maybe get some dancers in. Light show?

Jon: If you’ve seen us before, there’ll be some new songs probably… maybe a couple of guest appearances. If you’re a newcomer, I’m guessing you’ll just think it’s very loud!

This year’s Raw Power Festival has a very diverse line up, who are you looking forward to seeing?

Iain: We’re going to miss everything on the Saturday, as we’ll be up in Manchester. Hopefully though, if things work out I’d like to see Mugstar and Taman Shud, and I’m up for giving some of the names I’ve not heard before a try.

Jon: Sorry, I don’t follow modern music, so I don’t know most of the bands. We’re old remember? I’m sure I know some of the people in some of them though.

I saw you at the Camberwell Crypt recently and it was amazing, do you have a favourite past Part Chimp gig?

Jon: We played at a squatted building in Den Haag once. The room we played in was like a large cupboard and the audience were incredibly loud.

Tim: The Crypt shows are always fun. It’s always nice to play with your mates in your local.

Our first show with Joe playing bass at ATP, it was great to have him there and know that it was working.

Iain: There are ones that I remember for the nice venue, or city, but my favourites are always the ones that feel right when we’re onstage. The Crypt, for some reason, always feels good to play. I love it when we make it up to Scotland as well.

The Raw Power Festivals of the past few years have had a great communal vibe, with audience and bands mingling together. What do you think of the current ‘underground’ scene, does one exist at all?

Tim: I liked it when it was all fanzines and flyers and tape-swapping. I don’t know about today’s underground scene. It used to be really hard to find gigs and music by so-called ‘underground bands’ because you had to actually go to the gigs and buy the fanzine and get the flyer, etc., etc. Now, 50 shit bands have already told me they have a gig/record/video and it’s not even lunchtime. I’ve played and mingled at the last few Raw Powers and it was very nice.

Tim also records and produces other bands at the highly regarded Drop Out studio. Are there any records which you’re particularly proud to have been involved in?

Tim: I did a live recording of Bardo Pond recently, which was great. But as for records, it’s been nice to do the last three Hey Colossus records. I think Radio Static High sounds pretty good for a record that was recorded in a day. Took a fair while to mix though.

As Raw Power Festival is named after a legendary Iggy & The Stooges album, which Stooges song would you pick to best represent Part Chimp?

Jon: Probably ‘You Don’t Want My Name’ from their 1971 tour recordings because it sounds horrific and you can’t hear the vocals.

What are Part Chimp’s plans for the future?

Jon: Drive flying cars. Play a gig on the sun.

Part Chimp headline the final day of Raw Power Festival at The Dome, Sunday 29 May. You’d honestly be a fool to miss them. So don’t.

As well as the three bands interviewed in our short previews, Raw Power boasts more great bands than a hairband factory that exclusively makes their bands from solid gold and Lemmy-approved leather. Get your tickets for the weekend now, you will not regret it. Buy and prepare yourself for full perception-dissolving destruction, in the best possible way. 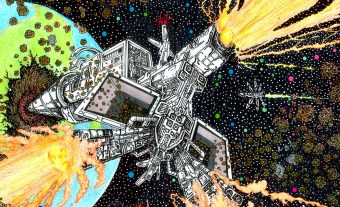 Our Raw Power preview continues with doom trio Slabdragger, who extol the pleasures of DIY and explain the sci-fi origins of their latest album...
Read More