When Alex Zhang Hungtai, aka Dirty Beaches, found his third album ‘Badlands’ (2011) breaking through into the guaranteed sales Mecca that is Pitchfork approval, he also attracted the requisite side dish of low-level snark that goes with the territory. Who was this guy, with his slick-backed hair, vintage mics and Rumblefish leathers? How dare he play distorted rock and roll while striking such a considered affectation of supposed authenticity? Out, you heathen poser, out!

However, it turned out that not only had Hungtai been doing this shit for quite a while before anyone really noticed, it also came from somewhere far more personal than a superficial glance might indicate. His studied 1950s schtick (and it was very much intentional schtick) was inspired by old photographs Hungtai found of his Dad (a couple of which ended up adorning his 7″ covers). It was a way of making a connection in a distant relationship, with Hungtai pontificating to Time Out about how “father figures from that generation, you know, it’s almost impossible for them to express any kind of intimacy with you through words”. Perhaps he felt music could foster the bonds that language sometimes can’t.

His follow-up album also has its genesis in deeply personal matters, namely the end of a four-year relationship. Originally intended to be released as two separate albums, Huntai’s label convinced him to double them up, perhaps mindful that while the twisted drum-machine rock of ‘Drifters’ would still appeal to ‘Badlands’ fans, the more challenging and largely instrumental ‘Love is the Devil’ might prove a tougher sell.

As it is, the two complement each other fairly well. ‘Drifters’ was partially recorded in Canada and finished off in his friend (and Brian Jonestown Massacre founder) Anton Newcombe’s studio in Berlin, and exhibits the nervous energy of someone still very much in ‘band mode’. ‘Love is the Devil’ meanwhile was recorded entirely in Berlin after the ‘Drifters’ sessions, and is a more reflective and rather sad work,like coming down off a drug that wasn’t that much fun to take in the first place.

When the latter’s title track was uploaded to Youtube it elicited a somewhat bemused response from fans, and Hungtai couldn’t help but respond with an explosion of emotional vitriol that only indicated just how much these songs meant to him: “i don’t care about pleasing your expectations… I was crying my fucking eyes out when i wrote this and punching myself in the face”. As he’d told Pitchfork, in comparison to the character study of ‘Badlands’ these albums were “me from the core, based on the last two years of my life.”

The Youtube commenters that suffered his wrath will probably be placated somewhat by the ‘Drifters’ portion. Opening track ‘Night Walk’ is a sour slice of suicide disco in a similar style to recent Odonis Odonis single ‘Better’, while Hungtai’s vocals on ‘I Dream in Neon’ skulk through the depths like a sturgeon in a distressed leather jacket, with only occasional synth tones puncturing the murk.

There’s about as much sunlight here as there is in Wrexham between Spetember and July. The gritty funk strut of ‘Casino Lisboa’ makes you want to grow a grizzled beard and stomp down dodgy streets in over-sized boots, wearing sunglasses you’ve just snatched off someone’s face. ‘ELLI’ is a little sweeter, roosting on Group Rhoda’s frosty electro-pop branch and sounding a little like the theme tune to an obscure kids TV show, although admittedly one devised by David Lynch.

From thereon things only get weirder. ‘Aurevoir Mon Visage’ has Hungtai rambling over a bubbling tribal rhythm like a disorientated witch doctor in a deserted alleyway, while ‘Mirage Hall’ is creepy, queasy and discordant (if somewhat overlong), starting off like the soundtrack to a film somewhere between Suspiria and Assault on Precinct 13, and finishing with Hungtai doing his best Alan Vega impression over a twangy techno beat. The final ‘Drifters’ track, ‘Landscapes In The Mist’, is perhaps the most moving – a cold, ambient paddle through misty waters, with a distant saxophone leading the way.

‘Love is the Devil’ largely continues in this vein. ‘Greyhound at Night’ is a puddle of noir-ish jazz, ‘This Is Not My City’ is damp with the slow-motion tears of a crying piano, and ‘Woman’ is akin to a BBC Radiophonic Workshop piece that somehow manages to sound like it predates Delia Derbyshire and the gang. There’s a similar lost, dusty atmosphere here that made L. Pierre’s recent ‘The Island Come True’ album so appealing.

‘Alone at the Danube River’ sums up the second side nicely; an impressionistic guitar solo sliding over chords that lurch sadly, like a dinghy that’s been tied to an abandoned jetty for several years. The overbearing misery can get a bit much though, with ‘Like the Ocean We Part’ too weighed down with drudgery to be particularly listenable. It’s the only ‘Love is the Devil’ track that features Hungtai singing, but he eschews the lonesome croon that made previous singles like ‘Lord Knows Best’ so beautiful in favour of a badly-held stumble that goes nowhere. In fact, the vocals are almost entirely unintelligible on ‘Drifters’ too, perhaps a result of Hungtai’s insistence that “I suck at writing lyrics”.

Ghostpoet - Some Say I So I Say Light 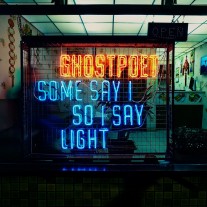 Ghostpoet generally bristles when he's described as a rapper, and with good reason. While it would be ludicrous to ignore the influence of hip-hop, his sound sucks in influences from a far wider spectrum of sources. On 'Cash and Carry Me Home', the standout track from his Mercury-nominated debut 'Peanut Butter Blues & Melancholy Jam', he didn't so much rap as slur over a pumping 4/4 beat, like someone trying to find their way out of a club after one too many JD & Cokes. Similarly, tracks like 'Liiines' were as much anthemic indie as anything else. His new album, which is the recipient of a rich layer of studio lacquer in comparison to the "shitty home production" of his debut, makes him even harder to categorise. There are barely any hip-hop beats here, but you can hear everything from Joy Division to Burial across its 11 tracks, which display an attention to detail that indicates many red-eyed nights behind a mixing desk, tweaking tracks and tweaking out. 'Cold Win' is a strong opener, a gloomy strut of android two-step which sounds way too futuristic to actually be about the mundanity of working in a chicken shop, while 'Them Waters' is similarly moody. Roots Manuva comparisons have always dogged Ghostpoet, and there are definite echoes of Lord Gosh's darker work on 'Awfully Deep' here, although Ghostpoet is more the tense anxiety that precedes a breakdown rather than the drug-damaged depression that follows it, with the admittance that: "If I stop to think, it may open floodgates that no key can ever lock”. While those gates thankfully appear to have remained closed, the ones in front of the studio were clearly wide open, judging by the stream of guests who've poured through them. Lucy Rose exchanges some melancholy vocals on the delicate 'Dial Tones', while legendary Afrobeat drummer Tony Allen contributes a jazzy rhythm to 'Plastic Bag Brain', a track which, although fairly tasty, does sound a bit out of place here, almost like an Alt-J take on highlife. Lead single 'Meltdown' also features Monitors favourite Woodpecker Wooliams, who adds a heartbroken resignation to a song about a disintegrating relationship. It's the less radio-friendly moments which are really interesting though. 'Thymethymethyme' has a time signature even weirder than it's title (it feels like eleven-ish beats to the bar, which is mental). Ghostpoet's wordplay is generally more about space and atmosphere than devastating delivery, but managing to keep a flow over this rhythm is a testament to his talent. Lyrically it's another doomed relationship scenario, although Ghostpoet's tangential lyrical style means it also ends up covering the stresses caused by expensive London rents. 'Sloth Trot' is apparently his "attempt at experimental, psychedelic rock", although it sounds more like Boards of Canada remixing Radiohead's 'Pyramid Song'; a languid nod-out track where even the odd bit of jerky discordant guitar manages to sound utterly chilled. The similarly slow-paced 'Dorsal Morsel' comes close to stagnation, but even here a sudden electronic arpeggiation sets it ticking along with the smooth accuracy of a bloody expensive watch. Piano takes centre-stage on a couple of the album's best tracks. A fantastically doom-laden ivory riff sparks off the brilliant 'Msi Musmid', with references to Skodas and dim sum (read the title backwards) highlighting Ghostpoet's refusal to abandon everyday concerns ("If I try put on a facade or an alter-ego, I’ve got to keep that up for five, ten years - I don’t want to do that!" is how he put it in a recent interview). It finishes with a digital cacophony that sounds like everyone's internet connections jamming at once, before the gentle piano hook of '12 Deaf', which also features sweetly soft vocals from The Invisible's Dave Okumu, takes things down a notch. Closing track 'Comatose' sums up all that's excellent about this album. Just as you think it's about to float away like dust caught in a beam of sunlight, a wonderfully manic electronic rhythm bursts in with a string quartet, bringing things to a glorious conclusion. In keeping with the general mood it's also pretty dark, featuring not only hints at suicide but also the most memorable verse on the album: "The sip tastes sweet so I have a whole glass A few days pass and I've had a vineyard Think I've got a problem but the mirror says 'no' And the wallet says 'yes' - more drinks I guess" Asked to put the record in a nutshell, Ghostpoet responded: "It’s a chance for me to mumble over quirky sounds". It's something of a humblebrag but it's also bluntly accurate in terms of the specific niche he inhabits. His Twitter account, as well as providing informative dispatches on the conversational habits of East London cabbies, often functions as a sounding board for him and his followers to exchange music tips, while his NTS radio show demonstrates a roving taste. It's this obvious love of music that permeates 'Some Say I So I Say Light' and makes it such an attractive proposition to fellow enthusiasts. Mumbling quirkiness never sounded so good.
Read More