Ghostpoet generally bristles when he’s described as a rapper, and with good reason. While it would be ludicrous to ignore the influence of hip-hop, his sound sucks in influences from a far wider spectrum of sources. On ‘Cash and Carry Me Home’, the standout track from his Mercury-nominated debut ‘Peanut Butter Blues & Melancholy Jam’, he didn’t so much rap as slur over a pumping 4/4 beat, like someone trying to find their way out of a club after one too many JD & Cokes. Similarly, tracks like ‘Liiines’ were as much anthemic indie as anything else.

His new album, which is the recipient of a rich layer of studio lacquer in comparison to the “shitty home production” of his debut, makes him even harder to categorise. There are barely any hip-hop beats here, but you can hear everything from Joy Division to Burial across its 11 tracks, which display an attention to detail that indicates many red-eyed nights behind a mixing desk, tweaking tracks and tweaking out.

‘Cold Win’ is a strong opener, a gloomy strut of android two-step which sounds way too futuristic to actually be about the mundanity of working in a chicken shop, while ‘Them Waters’ is similarly moody. Roots Manuva comparisons have always dogged Ghostpoet, and there are definite echoes of Lord Gosh’s darker work on ‘Awfully Deep’ here, although Ghostpoet is more the tense anxiety that precedes a breakdown rather than the drug-damaged depression that follows it, with the admittance that: “If I stop to think, it may open floodgates that no key can ever lock”.

While those gates thankfully appear to have remained closed, the ones in front of the studio were clearly wide open, judging by the stream of guests who’ve poured through them. Lucy Rose exchanges some melancholy vocals on the delicate ‘Dial Tones’, while legendary Afrobeat drummer Tony Allen contributes a jazzy rhythm to ‘Plastic Bag Brain’, a track which, although fairly tasty, does sound a bit out of place here, almost like an Alt-J take on highlife. Lead single ‘Meltdown’ also features Monitors favourite Woodpecker Wooliams, who adds a heartbroken resignation to a song about a disintegrating relationship.

It’s the less radio-friendly moments which are really interesting though. ‘Thymethymethyme’ has a time signature even weirder than it’s title (it feels like eleven-ish beats to the bar, which is mental). Ghostpoet’s wordplay is generally more about space and atmosphere than devastating delivery, but managing to keep a flow over this rhythm is a testament to his talent. Lyrically it’s another doomed relationship scenario, although Ghostpoet’s tangential lyrical style means it also ends up covering the stresses caused by expensive London rents.

‘Sloth Trot’ is apparently his “attempt at experimental, psychedelic rock”, although it sounds more like Boards of Canada remixing Radiohead’s ‘Pyramid Song’; a languid nod-out track where even the odd bit of jerky discordant guitar manages to sound utterly chilled. The similarly slow-paced ‘Dorsal Morsel’ comes close to stagnation, but even here a sudden electronic arpeggiation sets it ticking along with the smooth accuracy of a bloody expensive watch.

Piano takes centre-stage on a couple of the album’s best tracks. A fantastically doom-laden ivory riff sparks off the brilliant ‘Msi Musmid’, with references to Skodas and dim sum (read the title backwards) highlighting Ghostpoet’s refusal to abandon everyday concerns (“If I try put on a facade or an alter-ego, I’ve got to keep that up for five, ten years – I don’t want to do that!” is how he put it in a recent interview). It finishes with a digital cacophony that sounds like everyone’s internet connections jamming at once, before the gentle piano hook of ’12 Deaf’, which also features sweetly soft vocals from The Invisible’s Dave Okumu, takes things down a notch.

Closing track ‘Comatose’ sums up all that’s excellent about this album. Just as you think it’s about to float away like dust caught in a beam of sunlight, a wonderfully manic electronic rhythm bursts in with a string quartet, bringing things to a glorious conclusion. In keeping with the general mood it’s also pretty dark, featuring not only hints at suicide but also the most memorable verse on the album:

Asked to put the record in a nutshell, Ghostpoet responded: “It’s a chance for me to mumble over quirky sounds”. It’s something of a humblebrag but it’s also bluntly accurate in terms of the specific niche he inhabits. His Twitter account, as well as providing informative dispatches on the conversational habits of East London cabbies, often functions as a sounding board for him and his followers to exchange music tips, while his NTS radio show demonstrates a roving taste.

It’s this obvious love of music that permeates ‘Some Say I So I Say Light’ and makes it such an attractive proposition to fellow enthusiasts. Mumbling quirkiness never sounded so good. 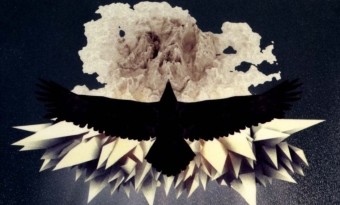 The avant-garde, like a coastal Devonshire town that's all cream teas on one side and cheap heroin on the other, can be enjoyable to visit but not necessarily somewhere you want to stay (you can reverse the tea and heroin in that sentence depending on your preference). I enjoy a bit of Albert Ayler or Meredith Monk as much as the next man, but the emphasis is on 'a bit' - more than an album at a time and my brain starts foaming. So it's a testament to the unrelenting quality of Colin Stetson's third solo album that I've pretty much been listening to it on repeat for a week. Any periodic breaks have only occurred because it's such an emotionally loaded piece of work, with an overdose potentially making you feel like you've swallowed a funeral. A session musician who's played with everyone from Tom Waits and David Byrne to Arcade Fire and LCD Soundsystem, Stetson's weapon of choice is the bass saxophone, with some of his arsenal so big you imagine playing them being like attempting to blow a tune through Brian Blessed. His dedication to the instrument has led to him developing an incredible circular breathing technique, which allows him to play multiphonics through both the keys and valves whilst simultaneously singing through the reed. 'To See More Light', the final part of his 'New History Warfare' trilogy, sees him producing noises that by his own admission he "couldn't have possibly recorded before", captured using a series of mics placed not just near the bell of the saxophone but on his own throat among other places. The effect is, quite frankly, extraordinary. Nowhere more so than on the track 'Hunted'. Here his formula is tweaked to its most potent potential, a mixture of throbbing bass tones, ebbing and flowing tremeloes and the occasional guttural roar, with his reed-filtered vocals floating serenely over the top. At times it's almost violently powerful, while at others the sound softens, lulling you into an almost hypnotic comfort, before Stetson suddenly howls into his instrument like he can't hold it in any longer with such force that it feels like being punched in the gut. Completely free of any lyrical narrative, it's nonetheless the most emotionally charged piece of music I've heard all year; the anguished yowls could almost be coming from a wounded animal or a bereaved mother rather than thirty-odd lbs of brushed brass. It's an intensely expressive noise that creeps into your ears and blackens your heart, stopping only to spike your tear ducts along the way. 'High Above A Grey Green Sea' is equally incredible, although a tad less visceral. Stetson's voice is more prominent, and the overall effect is beautiful and haunting; it's the sort of music that might come rushing in with the wind while you're standing on top of a cliff. Possibly before jumping off it. The plethora of microphones means that Stetson's breathing almost becomes an instrument in itself, and a huge influx of breath kicks off 'In Mirrors', a cautious piece dripping with tension that's not unlike some of Krzysztof Komeda's more sinister soundtrack work. 'Brute' is a different (and aptly-titled) beast altogether; Stetson may as well be playing a fucking chainsaw as loud percussive taps scuttle about like rats in the background. It descends into a nasty dark-funk strut before quickening again into the bastard son of free jazz and black metal, complete with gruff 'doom claw' bellowing courtesy of Bon Iver man Justin Vernon (yes, really). After that, 'Among the Sef' is like someone opening the curtains of a darkened teenage bedroom, with the music in a major key and higher register while Glass-y repetitive phrases flutter around like confused geese. 'Who The Waves Are Roaring For', meanwhile, sounds like Stetson's squeezed all of Sigur Rós into his saxophone. The centrepiece is the fifteen-minute title track - the guy must have lungs like a bloody rhino's - based around a beautiful phrase that circles itself like a dizzy drunk next to a dark canal, occasionally bending out of key while lurching dangerously towards the water. He also demonstrates the ability to hit bass notes lower than your toes (which, if you have your stereo equalized correctly, should start rattling like frozen peas in the empty skull of a dead mole around the eight-minute mark) before eventually ending on an almost comical, Penderecki-esque major chord. The Vernon-sung gospel cover 'What Are They Doing In Heaven' is a bit of an anomaly, presumably there to frame Stetson's ruminations about the "instinctual need we’ve always had of creating these dreams of afterlife, because we can’t conceive of our eyes being shut". Then there's 'This Bed Of Shattered Bone', a brief moment of gentle zen on an otherwise turbulent journey. The final piece, 'Part Of Me Apart From You', is like listening to the dying breaths of a mighty beast, complete with the odd speaker-shattering death rattle. There's an air about the major key resolution that almost suggests a final acceptance of death after a traumatic struggle. Apparently the album is partially inspired by Stetson's increasing perception of his own decreasing time on Earth. “Gone are the days of invincibility," he puts it, "and shepherded in are days of mortality". Maybe so, but the statements he makes here are as immortal as they come.
Read More