The delightfully named Frau Pouch are a post-punk three-piece that fill their music with surreal imagery, upbeat drums and filthy dirty bass lines. On their recently released Fairymares they chuck out ten songs of short sharp weirdness that’ll nestle into your brain-box like a very welcome chocolate coated sparrow.

The trio, consisting of vocalist/guitarist Joe Wise (who is also in the excellent Punching Swans), drummer Suzanne Freeman and bassist Ollie Crook, describe their music as ‘no wave, sci-fi loving, art punk noise’, which is actually quite apt. I’d also describe it as sounding like The Brothers Grimm on cheap speed. The witch from ‘Hansel and Gretel’ would bloody love to have Fairymares playing in the background as she cooks up another lovely child-pie.

Lyrically Fairymares does exactly what the album title suggests; it’s a collection of twisted, sugar rush fairytales that play out like they’ve drunk far too much coffee. To my own caffeine-damaged image banks the tracks recall the horror manga of Hideshi Hino.

The lyrics, like the artwork of Hino, appear at first cartoonish and childlike but soon create a strange and unsettling tension. Especially so when married to the jutting rusty-knife-sharp music that encompasses the words like flesh around a swollen wound.

As the weird tales of ‘Ham Planet’ and ‘Cat Curfew’ unfurl, a discomforting darkness emerges through the bouncy fun that keeps the songs well inside the potentially fatal boundaries of overbearing ‘quirkiness’; a boundary that a lesser band could easily fall headfirst over and disappear forever into the bleak pit of annoyance.

Fairymares’ opening track ‘Biscuit Beard’ (which was featured in our ‘Single Minded’ column back in September) tells the truly tragic tale of a man who is shunned for gathering biscuit crumbs in his facial bush, only to find redemption and social acceptance having dipped his delicious beard into a hot cup of tea. It’s heartbreaking and emotional stuff.

‘Burn Baby”s stabbing and angular rhythm will force its way into your ears and refuse to leave with a blunt insistence. It’s here that the lyrics conjure up the strongest link to the work of Hideshi Hino, most notably the disturbing ‘Hell Baby’. The song mirrors the manga’s vengeful mutant-baby theme and strange sickly sweet veneer.

Delve deeper into its weird world and you’ll expose 17 minutes of breakneck noise-rock oddness, a murky and distorted treat made up of melted down Wham bars and broken bottles, perfect for you to have a chew on. It’s delicious, but painful to the tender mouth – yes you’ll be rewarded with deep cuts to the hands and gums, but also a lovely aftertaste of sugar and blood.

Arca's reflective 'Arca' is a hall of mirrors... 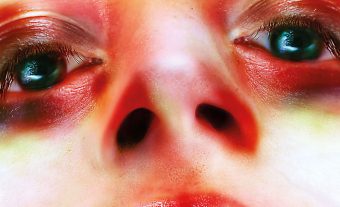 Personal yet impenetrable, Arca's fourth album juxtaposes moments of sensual intimacy with a straight up smack in the earhole...
Read More