In the first of a new round-up of electronic and club-friendly sounds, Jamie Miller gathers together a handful of his favourite new tracks (before buggering off on holiday to Crete…)

The latest release by DJ Marfox on the spiritual home of the ghetto sound of Lisbon, Principe Discos, is a dizzying journey through house, techno and pop paired with loping and taut Afro-Portuguese drum patterns of kudoro and tarraxinha. If you can stay on board with the madness this is one of the most rewarding club records of the year and will remarkably make you crave more flute in your life, which in itself is a reason to listen.

London’s Bala Club night residents Kamixlo, Uli K and Endgame are pushing new sounds with no regards for genre in their DJ sets and this attitude is present throughout this compilation of their own and various kindred spirits’ productions. Expect reggaeton, pop, techno, grime and US rap influences but also expect the unexpected, as pretty much anything goes from these club kids as long as they’re having fun.

Trim – Before I Lied

Perennial outsider and veteran grime MC, Trim is back this time on a large slab of weirdness produced by techno wonder kid, Happa. Only Trim could could sound this good on some gloopy weirdness. It’s out on James Blake’s 1-800-Dinosaur label so perhaps he might get the recognition he’s deserved for so long.

For a man known for his groundbreaking videos, this one has been a long time coming. This video precedes his forthcoming Cheetah EP, and was supposedly made by an Irish 12-year-old found via youtube. I’m never sure when Richard D. James is taking the piss but regardless it’s a good video and the track itself is, well, Aphex Twin.

This is the first release from Venus X’s influential New York party and now label GHE20G0TH1K and is run through ballroom with some Jersey club, rap and more, all while sounding brooding and dark as hell. The ethos of the party and internet music production/sharing are both big touchstones here so if you like the music investigate the politics.

OK, so after all that, let’s get to a nice and simple straight-up house mix featuring plenty of classic sounds from the ’90s and some more productions from those who revere them. If summer actually happens this little mix from Gnork will be perfect. 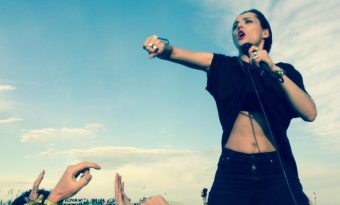 Once again droves of excitable British music fans swarmed into Barcelona for one of Europe's finest festivals: Primavera Sound. We were among them.
Read More