Considering the ubiquity of Fetty Wap’s song of the same name this year, you’d think Benjamin A.D. would’ve thought of a different title. Not that many people would mistake this track for that one. The vocal tones are distinctively Lahndahn, and underpinned with a Portishead shuffle. ‘Come My Way’ has bigger ideas than it manages to convey, but it’s a steady start to what he promises will be a single-a-month release schedule. Nicholas Burman

Disclaimer: This is a first for Single-Minded, as we feature a track that one of us actually played on. Luckily my clattering drums fail to detract from a ridiculously catchy tune by FVC, thanks largely to a chorus that doesn’t so much stick a foot in the door as force itself in, flick the kettle on and settle in for the night. The lyrics are poignantly relatable (“Thought I was dreaming when you called my name / I guess I was”) and the keys add some perky texture, plus I even manage a half-decent fill just before the two-minute mark. Get in. Kier Wiater Carnihan

Ghost Writerz – For The Love / Wind Up Your Waist

A lively double a-side from Tru Thoughts’ Ghost Writerz, which provides a warming memory of festival season as the nights draw in. Although to be honest there are enough guest vocalists across these two tracks for GWz to set up their own damn festival. ‘For The Love’ features the talents of Amy True and a tasty sample of I Roy’s ‘Black Man Time’ on the Roots Manuva-style chorus, while ‘Wind Up Your Waist’ is an exotic-sounding shuffle that sounds like a Middle Eastern take on dancehall. A nice warmer-upper if you’re still avoiding putting the heating on. KWC

The snottiest, filthiest thing I’ve encountered since I found last winter’s handkerchief in my parka pocket earlier this week. Canadian punks Greys not only knock out a raucous racket, but they sound like they’re having tons of fun doing it, which is what makes ‘The Voyeur’ so scabrously addictive. KWC

The latest track by this hotly-tipped Dutch duo starts off sounding like any other run-of-the-mill electro-pop being rattled out at the moment, and I almost turned it off after a minute. Luckily I stuck with it as the wonky key-bashing that then occurs skews the whole shebang, placing it at a much more appealing angle. KWC

The sum of its parts – a lyrical note from Wiley´s ‘Bow E3’, and, as one mate pointed out, musically indebted to early Dizzee Rascal, ‘Endz’ is a pretty solid slice of grime. I’m hoping Novelist returns to the more exhilarating futurism of ‘1 Sec’ sometime soon though. NB

Yussssssss. Breakbeat rhythms for the win. No more deep house. Booooo. Zomby, Special Request and Machinedrum are breathing some life back into the genre at the moment. Meanwhile, Prayer is here for the peak come-up period, mingling trip-hop sensibilities into the mix. I’m not sold on those choral keys but other than that, a nice palate cleanser. NB

As its name implies, ´Flicker´ isn’t so much a song as an idea. A short 1:50 production spree, it actually builds into quite a nice atmosphere. Based on previous releases, I’m glad he stopped before the guest vocal came in. NB

Startzy – Why Would I Care

Whoever can come up with jewels like the below is well worth some attention. This track balances pretty flourishes with gritty production values rather well, and reminds me of the vibrancy of the UK’s capital under a damp Autumn sky. Perfect timing, then. NB

Whoever said you can't have your cake and eat it probably didn't know how to bake #Focused https://t.co/hPg3llSCPk

So smooth it could’ve been been squirted out by a silkworm, the luxurious production of ‘Who’s Thinking’ provides the perfect cushioning for Hypeman Sage’s impeccably insouciant vocal delivery. He’s the Sage part of Subculture Sage, with drummer/producer Subculture Sounds laying on the beats, and they sound like they’re made for each other on this evidence. If there’s a quicker way to achieve absolute relaxation than listening to ‘Who’s Thinking’ (that doesn’t involve a hot tub, a masseuse and a blim of opium), I’d like to hear it. KWC

The choppy percussive rhythm lends ‘Concrete Djungle’ an enticing edge. This one´s for fans of Goat when they’re being less ethereal, and for fans of Drenge when they´re being a little weirder than normal. NB

Wild Palms is one of those names that sounds like it came from a Pitchfork band name generator, and as such I have no idea whether I’ve heard these guys before or not. Apparently they’ve been missing in action for the last five years, burrowed away with a supply of promising influences like Silver Apples, Portishead, Madvillain and, judging by the title, a certain Italian soundtrack composer. ‘Ennio’ sounds nothing like any of them but it’s still enjoyable enough, a slinky and well-produced number that’s perhaps just a little too inoffensive. KWC 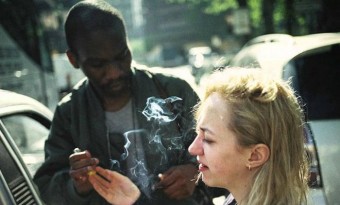 This week's singles column features the rise of Hunck, the return of Hype Williams, and "the most ultimate embodiment of ´blog music´ I've ever heard..."
Read More