First, a piece of advice. You know how most gigs advertise ‘doors at 7.30pm’ but the music doesn’t actually start until about an hour later, when someone remembers to tell the support band they’re supposed to be on stage? Well, sometimes 7.30pm actually means 7.30pm; especially at venues like Barbican, Queen Elizabeth Hall and, unfortunately for yours truly, LSO St Luke’s.

If you don’t heed that warning, you run the risk of making like me and missing the support act. And when the support act is as good as Ex Easter Island Head, as it was here, that’s a really stupid thing to do. The mallet-wielding Liverpudlians produce fantastically percussive and original performances, and if you ever have the opportunity to see them, take it.

Not least because they always seem to be playing with great artists; last time I caught them was supporting an astonishing recent gig by Colin Stetson & Sarah Neufeld, and here they entertained smarter and more punctual people than myself before Colleen.

I first heard Colleen, aka Cécile Schott, on one of the Leaf Label’s excellent samplers many moons ago, and she’s been ploughing an ambient furrow through the alternative music scene for over a decade now, with her most recent album Captain of None coming out on Chicago’s excellent Thrill Jockey two months ago.

In many ways, the album’s relatively austere instrumentation makes it especially suited to live replication, employing little more than her voice, her favoured viola da gamba, an occasional burst of melodica and percussion, and a moogerfooger delay pedal to tie it all together.

However, at the start it doesn’t seem well suited at all. Opening with one of the finest tracks on the album, ‘Holding Horses’, seems like a smart idea, but while the individual plucked phrases are all alluring, they stubbornly refuse to sync with each other. Colleen’s dub-like bassline just about anchors everything, but it takes a while before the different elements finally shift into satisfying, crystalline focus.

The first six tracks mirror the album’s opening, with the enchanting ‘I’m Kin’ seeing Colleen singing hushed harmonies with herself, before the song metamorphoses into a shivery, deep-sea instrumental that glimmers in the reverent atmosphere. ‘This Hammer Breaks’ then comes across like a percussive version of Four Tet’s ‘Spirit Fingers’, with the rhythms gradually manipulated into a bewildering sheet of raindrops; until a sudden, unexpected scree causing one audience member to throw her hands to her ears in shock.

The flickering thumbs and slightly gauche melodica of ‘Salina Stars’ is a little reminiscent of Young Marble Giants, but after this Colleen seems to relax into the performance, becoming markedly more chatty in between songs. She attributes her negotiation of some tricky pedal manipulation to having recently started yoga, before self-deprecatingly dismissing the statement with a wry, “… but obviously you don’t give a shit about that.”

It’s her non-speaking voice that is the real revelation though. Having made her name as an instrumental artist, it’s surprising just how accomplished her singing is, possessed of both clipped clarity and a diaphanous quality that makes it subtly bewitching. The way she layers her voice on tracks like ‘Lighthouse’ adds another dimension too, with the hissing sibilance of certain phrases becoming as expressive an element as the actual melodies themselves.

Her voice on the first non-Captain Of None track of the night, ‘The Weighing Of The Heart’, is as intangibly distinct and illuminative as a candle, and also sees her bowing the viola da gamba for the first time in rapid fashion; watching the bow dart across the strings is like witnessing a human sewing machine. She follows it with a haunting version of ‘O Willow Waly’ from Jack Clayton’s 1961 film The Innocents, with the song’s traditional structure sounding distinctive against Colleen’s more impressionistic style.

The final track, ‘Captain of None’, sees her vocals soaring as the sky darkens through St Luke’s window behind her, before she returns for a well-received encore. ‘Geometria Del Universo”s accelerandos take us into an arpeggiated blur, like speeding down a country road at night, before another noirish cinematic cover, ‘Once Upon a Time There Was a Pretty Fly’ (from The Night of the Hunter), provides the highlight of the night, a dazzling version that is genuinely captivating.

The performance ends as it began, with some slightly awkward loops partially disturbing the tranquil flamenco undertones of ‘Breaking Up The Earth’, before it develops into a Mice Parade-style zoetrope,complete with twisting, hypnotic poly-rhythms.

After a quip about the coloured vinyl for sale at the merch stand, Colleen thanks us all for choosing her over the Arthur Russell Instrumentals show taking place down the road at Islington Assembly Hall. Having now also seen said Russell retrospective, I can confirm that everyone who opted for LSO St Luke’s made the right choice. Especially if they turned up at 7.30pm sharp. 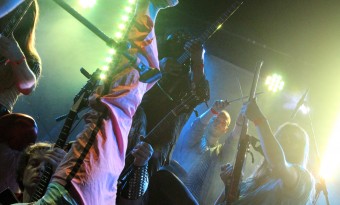 We're still taping ourselves back together after being obliterated by the savage carnival that is Raw Power festival. Find out just what made it so special...
Read More