Morrissey has been away since 2009’s Years Of Refusal, and this month everyone’s favourite glottal vegetarian crooner returned with a new LP, World Peace is None of Your Business. ‘WPINOYB’ sees Steven Patrick Morrissey take a trip to France with producer Joe Chiccarelli, venturing into the realms of spoken word and Latin American rhythms with a fork-in-the-road record that veers from frightful to sublime.

Now then, first thing’s first: most of the writing here is excellent. Morrissey has been eating his Weetabix: “On the coastal shore I’m sure you’d break down if you saw / An abhorrent torrent crashing as it pours” (‘Drag The River’). He shines on ‘Neal Cassady Drops Dead’, ascending above the bloated guitar backing to deliver a fine example of his scathing lyrical lilt. There is a distinct stink of The Smiths on ‘Istanbul’ and ‘Oboe Concerto,’ and Moz writes with a creeping, Fagin-like limp on the theatrical ‘Smiler With Knife’ and ‘Scandinavia’.

‘Neal Cassady Drops Dead’ is probably the best song here, along with ‘Kiss Me A Lot’, the flawed ‘I’m Not A Man’ and ‘Drag The River’. At times the shiny, gloating backing and pristine production can overpower some of the vocal melodies and best lines like on ‘Kick The Bride Down The Aisle’ and ‘Mountjoy’ – “Brendan Behan’s laughter rings, for what he had or hadn’t done” – but for the most part Morrissey holds his own.

When Morrissey churns out smacking lines like a newspaper man, he seems angry, and makes you feel as welcome as an undiagnosed scrotal ailment. He has a face on like someone just gave him an XL bacon double cheeseburger for his tea. His writing style was always intimate, delicate and shy, it was the frailty and humanity of his lyrics that people always related to. Now he is more parochial, clinical and emotionally detached; Morrissey is full of bounding ego, he is more patronising. The occasional dud lines on this record sound like someone pretending to write like Morrissey, like Morrissey recycling his own clichés.

The gravelly, percussion led title track is wet through with glaringly obvious lyricism, almost a pastiche of the parochial streak that started with ‘Meat Is Murder’. The dull ‘Staircase At The University’ reads like a smug ‘Cemetery Gates’ while the cinematic identity crisis of ‘Art Hounds’ clashes with the headstrong confidence that flows through the rest of the album.

The title track sees Jesse Tobias replace guitarist Alain Whyte, a solid pop songwriter who has worked on the factory floor for the likes of Madonna and Rihanna. After ditching love-you-long-time collaborators Tony Visconti, Johnny Marr and now Whyte, it seems Moz has a thing for sacking people, like a more chilled out Mark E. Smith on the Ovaltine. From the outset, this latest cabinet re-shuffle sounds like a mistake. Tobias is a seasoned stadium guitarist who has toured with the likes of Red Hot Chili Peppers; he is the definition of a super-session musician. However, there is nothing super about session musicians. All session musicians have the capability to do exactly as they are told, but few have the ability to demonstrate distinct charisma and stylistic flair. Skin-tight and blandly agreeable, there aren’t any other problems with this new backing band (except for the pesky Phoenix Nights-style electric organ that keeps popping up to ruin things).

Steven retains his vocal style and mannerisms, but he is less wobbly and more assertive. His delivery is deeper, stronger and more substantial, albeit less loveable, and he soars above his over-earnest, Sunday-best backing band to deliver his best record since You Are The Quarry. 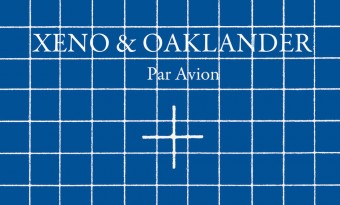 Electronic duo Xeno & Oaklander release their first record for Ghostly International, and it reveals more and more with every listen...
Read More