We’re extremely chuffed to announce that our guest editor this week is Graham Jones, the brain behind the acclaimed book/film Last Shop Standing: Whatever Happened to Record Shops?, a comprehensive and engaging look at how the UK went from having over 2000 independent record shops in the 1980s to just 269 by 2009. The revised and updated sixth edition of the book, which comes out on April 22nd, explores how this demise has been stemmed, indeed partially reversed, with a raft of new record shops opening since the book’s original publication.

The DVD version of Last Shop Standing features interviews with the likes of Johnny Marr, Richard Hawley and Paul Weller, and was the official film of Record Store Day 2013. In the first of his pieces for The-Monitors, Jones argues that while many record labels may congratulate themselves for their efforts towards this annual event, it’s their actions on the other 364 days of the year which count…

With Record Store Day taking place on April 19th, the UK record companies have again done a magnificent job of supporting the independent record shops with over 700 exclusive releases you can only obtain from your local record shop. They can go away, pat themselves on the back on a job well done. Maybe the major record companies think that by supporting the shops one day a year they are doing their bit to keep record shops trading on our high street. I argue that one day a year is just not good enough. Why not have exclusive releases throughout the year only available from record shops to encourage people to step through the door instead of offering them as online exclusives?

Over the last few years there has been a worrying trend for record companies to release product exclusively online, a real kick in the teeth for the shops. Artists such as Beyoncé, who released her album in advance exclusively on iTunes, don’t help the situation. A record shop can only be as good as the stock it has to sell. It is time for the major record companies to decide whether they care about having a music presence on the High Street. If the answer is yes then it is about time they did something about it.

A worrying trend has emerged over the last few years of record companies of selling direct to the consumer. By cutting the record shop out, it is having having a detrimental effect on their business. Two recent releases are typical of the problems shops face. In January 2014 the Small Faces released a four-CD box set chronicling their Immediate Records recordings, Here Come the Nice: The Immediate Years 1967-1969, which featured 75 tracks and a considerable amount of extra material. Only 3,000 copies of the collection were made available and sold exclusively direct to consumer via the internet. Most record shops had Small Faces fans who wanted to buy the box set. Despite record shops spending thousands of pounds a year with them they were all refused the opportunity to buy copies to keep their loyal customers happy.

Another example was the new Jesus and Mary Chain eleven album Complete Collection vinyl box. Only 1500 were produced, and Jesus and Mary Chain is a band who benefited greatly with support from independent record shops. With it being a vinyl box set you would think it would be ideal for record shops. Unfortunately for shops this was another ‘direct to consumer’ release. Many record shop customers do not wish to buy off the internet, they wish to support record shops; yet shops are forced to tell customers that they only way they could get these boxes was to open an account with an internet competitor. Even worse, when these customers bought from them they would then be targeted with offers on similar music related promotions.

What other industry treats its customers so shabbily? Imagine going into a cake shop and seeing a chocolate éclair. You ask for it only to be told that the cake shop has done a deal for all their chocolate éclairs to be sold by a supermarket. Utter madness. This policy is short term thinking. Unless the industry decides to let all releases be available in record shops then I would expect the decline in record shop numbers to start again very soon.

A disappearing interview with Disappears... 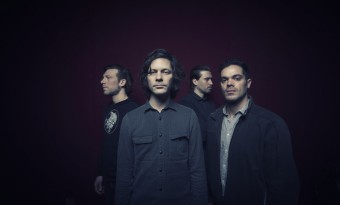 It seems fitting that a conversation with Chicago's Disappears would then disappear from the hard drive it was recorded onto, but we still managed to salvage these snatches with the inventive foursome...
Read More