3D printers have barely been around for five minutes and already sick fucks across the globes are utilising them to make not only working firearms but models of real live foetuses. So it’s good to know that some more tasteful types are exploring more pleasant applications of the technology, such as these wooden records.

Designer Amanda Ghassael showed taste as well as impressive technical skills by cutting The Velvet Underground’s ‘Sunday Morning’ onto Maple (weirdly, we’ve coincidentally listened to that album about five times in the last twelve hours. Although not on wood, admittedly). Below, you can also hear a wooden version of Radiohead’s ‘Idioteque’ too. Admittedly, they do both sound pretty shit, but I’d rather live in a world full of slightly ropey Velvets records than a world of gun-toting foetuses. But maybe that’s just me… 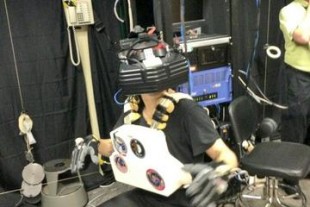 Skrillex was the lucky recipient of a trip to NASA's Johnson Space Center in Houston this week, where he ate space food, met astronauts and took a virtual space walk, although sadly wasn't blasted to Mars to play a final set with the Rover. Why was he there? Well, no one really knows. SPIN asked his publicist, who was as clueless as everyone else: ""I'm gonna be dead honest with you, they won't tell me why they went. In fact, I don't think THEY know why they went, basically they hit me up a year ago asking to give him a tour, I can only assume that's what's going on." Personally we're hoping for an EDM remix of the Close Encounters alien communication music...
Read More