The first HMV shops are closing, with Deloitte announcing that 66 outlets around the UK will be shutting their doors. When those doors re-open they may well be attached to a supermarket or a pound shop. A range of supermarkets have expressed an interest in various premises (with Iceland seeming the most keen), while River Island, TopShop and a raft of pound shops all sniffing around too. Sigh.

Elsewhere, the HMV tweeter who caused such a storm with the #hmvXFactorFiring hashtag last week has revealed herself to be former employee Poppy Rose. She posted the following on her personal Twitter account:

“It’s been an amazing two and a bit years with HMV. Such a shame it had to end on that note. Someone had to speak! I would apologise for the #hmvXFactorFiring tweets but I felt like someone had to speak. As someone without a family to support/no mortgage I felt that I was the safest person to do so. Not to mention, I wanted to show the power of Social Media to those who refused to be educated.

“Just to set something straight, I did not ‘hijack’ the hmv twitter account. I actually assumed sole responsibility of Twitter and Facebook over two years ago, as an intern. When asked, I gladly provided the password to head office. I also set another member of staff up as a manager on Facebook, and removed myself from the admin list. I didn’t resist any requests to cooperate.

“Since my internship started, I worked tirelessly to educate the business of the importance of Social Media – not as a short-term commercial tool, but as a tool to build and strengthen the customer relationship, and to gain invaluable real-time feedback from the consumers that have kept us going for over 91 years. While many colleagues understood and supported this, it was the more senior members of staff who never seemed to grasp its importance.

“I hoped that today’s actions would finally show them the true power and importance of Social Media, and I hope they’re finally listening. Now, I should probably go and hide for a while… Thank you so much for your supportive tweets! Much love to the HMV staff and customers.” 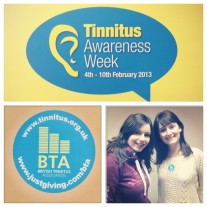 As someone who suffers from fairly bad tinnitus, having its existence shoved in my face is not a particularly enjoyable experience as I spend most of my time inventing ways of trying to ignore it. However, with many GPs largely ignorant of the condition's finer points, Tinnitus Awareness Week is an important way of rasing the profile of something that blights, in various forms, up to 10% of the population. And if you think that having a constant tone in your ears couldn't be anything more than irritant, be aware that it's driven many people to suicide. British Tinnitus Association ambassador Eddy Temple-Morris has written a nice update on his work to release a fund-raising album, potentially featuring work from famous sufferers such as Chris Martin and Noel Gallagher, here...
Read More